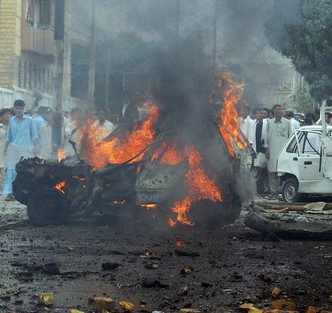 Wreckage and fires after a blast at a mosque in Quetta on the day of Eid, Aug 31: A video grab

A suicide blast destroyed Eid day peace in Quetta on Wednesday, Aug 31, killing at least 10 people. As many as 22 persons were injured in the blast on Gulistan Road in the Murriabad area of the city, local police chief Ahsan Mahboob said said.

Express Taliban reported on its web site that the attacker targeted a Shiite congregation that was offering Eid prayers in a mosque. The bomb was detonated when the people were returning home after prayers. The blast also destroyed 10 cars and several houses in the vicinity.

A police official said that it may be a sectarian attack as it took place in a Shiite dominant area.

Authorities fear a rise in the number of casualties and have declared an emergency at the Civil Hospital after the incident.

The Shiite community of Quetta has announced that it will observe seven days of mourning to condemn the attack.

Members of the Shiite community also gathered and staged a protest at the site of the blast where they chanted slogans against the government.