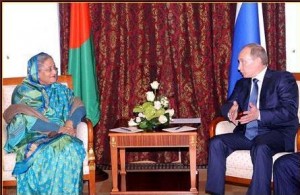 By Malladi Rama Rao
(This article was a publication of the Policy Research Group, Poreg)

South Asia is going to see generation of nuclear power in yet another country soon. Bangladesh has just signed an agreement with Russia for its first nuclear plant that would be designed to generate 2000 MW. India and Pakistan are the other two countries that have been generating nuclear power and both have turned nuclear powers. Sri Lanka is also tossing the idea of N- based electricity generation and is in talks with China to quench its power thirst.

Bangladesh too turned to China for help in its nuclear power programme when BNP supremo Khaleda Zia was the prime minister. Some negotiations took place but before any significant forward movement could take place, her betenoire Sheikh Hasina returned as prime minister of the country on 6 January 2009. And she was guided as much by nostalgia as realpolitik in clinching the deal with Russia which will see an investment of around $4 billion. More than 40 percent power plants in Bangladesh had been constructed by Russian assistance. Forty Russian soldiers died while de-mining the Chittagong Port after the Liberation war (1971). Hasina’s husband, M A Wazed Miah, was a reputed nuclear scientist. He passed away in 2009.

It is too early to say whether the plan will sail without encountering any hurdles from Awami League rivals and environment Ayatollahs.

Big Brother neighbour India is having trouble with environmentalists in setting up its mega nuclear power plant in collaboration with France at Jaitapur in its world famous Alphonso mango producing Western Maharashtra. When completed the plant would generate 9900 MW, which will be more than double the current nuclear capacity of 4, 780 MW.

Like India, Bangladesh is an electricity deficit State. Short-fall touches 2,000 MW during summers. Only about 47 percent of households have access to electricity. Decades-old gas-fired power plants are unable to generate enough electricity for the country’s 150 million people. With power shortages affecting production, the World Bank and the Asian Development Bank have cautioned that Bangladesh’s economy will suffer if more electricity is not generated to support industries and agriculture. It will be difficult to sustain the present growth rate of more than 5 per cent, said the high priests of development finance. .

HISTORY OF HOPE & DESPAIR
Noted Bangla nuclear physicist M. Aminul Islam says ‘The history of nuclear power reactor in Bangladesh is a forty-five year long history of hope and despair — a history of missed opportunities’. In the early sixties, a site for a reactor was selected at Rooppur in Pabna, on the banks of river Padma near the Hardinge Bridge. ‘As silent evidence, there stand some unused buildings on 294 acres acquired land — for the reactor complex, for the office and the residential colony’, he remarks.

The people of these lands were evacuated, compensation was paid and they were rehabilitated in nearby villages. What was more several techno-economic viability studies on nuclear power reactors, and many feasibility studies and surveys were carried out. Specific plans for the reactor were approved many times and even negotiations were held for financial closure with different countries. All the efforts came to a naught as nuclear power plant became a political and diplomatic football. ‘Although the prospect of building the reactor was bright, the implementation of the project never actually started because of either national or international reasons’, a Daily Star columnist says.

The dithering at the political level did not amuse Padma and the river has moved far away from Rooppur. It has shifted 1000 feet away from the site selected for locating the reactor and there are concerns now about the availability of water (as coolant for the reactor), according to a high level official of the Bangladesh Atomic Energy Commission. A survey has been launched to find a suitable point in the Padma for collecting water. The Commission is looking for a point in the river that can meet the requirement of water for the plant’s cooling system for the next 100 years.

Another problem, though not specific to Padma alone, is the flow of water which is not constant through out the year and in fact keeps varying sharply at different periods in a year.

During August-September, it carries 6-7 lakh cusecs but during March-April, the flow comes down to less than 30,000 cusec at the same point, says an official of Water Development Board (WDB) in Pabna. The solution, in his view, will come from building the long in works Padma Barrage.

“If the barrage is built, adequate water will be available in the river throughout the year and it will serve the proposed reactor,” the WDB official says. Ground water level is also being studied with tapping ground water being seen as an option.

HASINA’S POWER PLEDGE
Sheikh Hasina’s Awami League came to power in December 2008 elections with a promise to make the country power surplus. During the first year in office, the Awami League government laid out a plan to install roughly 9,000 megawatts — a good part of it coal-fired, a part of it nuclear powered, some gas-fired, and some by both gas and petroleum products. These initiatives demand more than $12 billion of investment.
Over the years, Bangladesh has come to rely mostly on natural gas based power plants (more than 90 per cent). Yet, the sector did not see any development under Khaleda rule. In fact, the plans to invite Indian conglomerate the House of Tatas to make big investments made no progress with row over gas availability and gas pricing policy. The Tatas have since rolled back their offer. Natural gas sector also is investment hungry. But no significant investment was made for gas exploration in the last decade.

REGIONAL POWER GRID
Energy security to Bangladesh will come from a regional power grid that taps into the Indian grid and North-east India’s hydro-electric power plants. It is building a 40 km power transmission line and a high voltage sub-station on the south-western border of the country that would enable it to receive Indian electricity.

The expectation in Dhaka and Delhi is that some 250 – 500 MW power will flow into the B’desh grid within two years. India power major NTPC will collaborate in setting up a 1,350 MW coal-fired power-plant in Mongla. Another 1,350 MW plant will come up in Chittagong with private sector’s participation.

Grandiose plans takes time to materialise. This is particularly so in Bangladesh, which is rocked by ‘instability and violence generated by Islamic fundamentalists’ to further political goals.

“Since 2009, different government agencies floated tenders for power projects totaling more than 3,000 MW. If the agencies could handle these bids efficiently, by now the majority of these projects would have been awarded to different contractors and it would have assured that at least by 2011, some of these projects would have started producing power. That would have meant that by 2011, the level of load-shedding would have decreased significantly — if not completely”, the progress card in a leading Dhaka daily said. The report was aptly titled ‘Great Expectations but Timid Implementation’.

That may not bring much consolation to the people. Because today demand is between 6000 and 6200 MW while the generation hovers between 4000 and 4600 MWs. The Hasina government is pinning much hope on private power projects; though the proposal has met with ‘encouraging’ response, private power will not be flowing into the grid for a long, long time because of time consuming bureaucratic processes.
.
Viewed against this scenario, Bangladesh’s plans to tap nuclear energy for power generation make sense. And make the Awami faithful to entertain hope that Hasina government will fulfill its poll promise of eliminating load shedding by the year 2014.

2. B’desh and Russia sign a memorandum of understanding (MoU) on May 13, 2009 in Dhaka
Russia agrees to supply materials and provide services in the field of nuclear fuel cycle. Russia also agrees to train and upgrade skills of personnel in reactor and radioactive waste management.

2. B’desh and Russia sign a protocol deal in October 2009 in Moscow on peaceful usage of atomic energy.

3. B’desh and Russia sign framework agreement in Moscow on May 21, 2010.
Under it, Bangladesh sought Russian cooperation in “design, construction and operation of nuclear power and research reactors, nuclear fuel supply, taking back the spent nuclear fuel and nuclear waste management, personnel training and capacity building for operation and maintenance of the plant, research, education and training of personnel in the Russian Federation in the field of the use of nuclear energy, development of innovative reactor technologies, and exploration and mining of uranium and thorium deposits”.

4. Bangladesh signs with Russia on Feb 24, 2011 a primary deal for installing a 2,000 MW nuclear power plant at Rooppur in Pabna.

DEAL DETAILS
1. The first of two nuclear power plants (NPPs) will be completed in 2017-18 (That is five years from the date of signing final accord)
2. It will be a third generation reactor.
3. The first plant will generate 1000 MW. Cost will be $1.5 to 2 billion.
4. Bangladesh Atomic Energy Commission prepared the action plan for executing the NPP
5. Russia will manage the spent-fuel and recycle it.

Bangladesh signed bilateral treaties for peaceful use of atomic energy with a number of countries including India.

Across the globe, there are 443 nuclear power reactors in 32 countries (if under construction are factored in the number of N-power reactors will be 520 across 37 countries).

Nuclear power accounts for approximately 17% of total electricity generation in the world.