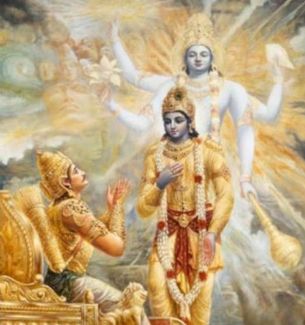 “The Bhagwad Gita is the first manual on management.” This statement may startle many modern-day managers and students of management alike. It baffled me all the more for coming from a businessman who had had formal schooling of sorts. I had run into Lala Gian Chand Gulati at Jagadhri in Haryana totally by accident. How did he manage his small-cum-medium business? How many persons worked for him? His reply was: “I manage my business according to what I have learnt from the Bhagwad Gita. About 100 persons work for my company, and they all follow the teachings of the Gita strictly.”

It somehow looked a bit far-fetched that the ancient Bhagwad Gita should contain tips for present-day managers. But, then, many things about Lalaji did not make sense to the “modern” me. For instance, if you want to meet an industrialist-businessman, no matter how small or big, where would you look for him? As likely as not, and to go by my own experience, you will find him at one of three places: his workshop/office, house or some social gathering.

Therefore, when I met Lalaji in a hut at Jagadhri of a Muslim employee celebrating the wedding of his daughter, I refused to believe he was an entrepreneur. But once assured that he was one, I told myself that I could not have found a better entrepreneur than one who went gay at the wedding of the daughter of one of his employees as though she were his own daughter! “But how is she different from my own daughter?” he asked me tartly.
Lalaji’s largeness of heart did him credit and came as a salutary spark in a dismal atmosphere squirted with greed and economic ill-will. Short, stockily built and decidedly good-looking (how much more so he must have been in his youth!), he had the strained and guilty air of the perpetually well-intentioned. It was his abiding smile that seemed to ease the inner tension.

Why was he so interested in helping the poor of every community and donating generously to every humanitarian cause when many an industrialist-businessman, infinitely rich, was obsessed only with making more and more money? “If they had been through half of what I have experienced, the doors of their houses too would have remained open for the needy,” he said with a beatific smile.

It was clear that Lalaji found pleasure even in far-from-pleasant memories of many people and past events, and this brought to his mind a compensatory balance for the loss of old friends (even those who ditched him!) and associates of early manhood and middle age, as also those recollections associated with his native place replete with legend and folklore that were grist to after-dinner discussions.

Lalaji was born at Sheikhuwal in Sargodha district, now in Pakistan. His father had done prosperous business in metal ware. He was the eldest of two brothers and three sisters. When he was in Class VIII in a school at Gerot, a nearby town, his father died, and Lalaji joined the family business. “Yet I managed to study up to Class X,” Lalaji told me with a tinge of pride in his voice. “That was in 1942. I used to go round various places, sell brass utensils and got paid for them after the harvest; that was the practice those days. The going was pretty good. Then came Partition,” Lalaji said in a tone that suggested he was referring to some picnic rather than to a catastrophe.

Partition was indeed a tragedy for the Indian Sub-continent, but a greater one for Lalaji. He lost his all, save his equanimity. A mob surrounded his house and asked him to choose between conversion and death. Lalaji, however, did not have to make a choice, for the same evening military trucks arrived from the Khashab tehsil headquarters. But the soldiers who had brought them too were Muslims, and they had brought with them their own choice: the besieged would be evacuated to a safe place but without their personal effects! Lalaji, his wife and two infant daughters were transported safely to a camp at Sargodha in the clothes they wore. They stayed in the camp for 25 days.

The storm still loured, the wind howled, and waters of communal frenzy dashed wildly against the rocks of humanity. Yet Lalaji, like many others, believed that the storm would veer away and peace would return. He would not otherwise have deposited his trunk with a neighbour. Finally, he and his family left for Ambala en route to Yamunanagar, also in Haryana, to which place his brother-in-law had already gone. But tragedy dogged Lalaji all the way: his younger daughter, barely 18 months old, could not get milk on the way, developed jaundice and was dead by the time the family arrived at Ambala. Lalaji took the loss with wonted stoicism.

“Once at Yamunanagar, I started working as a manual labourer in the timber market,” he recalled without bitterness. Since the daily wage was directly linked to the number of logs one carried, he tried to carry every day more logs than he physically could, and ended up with a swollen neck. It was as if work was the answer to some need that gnawed at his heart. Who would have thought that treacherous Time would one day push him to the outer fringe of life? Brought up on desi ghee, Lalaji and his family now had to subsist on makai ki roti with a radish to go with it! Yet they did not demur. “I kept telling my wife and daughter that if good days did not last bad days would not either,” Lalaji told me with a smile.

Apropos of nothing, Lalaji asked: “Who am I to pass a moral judgment on others?” It is easy to say that Lalaji possessed a compassionate understanding of human motives, even ignoble ones, but that would give no real indication of his strength of feeling, power of observation, or of the way his intelligence served to ignite the dynamite of experience. It was as though the incompatibilities of two eras had simply fought to a standstill within him.

Before leaving his native place, Lalaji had hurriedly got all ornaments in his house melted, and deposited the gold with a person who had seemed well enough protected to be expected to arrive in India safely. But when he did, it was only to tell Lalaji that the gold held in trust had been stolen! The fact that nothing else seemed to have been stolen from him was a giveaway, but Lalaji was not one to disbelieve the explanation and continued to have the best of relations with the person who had contributed so substantially to his reduction to financial straits. His enormous gift was to combine a sophistication of vision with an unequivocal love of justice, even economic justice. The accuracy, wit and tact of his observations seldom succeeded in concealing or distorting his moral passion; rather, they were at its service.

After working for a year in the timber market, Lalaji opened, in collaboration with some immigrant relations, a shop. It prospered for 12 years and then the partnership was dissolved for no fault of Lalaji. Thereafter, Lalaji started on a modest scale a factory for making brass utensils, again in partnership that looks in retrospect doomed. Finally, he borrowed from moneylenders and started a factory that, by modern standards, might not be called one even though his monthly earnings were pretty high by the standards of those days.

Yet, neither he nor his family could afford any luxury because “everybody in need had a right to a share of what I earned”. He continued to play host to the leading lights of the freedom movement who visited Jagadhri, as also others. His unfailing courtesy, charm and willingness to serve all made him a household name, particularly among the poorer sections of the people of Jagadhri.

Agreed there was slump in brassware business; even so, how come that he earned much less than his competitors? “Where black money was involved, I would rather not do business. How can I expect honesty of another person until I am honest myself?” Lalaji countered.

That moment I understood why it was that, for all his reputation, he looked undervalued in the business community. After all, the large moral resonance of his utterances tended very often to get miniaturized by misunderstanding.

However, what he seemed to have learnt from his favorite Bhagwad Gita and his own pathetic experiences in an honorable but, in an ambitious man’s terms, doomed idea of a businessman’s honesty proved his undoing in a venal age. That was the time when plastic buckets were in far greater demand than those made of brass, and so Lalaji diversified his business and opened a shop to sell the articles he made.

“I would be happy, as would my 100 employees be, even if what is honestly earned was small, rather than try to amass wealth through dishonest means,” Lalaji summed up his philosophy.

Anticipating my next question, he said: “I have already told you that I have studied only up to Class X. Therefore, I know nothing about modern management methods of which I have only heard. I follow what the Bhagwad Gita has taught me about management, and I have not done badly for that. The philosophy of nishkarma karma does not undermine the achievement motive or make people fatalists by its stress on other-worldliness. The Gita advocates action, relentless action regardless of the rewards. It preaches the mantra of karma yoga and defines it as dexterity in action; ‘yagahe karmasu kaushalam’ gives new dignity to work. No work is inferior to any other; every worker is a karma yogi. “

It looked as though Lalaji was thinking aloud rather than addressing me; he did not look at me at all. “The Gita exhorts people to work ceaselessly not merely because work is worship but also because it comes naturally to human beings. Lord Krishna said if he did not work, the worlds would perish. The Gita preaches devotion to duty and to one’s calling, makes work sacred, and thus the stigma attached to menial work is removed. The Gita provides the Indian manager with a concept of motivation and leadership that is not only scientific and thought-provoking but also practical. It suggests that self-motivation is the key to success in economic and industrial development.”

Lalaji paused for breath and then resumed: “These motivational thoughts could help Indian managers achieve not only organizational goals but also social goals. Similarly, the Gita spells out the qualities of a leader as well as the leadership style that would be most productive, emphasizing that only democratic leadership can succeed in achieving organizational goals. It, therefore, asks leaders to be people-centred more than task-centred. Indian management has to achieve the goals of production as well as those of workers. The Gita clarifies that the leader is a servant of the people, and not their master. Thus Lord Krishna decided to serve as the charioteer of Arjuna, and not as a general in the army. Indian managers should take a second look at their managerial practices, policies and leadership style, and shape them according to the principles of motivation and leadership laid down in the Gita. It pleads for a harmonious blending of managerial principles and practices with the social and cultural milieu and ethos of the country and its heritage. I don’t know if modern management teaches anything new.”

I don’t know, either!