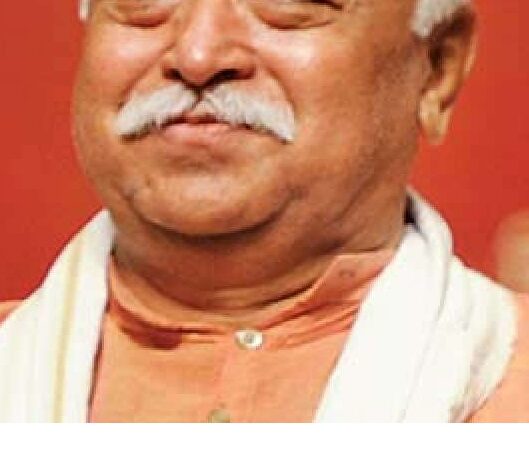 The RSS supremo, Mohan Bhagwat, has been making efforts to narrow the wide gulf between the minority Muslim community and the ruling BJP which has uncharacteristically looked nervous about its prospects in the 2024 Lok Sabha polls. The white mustachioed head of the RSS, fountainhead of the vast Sangh Parivar, the self-proclaimed protectors of the Hindus, has had a meeting with five well-known Muslim members of the civil society and followed it up days later with a visit to a mosque and conversation with the Imam.

It was probably the first time that the top functionary of RSS was visiting mosque. The symbolism of the occasion was not lost on anyone, not when it is commonly believed that it was part of a well-thought-out plan to woo the Muslim voters, a follow up to a much publicized BJP announcement on the ‘Pasmanada’ (backward) Muslims. It is this section among the Muslims who have faced the Hindutva fire.

The meeting with the five ‘Muslim intellectuals’ as well as with an Imam was welcomed by many, even those who are not convinced about the bona fides of the approach of the RSS-BJP combine to break the ice with the Indian Muslims. But a lot many others saw it nothing- with an eye on the 2024 polls- but an effort to deceive the Muslim community who account for 15 per cent of India’s 1.3 billion people and rarely vote for the BJP.

The ‘welcome’ group was drawn from sections who have been critical of BJP/RSS ‘communal’ politics which is dividing the country on religious (Hindu-Muslim) lines. Their argument was that any attempt by the RSS or the BJP to break the ice with the Muslim community must be welcome because talking is better than unending mutual mistrust and hostility.

But the counter argument cannot be overlooked. Much as one may welcome a dialogue between the RSS and some Muslim intellectuals and religious leaders there are reasons that make the exercise look like a sham.

The DNA of the entire Sangh Parivar, led by the RSS and BJP as its political arm, is manifestly ‘anti-Muslim’. Since Narendra Modi became prime minister, Muslims have been subjected to regular attacks, physical as well as verbal, since 2014, creating an atmosphere of fear. There is no hiding the truth that the Hindutva ideology that the RSS and the BJP promote believes in reducing the Muslim to the second class citizenship, denying certain rights and accused of being ‘anti-national’ or links with ‘terror’ groups. The Hindu-Muslim divide in the country has reached alarming levels.

To expect the RSS or the BJP to renounce their anti-Muslim agenda will be self-deception. The huge support base in the majority community of the ruling party which has shaken the secular foundations of the country, will collapse like the house of cards if the BJP and the RSS agree to treat the Muslim as equal citizens, entitled to fair treatment.

The present-day BJP has strongly denounced the word ‘secular’ enshrined in the constitution. The ruling party of the day has gone farther than the Vajpayee-Advani era when ‘secularism’ as practised then was debunked as ‘pseudo-secularism’ but the concept was not rejected altogether.

Those who are not convinced about the success of the initiative taken by Mohan Bhagwat in building trust and mutual respect between the saffron supporters in the majority community and the Muslim and minority are not optimistic on many counts.

There is no indication that the dialogue began by Bhagwat will be a continuous affair. Bhagwat has made some friendly noises about the Indian Muslim community in the past also but that did not stop harassment and lynching of ordinary Muslims. It can only mean that either Bhagwat was merely reading from a script that had no sanctity. Or, it can also mean that though Bhagwat was sincere, the political arm of the RSS—the BJP—decided to ignore him and his advice.

The idea that Bhagwat and his Muslim interlocutors talked about certain issues may be hailed but distrust between the two communities cannot be erased without addressing the issues that agitate the minority community. It has been reported—no official or authorized statement was issued after the meeting—that among the issues discussed were Gyanwapi mosque, the Hijab controversy, cow slaughter and Muslims calling Hindus ‘Kafirs’.

Important as these issues may be what needs to be kept in mind is that if the idea behind the talks between the two sides was to win trust, the talks should have included issues of urgency for the Muslim community, like removing their fears and ways to remove their backwardness. Soliciting the Muslim view on cow slaughter was a wasteful exercise because apart from the law against cow slaughter in some states, there are also several states where the BJP is in power either on its own or with coalition partners where beef is openly sold and eaten.

Bhagwat calling on an Imam if a mosque situated at the roundabout on Kasturba Gandhi Road in the capital invited much adverse comments from the community, not just because he called Bhagwat the ‘Rashtra Pita’ (father of the nation). The cleric is allegedly part of a group that the RSS has cultivated in the Muslim community. Incidentally, the cleric’s brother was in jail over two decades ago following the death of his wife. But the charges against him could not be upheld in the court.

Bhagwat was assisted by a team which consisted of an RSS/BJP leader who heads the minority cell of the BJP. This RSS ‘Pracharak’ from Haryana had often upset the minority community with his vitriolic outpourings. Perhaps that cannot be held against him because in his capacity as in-charge of the minority cell, he is expected to be talking in reconciliatory tones. It is a different question whether the Muslim community believes that his convictions have changed.###