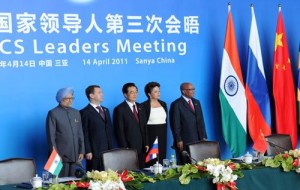 The third BRICS summit of—Brazil, Russia, India, China and South Africa—has issued a communiqué declaring that the international financial crisis had “exposed the inadequacies and deficiencies of the existing international monetary system” and called for reform, based on a “broad-based international reserve currency system providing stability and certainty.”

The summit coincided with the downgrading of S &P’s outlook on US debt to “negative”, which had sent a shudder through global financial markets. The downgrade means there is now a one in three chance that US debt itself will be downgraded over the next two years—an event without precedent. It also means the role of the US dollar as the world’s reserve currency will be severely undermined, if not ended altogether.

The BRICS statement pointed to the contradiction inherent in the dual role of the US dollar—as both a national currency and world money. In order to try to boost the US financial system and cover its trillions of dollars in losses—as well as to strengthen the position of American banks as they battle for global market share—the US Federal Reserve has provided hundreds of billions of dollars in cheap credit through its so-called quantitative easing program.

This has, however, created major problems for other economies. Money has poured into their financial systems, leading to inflation in food and other commodities as well as creating asset bubbles, especially in real estate.

The BRICS communiqué called for “more attention” to be paid to the “risks of massive cross-border capital flows faced by emerging economies” and warned that “excessive volatility” in commodity prices was threatening the global economic recovery. “ We call for further international financial regulatory oversight and reform, strengthening policy coordination and financial regulation and supervision cooperation, and promoting the sound development of global financial markets and banking systems”.

The BRICS group’s call for a new international reserve currency system is not only a response to processes set off by the global financial crisis. It reflects longer-term developments, in particular the shift in the relative positions of the US and the so-called emerging powers within the world economy.

During the first decade of the twenty-first century, the BRICS countries averaged annual economic growth of more than 8 percent compared, to just 2.6 percent for the industrialised countries. The recent announcement that China has displaced the US as the world’s leading manufacturing economy is symptomatic of this shift. The share of the BRICS in the world economy rose from 17.7 percent at the start of the decade to 24.2 percent in 2009, while in terms of additional world growth, the BRICS portion rose from close to zero in 1990 to more than 60 percent last year.

The BRICS’ call for a new international reserve currency recalls the proposal made by British economist John Maynard Keynes in the discussions leading to the Bretton Woods Agreement of 1944. Keynes wanted the financial system to be based on an international currency, “bancor”, not a particular national currency. The United States, however, used its economic dominance to defeat the proposal and the US dollar became world money. The system was anchored in a decision that US dollars would be redeemable for gold at the rate of $35 per ounce.

The new system was not a permanent solution. As world trade expanded and US foreign investment grew, together with overseas military spending, the mass of dollars circulating in international markets far exceeded the gold stocks held by the US. In August 1971, US president Nixon withdrew the gold backing from the US dollar.

For the past 40 years, the international financial system has nevertheless operated with the US dollar acting as world money. It has only been able to do so because of the relative economic superiority of the US over its rivals. But that superiority has now been undermined, and the international financial system is resting on the currency of one of the world’s biggest debtors. –

So, will the importance of the dollar diminish as a trading currency in BRICS economies?

Fielding these questions at the end of Sanya summit, Indian spokesman (Manbir Singh, Secretary, Economic Relations in The Ministry of External Affairs) said ‘As far as the dollar is concerned I have not heard it said by anybody that it is their desire to diminish the value or the importance of the dollar’

He went on to add: ‘Dollar is a reserve currency and most of the BRICS countries are holding large amounts of reserves in dollars at present apart from other currencies as well. So, trying to facilitate trade in their own currencies should not be construed as being something that would work against the value of the dollar. But at the same time you should look at what is happening in the international world today. The reserve currency dollar has necessitated for the USA to continue to have a deficit for a long time and this deficit continues. And there is now a strong public pressure within the US Government that this deficit should be brought to a stop or curtailed. And how will you curtail the deficit without actually stringing in the reserve currency? So, these are all things that are happening and in the background people are talking that this reserve currency is fluctuating, then we must have another reserve currency which may not be a substitute but is an alternative.

‘Substitute would mean that you replace one by the other. But the alternative means they have a choice – you have dollar, you have SDRs. But what was felt today was that these are issues which are complex issues on which there should be studies and there should be detailed recommendations because you cannot go without studying what are the implications. You do not want to do something as a palliative to a certain issue and then find that on a score of other issues you are sorry. So, the decision that they are taking is that let us explore SDRs. SDRs have been a reserve currency since a very long time but it is not being expanded. So, let us see what can be done with the SDRs.

‘We are not seeing SDRs as international reserve currency, but we are now talking about expanding the SDRs. You cannot expand the SDRs to double the amount they are in a year or two years. It will have to be over a period of five years or six years. But what are the implications, how can it be done, what would be the contribution of all the economic powers in the strengthening of the SDRs and expanding, these studies need to be done. This is what everybody wanted’