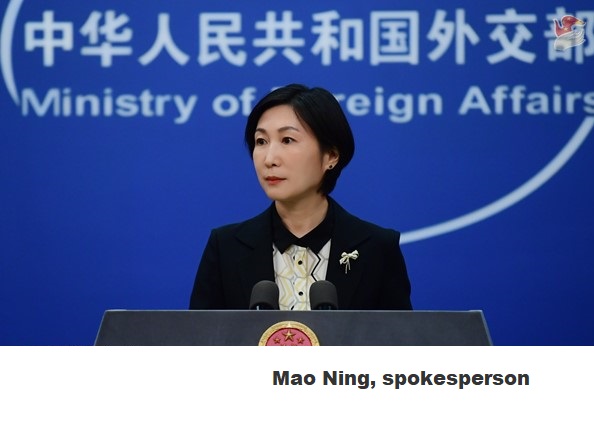 CCTV: President Xi Jinping made a state visit to Kazakhstan yesterday. Can you share more information on the visit?

President Xi’s visit is highly productive and fruitful. The two heads of state signed and issued the Joint Statement Between the People’s Republic of China and the Republic of Kazakhstan on the 30th Anniversary of the Establishment of Diplomatic Relations, and announced that China and Kazakhstan will work for the goal and vision of building a community with a shared future defined by lasting friendship, a high degree of mutual trust and sharing weal and woe. Relevant departments of the two sides signed bilateral cooperation documents in such areas as economy and trade, connectivity, finance, water conservancy and the media. The two sides also?decided to set up consulates general in Xi’an and Aktobe respectively.

Going forward, the two sides will continue to support each other on issues concerning each other’s core interests such as sovereignty, security and territorial integrity. The Kazakh side said it will continue to firmly support the one-China principle and oppose all forms of “Taiwan independence”.?

The two sides will fully leverage the important role of head-of-state diplomacy in providing strategic guidance and have regular strategic communication on major issues of common interest.?

The two sides will advance high-quality Belt and Road cooperation, and seek synergy between the Belt and Road Initiative and Kazakhstan’s new economic policy of the “Bright Road” Initiative.?

The two sides will actively follow the new vision of common, comprehensive, cooperative and sustainable security, jointly combat terrorism, separatism and extremism, and uphold political security and the security of political authority.?

The two sides will firmly abide by the UN Charter and principles of international law, practice true multilateralism, expand cooperation under such multilateral frameworks as the UN and the SCO, implement the Global Development Initiative and Global Security Initiative, jointly build a community with a shared future for mankind, and make our share of contribution to fostering a more equitable and reasonable global governance system.?

China is ready to work with Kazakhstan to follow the guidance of the important common understanding reached by the two Presidents during this visit, follow the spirit of mutual respect, good neighborliness, friendship, mutual assistance, mutual benefit and win-win outcomes, and move the China-Kazakhstan relationship into the next 30 golden years.?

The Paper: It is reported that on September 14 local time, the US Senate Foreign Relations Committee approved the Taiwan Policy Act of 2022, which now heads to the Senate floor. Do you have any comment?

Mao Ning: The bill seriously breaches the US’s commitment to China on the Taiwan question, and violates the one-China principle and the three China-US joint communiqués. It constitutes an interference in China’s internal affairs, violates international law and basic norms in international relations, and sends a seriously wrong signal to the “Taiwan independence” separatist forces. China is firmly opposed to this and has lodged serious démarches with the US side.?

There is only one China in the world and Taiwan is an inalienable part of China’s territory. China will unswervingly advance the complete reunification of the country. No country, no force and no individual should ever misestimate the firm resolve, strong will and great capability of the Chinese Government and people to defend state sovereignty and territorial integrity and to achieve national reunification and rejuvenation.

We strongly urge the US to abide by the one-China principle and the three China-US joint communiqués, earnestly act on the commitment made by the US leadership of not supporting “Taiwan independence”, stop playing the “Taiwan card” and using Taiwan to contain China, and stop advancing the deliberation of the relevant bill. China will take all necessary measures in light of the bill’s process and final outcome to firmly safeguard our sovereignty and territorial integrity.?

Shenzhen TV: The US government announced on September 14 that the $3.5 billion of Afghan central bank reserves it had frozen will be transferred to a newly-established “Afghan Fund” in Switzerland. Wally Adeyemo, Deputy Secretary of the Treasury, said no money would go to the Afghan central bank, until it is “free of political interference”. What’s China’s comment??

AFP: The Iranian government said the other day that it is working to join the Shanghai Cooperation Organization (SCO). What is China’s take on this?

Mao Ning: The appeal and influence of the SCO have kept growing. China looks forward to having discussions and reaching consensus on the organization’s expansion during the SCO summit. Any update on this will be released on a timely basis. Please stay tuned.?

China News Service: It is reported that on September 14, China and Pacific Island Countries (PICs) held a dialogue and exchange meeting on climate change in Beijing. Could you give us more details on the meeting?

Mao Ning: Yesterday, China’s special envoy on climate change Xie Zhenhua, together with diplomatic envoys from Tonga, Fiji, the Federated States of Micronesia, Solomon Islands, Kiribati, Samoa and Vanuatu, held the China-Pacific Island Countries climate change dialogue and exchange meeting. Participants had an in-depth exchange of views on policies and actions to address climate change, expected outcomes of the 27th session of the Conference of the Parties to the United?Nations?Framework?Convention on Climate Change, and South-South cooperation on climate change. The meeting has produced positive outcomes. It deepened the parties’ understanding of each other’s strategies, plans, efforts and policies on climate change, and achieved the goal of enhancing mutual trust and promoting cooperation. The envoys from the participating PICs highly appreciated China’s climate actions and the results, and thanked China for providing valuable support to PICs’ efforts in this regard. They expressed the readiness to further strengthen dialogue and consultation with China and jointly make positive contributions to the multilateral climate process.?

As a responsible major country, China takes very seriously the special difficulties and concerns of PICs in addressing climate change. Over the years, China has provided PICs with material assistance and capacity-building training and other support to enhance their capacity to cope with climate change. China is ready to stay in close communication and cooperation with the PICs. We hope to help PICs better address climate change and achieve sustainable development through bilateral channels and South-South cooperation, including by making full use of the China-Pacific Island Countries Climate Change Cooperation Center and other platforms. This is also part of the joint effort to build a China-PICs community with a shared future.?

Bloomberg: The European Union is proposing a forced labor product bans act. So this proposal, while it doesn’t single out China, it does mean that the EU would be able to withdraw or ban any product that was found to have used forced labor at any stage of production. So this is something that could potentially impact Xinjiang-made goods in the future. My question is, does the foreign ministry have any comment on the European Union’s proposed forced labor product ban?

Mao Ning: The Chinese government follows a people-centered development philosophy and attaches great importance to protecting the rights and interests of workers. We protect the equal right of workers from all ethnic groups to seek employment, to participate in economic and social life, and to share the dividends of socioeconomic progress. In recent years, Xinjiang has enjoyed sustained economic development, social harmony and stability, continuous improvement of people’s livelihood, unprecedented cultural prosperity and religious harmony. There’s no so-called “forced labor” in China. We firmly oppose using the so-called “forced labor” or any Xinjiang-related issue to interfere in China’s internal affairs. ###