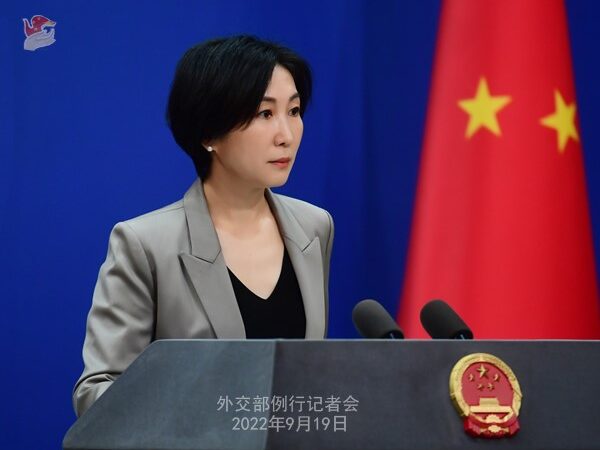 (The order of questions was tweaked to bring upfront  questions related to terrorism and monkeypox) .

Prasar Bharati: China, last week, for the third time in the last three months blocked a proposal at the United Nations to blacklist a Pakistan-based top Lashkar-e-Taiba (LeT) terrorist Sajid Mir, who was involved in the 2008 Mumbai attacks and attacks in the US and Denmark. Why did China do this and can you give any reason? What message does China want to give to the world regarding anti-terrorism as a permanent member of the UNSC??

Mao Ning: I believe you were referring to the designation issue at the 1267 Committee of the UN Security Council. The committee has clear guidelines regarding the designation of terrorist organizations and individuals and related procedures. China always takes part in the work of the committee in a constructive and responsible manner in strict accordance with the rules and procedures.?

Follow-up: As per the procedures you and your colleagues have mentioned in the past three months, is there any timeline that China will withdraw its blockage and remove its opposition to the listing?

Mao Ning: China’s actions at the 1267 Committee are always consistent with relevant rules and procedures. We will continue to conduct our work in a constructive and responsible manner

Bloomberg: A top Chinese health official warned people against having skin-to-skin contact with foreigners to avoid contracting Monkeypox. Is that the official stance of the Chinese government? And has the foreign ministry ordered its employees in China and abroad to stop touching foreigners?

Mao Ning: This is not a question about diplomacy and I would refer you to competent authorities.

Reuters: Mr. Wu Zunyou warned against having skin-to-skin contact with foreigners. Does the foreign ministry agree with such health awareness??

Mao Ning: This is a question about science and public health. I would refer you to competent authorities.

CCTV: Last Friday, President Xi Jinping wrapped up his?trip to Central Asia, which has received?international attention. During the trip, he attended the Samarkand Summit of the Shanghai Cooperation Organization (SCO) and paid state visits to Kazakhstan and Uzbekistan. International commentary has described the trip as one of major strategic significance. How does China see its outcomes and significance?

Mao Ning: President Xi Jinping’s trip to Central Asia is an?important landmark visit undertaken at a crucial and historic juncture. As the trip came to an end, State Councilor and Foreign Minister Wang Yi gave a detailed briefing. Within a 48-hour stay in the two Central Asian countries, President Xi attended nearly 30 multilateral and bilateral events. The visit has had many highlights and created fruitful outcomes. With its facilitation, the SCO has entered a new phase of development. The visit also successfully steered China’s relations with relevant countries to new levels.?

President Xi Jinping delivered an important speech at the Samarkand Summit, where he put forward major initiatives and proposals on greater unity among the member states and the future development of the SCO. He emphasized the need to enhance mutual support, expand security cooperation, deepen practical cooperation, enhance people-to-people and cultural exchanges, and uphold multilateralism. The Chinese side also announced that it is ready to establish a China-SCO base for training counter-terrorism personnel, host a forum on industrial and supply chains, set up a China-SCO Big Data Cooperation Center, and provide developing countries in need with emergency humanitarian assistance of grain and other supplies worth 1.5 billion yuan. These proposals and initiatives of China have received a positive response from other countries. The Samarkand Summit set a new record in three aspects. First, it adopted 44 outcome documents, the highest number recorded. Second, it saw the broadest participation, with the attendance of leaders of 14 countries including SCO member states, observer states and the Presidency’s guests, and heads of nine international organizations and institutions such as the UN. Third, it marked the largest round of expansion for the SCO, as a?memorandum of obligations on Iran’s membership was signed,?the procedure for?Belarus’s accession?was started, the status of SCO dialogue partners was granted to Egypt, Saudi Arabia and Qatar, and agreement was reached on admitting Bahrain, the Maldives,?the UAE, Kuwait, and Myanmar as new dialogue partners.

During President Xi Jinping’s fruitful state visits to Kazakhstan and Uzbekistan, a wide-ranging consensus was reached on the future direction and priorities of cooperation, writing a new chapter of good-neighbourly friendship between China and the two countries. The launch of the concept of a community with a shared future between China and Kazakhstan and between China and Uzbekistan at the bilateral level is an integral part of the building of a community with a shared future for mankind. It will better benefit the people of the three countries and contribute to regional peace and development.

President Xi Jinping also held bilateral meetings in Samarkand with the?leaders of 10 countries attending the SCO Summit at their request and attended the trilateral meeting between China, Russia and Mongolia to deepen strategic communication with all parties. The meetings covered many topics, reached significant depth and produced substantive results, which play an important role in guiding?the growth of bilateral relations and inject positive energy into the peaceful development of the Eurasian continent.

Throughout this visit, we can strongly feel the international community’s firm support for China and eager expectation for deepening friendship and cooperation with China. Under the leadership of President Xi Jinping, China has been a constructive force in international relations. We will continue to promote dialogue and cooperation, advance unity and openness, safeguard peace and development, and play an increasingly important role for the long-term stability and sustainable development of the Eurasian continent and the world at large.

Shenzhen TV: The 19th China-ASEAN Expo and China-ASEAN Business and Investment Summit were held recently in Nanning, Guangxi. The expo has served as a traditional platform for China-ASEAN economic and trade cooperation since 2004. Can you talk about the special significance and outcomes of this expo?

Mao Ning: This year marks the establishment of the China-ASEAN comprehensive strategic partnership and the entry into force and the start of the implementation of the Regional Comprehensive Economic Partnership (RCEP). Under the theme of “Sharing RCEP New Opportunities, Building a Version 3.0 China-ASEAN Free Trade Area”, this year’s China-ASEAN Expo saw 40 investment promotion activities with 1,653 enterprises participating in offline events and more than 2,000 enterprises participating in online events. A total of 267 cooperation projects were inked with a record high investment of 413 billion yuan, up by 37% from the previous expo.?

Han Zheng, Member of the Standing Committee of the Political Bureau of the CPC Central Committee and Vice Premier of the State Council, attended the opening ceremony of the expo and delivered a keynote speech. Leaders of seven ASEAN countries including Malaysian Prime Minister Dato’ Sri Ismail Sabri bin Yaakob, Cambodian Prime Minister Hun Sen, and Philippine President Ferdinand Romualdez Marcos, and the ASEAN Secretary-General, among others, addressed the event virtually. All sides agreed on the need for high-quality implementation of RCEP, building a version 3.0 China-ASEAN Free Trade Area, and deeper integration of industrial, supply and value chains.

The Paper: According to Japanese media reports, Tokyo Electric Power Company (TEPCO) said in a recent statement that an analysis of the sampled ALPS treated nuclear-contaminated water from the Fukushima nuclear power plant showed that the activity concentration of Sr-90 in the sample was about three times that of Japan’s national standard. What is China’s comment?

Mao Ning: This fully shows that the international community’s concerns over the reliability of Japan’s data, the effectiveness of the purification equipment and the uncertainties about the environmental impact are entirely justified. Despite all the doubts over Japan’s plan to discharge the nuclear-contaminated water into the sea and the fact that the international community’s legitimate concerns have not yet been properly addressed, Japan has pushed ahead with the discharge plan and the construction of the discharge pipeline. This is extremely irresponsible.?

The ocean is not Japan’s waste dump; and the Pacific Ocean is not Japan’s sewer. China again urges Japan to stop pushing through the plan to discharge the water into the ocean, take seriously the legitimate concerns of all countries, earnestly fulfill its due international obligations, have a full consultation with relevant international organizations and stakeholders including its neighbors, and find a proper way to dispose of the nuclear-contaminated water in a science-based, open, transparent and safe manner.

Reuters: The Taiwanese representative to the UK has been given a special invitation to sign the condolence book for the Queen. Is the Chinese foreign ministry OK with this?