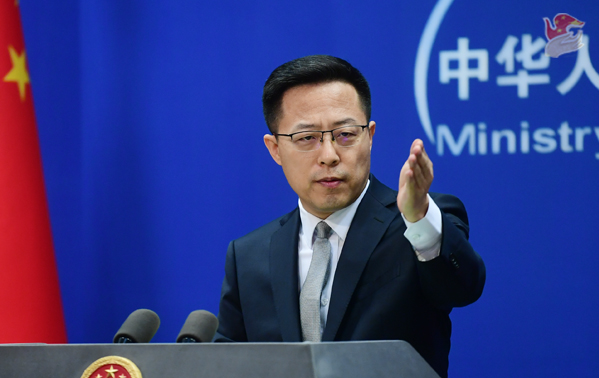 CCTV: China was the rotating president of the UN Security Council for August. How do you assess China’s work in this role?

Zhao Lijian: China has successfully completed its work as the rotating president of the UN Security Council for August. Ambassador Zhang Jun, China’s Permanent Representative to the UN, has shared the work we have done with member states and the media. China assumed the rotating presidency just ahead of the 77th session of the UN General Assembly. China placed high importance on this role. China fulfilled its duties responsibly and constructively and achieved positive results.

During the past month, China, as the rotating president, encouraged all sides to uphold the spirit of dialogue and cooperation, follow the vision of common, comprehensive and sustainable security, and jointly foster a balanced, effective and sustainable security architecture to safeguard security for all. We called for great focus on capacity-building in Africa and efforts to promote lasting peace and development in Africa in the course of implementing the Global Security Initiative, the Global Development Initiative and the outcomes of the Forum on China-Africa Cooperation. China worked together with other Council members to promote dialogue and reconciliation, create enabling conditions for the political settlement of hotspot issues, and promptly handle sudden incidents. We have fulfilled our mandate to safeguard world peace and security and responded to the international community’s expectations. The way we carried out the presidency was open and inclusive. Our work was pragmatic and efficient. It helped strengthen solidarity and cooperation within the Council, which has been commended by various parties.

We will continue to uphold true multilateralism and work together with all Council members and member states to safeguard common security, promote common development, and strive to build a community with a shared future for mankind.

Reuters: During a news conference on Friday, Japanese Finance Minister Shunichi Suzuki urged all countries that lent money to Sri Lanka, including China, to discuss the country’s debt restructuring. These were remarks made after Sri Lanka reached a loan agreement with the International Monetary Fund. As a creditor nation, does China have any comment?

Zhao Lijian: China has paid close attention to the difficulties and challenges faced by Sri Lanka and we have provided help to Sri Lanka’s socio-economic development to the best of its capacity. China supports relevant financial institutions in consulting with Sri Lanka for proper solutions. We are ready to work with relevant countries and international financial institutions to continue to play a positive role in supporting Sri Lanka’s response to current difficulties and efforts to ease debt burden and realize sustainable development.?

Beijing Youth Daily: The 2022 China International Fair for Trade in Services (CIFTIS) is being held in Beijing. What’s the significance of hosting this fair against the backdrop of the COVID-19 pandemic and mounting downward pressure in the global economy?

Zhao Lijian: The 2022 CIFTIS opened on August 31 in Beijing and will run through September 5. The theme of the 2022 CIFTIS is “cooperate for better development, innovate for a greener future”. As of September 1, 72 countries and international organizations have set up booths to participate in the fair, of which ten are setting up national booths for the first time. Besides, over 2,400 companies participate in the exhibition offline,?including Global Fortune 500 companies and industry-leading enterprises. Going forward, more activities will be held under the 2022 CIFTIS to facilitate in-depth discussions on a path of global cooperation for green development, including comprehensive exhibitions, thematic exhibitions, summit forums, thematic forums, and promotional business talks.

The CIFTIS has become a comprehensive fair of the largest scale in the trade in services sector and serves as a platform for countries to have services trade and investment cooperation with China. China is ready to work with all parties to follow the vision of a community with a shared future for mankind, implement the Global Development Initiative, promote the sound and sustainable development of services trade, foster world-class business environment for companies investing and operating in China and make bigger contributions to the world economic recovery.

CNR: Recently, many European countries have faced energy shortages due to sanctions against Russia and have to import natural gas from the US across the ocean at high prices. Some European media have commented that the US is posing as the saviour while making huge profits by selling gas to European countries. What is your comment??

Zhao Lijian: Those comments made a very good point. Half a year on since the Ukraine crisis fully escalated, it’s been proven once again that US and other Western unilateral sanctions do not solve the problem. Moreover, these sanctions have spilled over and backfired, generating an impact that has kept snowballing and spreading.

I noticed reports saying that the prices of natural gas in Europe are more than 10 times their level in the US, a record-breaking gap. US companies are making more than $100 million on every liquefied natural gas shipment to Europe, according to figures disclosed by Business Insider. Apparently, just like the arms and grains dealers, energy traders in the US are certainly not going to miss this opportunity to turn the crisis into a gold mine, as they make exorbitant profits off the US’s allies. Meanwhile, ordinary Europeans are paying the price – soaring electricity bills, lower heating temperatures and even organized blackouts. No wonder George Galloway, a former British MP, said that the US “is ready to fight to the last drop of Ukrainian blood, in the end, it’s prepared to fight to the last drop of European blood”.?

The US created the Ukraine crisis in the first place, but has now become the biggest winner sitting across the ocean and profiting from the crisis. This calls for reflection and vigilance.

Xinhua News Agency: It is reported that Iran sent its reply to the EU coordinator on September 1 to give its latest response to the “final text” on resuming compliance with the JCPOA. Do you have any comment?

Zhao Lijian: We are looking closely at Iran’s latest reply. It seems that the reply is in line with Iran’s consistent position on relevant issues. We hope all parties, the US in particular, can actively respond to Iran’s legitimate concerns so that agreement will be reached at an early date. China will continue to make positive efforts toward this end.

CRI: Based on information released by the DPRK, the DPRK side concluded that balloons floated over the border from the ROK is a route of the coronavirus inroads into the country and said it will take measures in response. An official of the DPRK’s research institute for national unification said yesterday that the US-ROK Ulchi Freedom Shield military exercise is an extremely provocative and dangerous nuclear war game against the DPRK and the situation on the Korean Peninsula is reminiscent of the eve of war. Do you have any comment?

In 2018, the DPRK and the ROK reached common ground on a number of important measures such as the proper handling of balloons and joint military exercises. After that, the situation on the Peninsula took a major turn for the better, which was widely welcomed by countries in the region and the international community. Regrettably, the situation on the Peninsula later reached an impasse. China believes that dialogue and consultation is the only right and effective way to resolve the Peninsula issue. Improving and developing relations and promoting reconciliation and cooperation between North and South has an irreplaceable role in easing tensions on the Peninsula and pushing forward the process of political settlement of the Peninsula issue. The DPRK’s concerns over the balloons and military exercises should be taken seriously. China calls on all parties to show goodwill, meet each other halfway, jointly prevent escalation of the situation and make positive efforts for an early resumption of dialogue and peace talks.

Zhao Lijian: The Chinese side made clear our solemn position on the OHCHR assessment on Xinjiang yesterday. It is a patchwork of disinformation politically driven by the US and some Western forces and is completely illegal, null and void.

A handful of Western countries easily gave themselves away when they rushed to hype up this assessment the moment it was released. There’s a Chinese idiom for that which describes it as a voluntary confession without even being coerced. This once again exposes their pernicious aim of using lies on Xinjiang to contain China. It tells us who are the ones behind this false assessment. This is also evidence that the OHCHR assessment is predicated on the political scheme of some overseas anti-China forces. And the OHCHR has become an enforcer and accomplice of the US and some Western forces in bullying the developing countries.?

What the OHCHR really needs to focus on is the human rights violations involving the US and some Western forces: physical and cultural genocide of Native Americans, human trafficking from overseas for modern-day slavery and forced labor, systemic racial discrimination against minorities, deadly gun violence, serious regression of women’s rights, torture and abuse in overseas black sites, unilateral sanctions that jeopardize human rights in other countries, killings of civilians in overseas military operations and so on. Foreign Ministry spokespersons have mentioned these violations several times. We ask the OHCHR to shed light on these violations, pursue accountability and release assessments. This is the responsible thing to do for the international community and the victims of these violations.

As part of the UN Secretariat, the OHCHR must follow and uphold the purposes and principles of the UN Charter, defend the sovereignty of member states, and refrain from interfering in their internal affairs. With the manipulation of the US and other Western forces, the so-called assessment of the OHCHR runs counter to these principles. UN member states should seriously hold it accountable. China will continue to steadfastly pursue human rights development with Chinese characteristics, and contribute more to the advancement of human rights in China and the whole world.