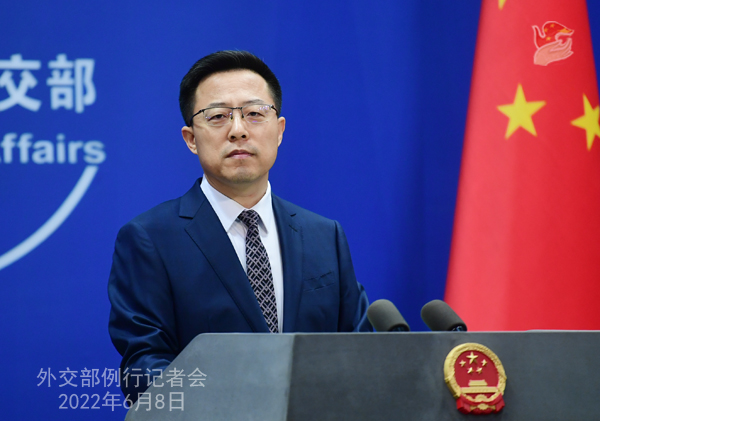 Zhao Lijian: As traditional friendly neighbours, China pays close attention to and feels for the difficulties and challenges facing Sri Lanka. We have all along provided support to Sri Lanka’s socioeconomic development as long as our ability permits. China has announced that it would provide emergency humanitarian assistance worth 500 million RMB for Sri Lanka. The first delivery of medicine has arrived in Sri Lanka, and the first shipment of rice has left China for Sri Lanka. Through government-to-government and subnational channels and through friendly organizations, China has provided multiple batches of assistance in diverse forms to people across the sectors of Sri Lanka to improve their livelihood.

As to China-Sri Lanka financial cooperation, shortly after the Sri Lankan government announced to suspend international debt payments, Chinese financial institutions reached out to the Sri Lankan side and expressed their readiness to find a proper way to handle the matured debts related to China and help Sri Lanka to overcome the current difficulties. We hope Sri Lanka will work actively with China in a similar spirit and work out a feasible solution expeditiously. China is ready to work with relevant countries and international financial institutions to continue to play a positive role in supporting Sri Lanka’s response to current difficulties and efforts to ease debt burden and realize sustainable development. In the meantime, we believe Sri Lanka will boost its own effort, protect the legitimate?rights?and?interests?of the investment and financing partners and ensure the stability and credibility of Sri Lanka’s investment and financing environment.

South Asian countries, along with the other countries in our neighboring areas, are China’s priority in its diplomacy. China attaches great importance to forging closer good neighbourly relations with its neighbours and has worked hard to this end. China and South Asian countries are each other’s friendly neighbours and development partners. Together we belong to one community with a shared future. From natural disasters like earthquakes and tsunamis, to global challenges like financial crises and COVID-19, history has shown that China has always stood in solidarity with South Asian countries through difficult times. Under the current circumstances, China will work with relevant countries to respond to risks and challenges and pursue high-quality Belt and Road cooperation to jointly sustain the sound momentum of security, stability, cooperation and development in our region and bring great benefits for all peoples in this region.

TASS: According to reports, during State Councilor and Foreign Minister Wang Yi’s visit to Central Asia, a series of cooperation agreements have been signed between China and the regional countries. Does this mean cooperation between China and the Central Asian countries has entered a new historic stage? Also, US Deputy Secretary of State Wendy Sherman reportedly said on June 7 that there would be a strong and clear response from the US, the ROK and the world if the DPRK were to conduct a nuclear test. Do you have any comment??

Zhao Lijian: On your first question, our delegation will release information on State Councilor?and?Foreign?Minister Wang’s visit in due course. You may stay tuned.

On your second question, China?always?believes?that,?to maintain peace and stability on the Korean Peninsula and achieve denuclearization on the Peninsula is in the shared interest of all parties and the international community. We hope all parties concerned will stay calm, exercise restraint, work in the same direction, refrain from moves or rhetoric that may be perceived as provocative and jointly advance the process of political settlement of the issues on the Korean Peninsula.?.

CNR: It is reported that US Trade Representative Katherine Tai said on June 6 that the US is 85 percent reliant on China as a producer of solar panels and the supply chain runs right through Xinjiang where there’s a significant “forced labor” problem. Do you have any comment?

Zhao Lijian: As the Chinese side has stressed many times, the allegation of “forced labor” in Xinjiang is nothing but a lie of the century. “Forced labor” in Xinjiang is a lie deliberately made up and spread by the US to shut China out of the global supply and industrial chains. China is the world’s largest photovoltaic (PV) manufacturer and has more installed capacity than anyone else. Xinjiang is the world’s most important production base of polysilicon, an essential material of the PV industry. By fabricating the lie of “forced labor” in Xinjiang, the US aims to achieve its sinister goal of suppressing the competitive edge of Xinjiang’s PV industry and relocate it out of China through political manipulation.?

What the US did will hamstring normal trade of PV products, disrupt the supply chains and undermine the global response to climate change. In the end, this will also backfire and hurt the US’s own interests. China will take all necessary measures as always to resolutely safeguard the lawful rights and interests of Chinese companies.?

PTI: Further to what you said about Sri Lanka and the President’s interview regarding the declining interests of China in South Asia. If I remember right, the Chinese ambassador to Colombo has earlier said that China was considering a line of credit to Colombo. It appears that has not materialized so far,? though China went about with some relief and medical supplies. My question is, is China concerned about the kind of economic crisis being faced by several South Asian countries? Not Sri Lanka alone, that includes Pakistan as well, are seeking bailout packages, especially from the IMF. Is China, a major investor in these countries, hesitating to provide huge assistance??

Zhao Lijian:? I just elaborated China’s position on the situation in Sri Lanka, including financial cooperation between China and Sri Lanka and cooperation between China and South Asian countries. We have noted and followed closely the financial, fiscal and international balance of payment difficulties facing the South Asian countries and other developing countries as you mentioned. These difficulties partly stem from the challenges brought by the COVID-19 pandemic. They also have a lot to do with the Russia-Ukraine conflict and the unilateral sanctions slapped by the US and other Western countries on Russia in the wake of the conflict. Those sanctions aggravated the food and?energy?crises in developing countries and inflicted even more hardships on the people.?

Just now I outlined some of China’s efforts to help Sri Lanka. We have taken note that the Indian government has also done a lot in this regard. We commend those efforts. China is ready to work with India and the rest of the international community to help Sri Lanka and other developing countries experiencing difficulty to pull through the hardship as early as possible. I assume you have also noticed the recent?shipment and arrival of medicine, rice and other supplies donated by the?Chinese?side,?including provinces and cities, to Sri Lanka. The Chinese government will do its utmost and make full use of the channels available to deliver help to the Sri Lankan society.? ?