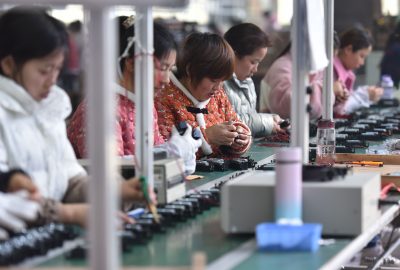 Marriages in China have plunged to their lowest levels on record in an alarming sign of the deepening population crisis facing the world’s second-largest economy.

Official data revealed that marriage registrations slumped 6.1 per cent to 7.6 million in China last year amid warnings that the economic consequences of an ageing population are beginning to emerge.

It is the fewest marriages since public records began in 1986 and the rate has almost halved in the last decade to 5.4 marriages per 1000 people.

Almost half of those getting married were aged above 30 as people are forced to delay plans to start a family.

China’s brewing demographics crisis will have far-reaching consequences, from economic growth to the housing market, with the central bank warning that its population could peak this year.

Joanna Davies, head of China economics at Fathom Consulting, said China’s “demographic dividend is over”, warning population shifts “will soon act as a constraint on, rather than a driver of, its growth”.

She said China’s deteriorating demographics can be explained by the one-child policy, some of the highest childcare costs in the world and net outward migration.

Mark Williams, chief Asia economist at Capital Economics, said: “There are challenges with pensions and funding care for the older population as the number of workers shrinks. And China’s demographic decline will make a difference to its global standing. It’s a huge market that companies and governments want to court.”

He said the demographic shift will also have an impact on its property market which generates a fifth of GDP and is in crisis after problems emerged at its indebted developers.

Williams warned the property market is facing “substantial falls in demand over the next decade in part because there are fewer young people looking to buy houses”, a major reason why many of the developers “are in trouble”.

For decades China tried to keep a cap on its fast-expanding population with the one-child policy. However, the country is now being hit by a rapidly ageing population and is attempting to boost its birth rate again. China is expected to be soon overtaken by India as the world’s most populous country.

“The abundance of Chinese labour has been key to its emergence as a global manufacturing powerhouse,” Davies said.

“Birth rates are declining in most major economies, but the fall is particularly striking in China. How much of this is due to the one-child policy is unclear, as the trend appears to have begun some time before the policy was introduced.”

Experts also believe that the rapid modernisation of China has also dragged down rates as more women pursue financial freedom over marriage.