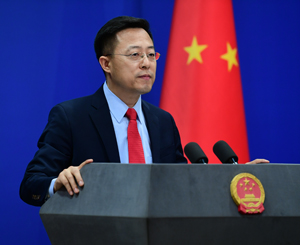 CGTN: According to a poll conducted recently by CGTN’s think tank among people in 24 countries, nearly 80% respondents in Afghanistan believe the US war against their country was a “complete failure”. Do you have any comment?

Zhao Lijian: I noted the poll you mentioned. It is very telling as it reflects how the Afghan people and the international community truly feel about the two-decade-long war in Afghanistan. The war launched by the US has left a lingering nightmare on the Afghan people. The US’s selective counter-terrorism campaign has only made terrorism worse in Afghanistan, which now has more terrorist groups than before the war. Let me just cite some numbers from the poll:

Among the Afghan respondents, 78.2% said overthrowing the government of a sovereign state in the name of fighting terrorism is “completely wrong”. Among global respondents, 80.4% said when US troops left Afghanistan, the causes of local terrorism still exist. The US promised to “build a stable, strong and prosperous Afghanistan”, yet only 8.9% of Afghans surveyed believed the US has kept its promise. As to the US freeze of $7 billion worth of assets belonging to the Afghan central bank, 74.1% Afghan respondents said this is “purely looting”.?

Today marks one year since the US troops completed the withdrawal from Afghanistan. One year on, the gaping wounds torn open by the US through force and plunder are still bleeding. Instead of reflecting on its responsibilities, the US continues to hamper Afghanistan’s reconstruction. According to recent figures from the UN Office for the Coordination of Humanitarian Affairs,?25 million Afghans are living in poverty and 3 million Afghan children are unable to return to school. According to a report released by the United Nations Assistance Mission in Afghanistan, the human rights situation has been exacerbated by a nationwide economic, financial and humanitarian crisis of unprecedented scale. At least 59% of the population is in need of humanitarian assistance by June 15, 2022 – an increase of 6 million people compared with the beginning of 2021. The US must answer for this.?

The US needs to respond to the strong voice of the Afghan people and the international community, immediately return the assets of the Afghan central bank, take real action to heal Afghan people’s wounds, and show accountability to the world.

Zhao Lijian: Since Pakistan was hit by the floods, our thoughts have been with the people in the affected areas. We feel deeply for the Pakistani side in this difficult time. President Xi Jinping sent a message of sympathy to President Arif Alvi over the severe floods. Premier Li Keqiang sent a message of sympathy to Prime Minister Shehbaz Sharif. Earlier, State Councilor and Foreign Minister Wang Yi expressed sympathy to Foreign Minister Bilawal Bhutto Zardari upon learning the news of the floods. This morning, China’s air force urgently?dispatched Y-20 cargo?planes to deliver humanitarian supplies to Pakistan, including 3,000 tents. The shipments are expected to reach the Karachi Airport this afternoon at 4 pm Beijing time.

As all-weather strategic cooperative partners and iron-clad friends, China and Pakistan have long stood shoulder to shoulder in responding to natural disasters and other major challenges. China has immediately responded to the floods in Pakistan and will continue to provide urgently-needed help to Pakistan and support it in its disaster relief work. We believe that with the concerted efforts of the Pakistani government and people, the affected people will surely overcome the disaster and rebuild their homes soon.

Phoenix TV: US White House official John Kirby said that China is trying to introduce a “new normal” in the Taiwan Strait with military activities to escalate the situation, and that the US will not accept this. We also noticed that the White House Press Secretary said that in response to Chinese provocative moves, the US will conduct military exercises in the future with a view toward guiding the situation in western Pacific toward greater stability. And this is not about US-China relations. What is your comment?

Zhao Lijian: It is the US and Taiwan separatist forces, not China, that seeks to change the status quo across the Taiwan Strait. There is only one China in the world. Taiwan is part of China. The Government of the People’s Republic of China is the sole legal government representing the whole of China. The “Taiwan independence” forces’ attempt to solicit foreign support including from the US to advance their agenda is the source of the current tensions in the Taiwan Strait.

The US, under the pretext of stability in the West Pacific, blatantly tries to use Taiwan contain China. How is this not about China or China-US relations? If the US truly wants to guide the situation toward greater stability, it should immediately return to the one-China principle and the three China-US joint communiqués and avoid sending any more wrong signal to “Taiwan independence” separatist forces.

Reuters: Guatemalan Foreign Minister Mario Bucaro said today that “Guatemala will always support Taiwan because we firmly believe in the principles of peace, sovereignty and territorial integrity.” This is said in Taipei when Mario Bucaro was meeting with Tsai Ing-wen. Does the foreign ministry have any comment on this statement?

Zhao Lijian: The one-China principle is a widely accepted norm in international relations and a common understanding of the international community. The DPP authorities are seeking political manipulation by using certain countries having what they call “diplomatic ties” with Taiwan. This deceptive gambit will not work. Nor will it hold back the inevitability of China’s reunification. In the meantime, we urge Guatemala to refrain from emboldening the DPP authorities, get a clear understanding of the overwhelming trend in the international community as soon as possible and make a decision that is in keeping with the historic trend at an early date.?

Zhao Lijian: China expresses its concern over the recent deadly armed clashes in the Libyan capital Tripoli. We call on relevant sides in Libya to exercise restraint, refrain from any action that could escalate tensions, and resolve differences through dialogue and negotiation. We stand ready to work together with the international community and continue to play a positive role in the restoration of peace and stability in Libya.

CCTV: It is reported that on August 29, Syria’s Ministry of Foreign Affairs and Expatriates clarified in letters to the Secretary-General of the United Nations and the President of the Security Council that the US’s illegal military presence, terrorist groups and the US-backed opposition armed group Syrian Democratic Forces have conducted illegal activities such as stealing and destruction from the start of the Syrian war in 2011 to June 2022. The total estimated value of the losses of the oil, gas and mineral wealth sector in Syria is as high as 107.1 billion dollars. Do you have any comment??

Zhao Lijian: I have noted relevant reports. It is appalling to see the sheer scale of US plundering in Syria, which has been going on as the country tries to emerge from a crisis that has dragged on for over a decade and a grave humanitarian crisis facing its people. There is no greater injustice than the world’s wealthiest country robbing one of the poorest.?

The US intervened in the Syrian crisis trying to start a “colour revolution”. Its frequent military interventions in Syria have caused great civilian casualties and inestimable economic loss, and displaced more than 12 million people. Just last week, the US military launched another round of airstrikes in eastern Syria in a string of violations against Syria’s sovereignty and territorial integrity. On top of all that, the US has imposed harsh economic sanctions on Syria, cutting the Syrian people off basic necessities of life and blocking the country’s economic development and reconstruction. Even today, US troops still control Syria’s oil, natural gas and other state resources. They continue to occupy Syria’s principal oil fields and have plundered more than 80% of the country’s oil production. They have smuggled and burned Syria’s grain stock, exacerbating the humanitarian crisis there.?

The US should thoroughly reflect on its war-related crimes, stop its illegal military presence and operations in Syria, lift unilateral sanctions on Syria, and stop stealing oil and grain from Syria. The US needs to return to the Syrian people the freedom, wealth and dignity that are rightfully theirs.?

Hubei Media Group: According to reports, New York just witnessed another bloody weekend with at least 12 shooting incidents between August 26 and 28 alone, which claimed several lives. Some famous personalities including British rock star Ozzy Osbourne have all said that they are “fed up with” the gun violence in the US and decide to leave the country for good. What’s your comment?

Zhao Lijian: I have noted relevant reports. I have also read about how the American people say their way of life has been changed by the constant struggle against mass shootings. “It feels like a numbers game at this point. Not if, but when,” they said. “When is it going to be my unlucky day?” This captures the growing sense of insecurity and fear among the American people living in the shadow of an epidemic of gun violence.?

As of August 4, 2022, there had been an average of 13 mass shootings a week in the US, according to an NBC analysis of data from the Gun Violence Archive. The non-profit organization Everytown for Gun Safety estimates that between 2016 and 2020, every day, more than 110 Americans were killed with guns and more than 200 were shot and wounded, and the average deaths per year stood at more than 40,000. The Financial Times points out in its analysis that gun violence has led to a sharp drop in life expectancy in the US, contributing to a “yawning gulf” with similarly wealthy countries.

Despite the ever-growing list of victims of gun violence, US politicians have failed to take any effective gun control measures so far. All they have to offer are empty words and political stunts, which say nothing but their hypocrisy. The US needs to face up to its poor human rights conditions regarding gun violence and take concrete actions on gun control to stop the violence and protect the American people’s right to life, rather than go around criticizing other countries and using human rights as a pretext to meddle in their internal affairs.

Dragon TV: We noted that Japanese Minister of Defense Hamada Yasukazu commented on hypersonic weapons during an interview with Kyodo News that Japan not only needs to improve missile interceptor capability, but also needs to consider counterattack capability. There are comments saying that this is aimed at deterring China, Russia and the DPRK. Does China have any comment?

Zhao Lijian: In recent years, Japan has been going further down the path of military expansion by significantly ramping up defense expenditure, vigorously developing anti-missile, space, hypersonic weapons and other military technologies, strengthening military cooperation with the US, and seeking to develop the so-called “counterstrike capabilities”. Some in Japan are even clamoring for nuclear-sharing with the US, which would run counter to its pacifist constitution and exclusively defense-oriented policy, and pose a grave threat to peace, security and stability in the Asia-Pacific region. The Japanese side should draw lessons from history, stay committed to the path of peaceful development, earnestly respect the security concerns of its Asian neighbors, and act prudently in the field of military security to earn the trust of its neighboring countries and the international community.