The face-off between the BJP and Delhi’s Sheila Dixit deserves close attention than it has received so far. This is for the first time that an elected leader is facing the charge of misusing public money under the garb of government publicity to further the electoral prospects of the ruling party.

So the fall-out of the case will have a bearing on how the central government and the state governments conduct their publicity campaigns.

Frankly, a publicity campaign is no more than paid news. While the government pays for the publicity campaign to spread the good word about the party and its leaders in power, the party or candidate foots the bill for paid news. Both concepts are not new and these are as old as Charminar though it is only in the recent past that we have become aware of paid news in particular.

Sheila Dixit was caught with her “paid news” because of the folly of one of her close aides. The worthy had gone to the town in self-praise after the Congress veteran had won her third mandate to rule the national capital in 2008. In essence his contention was that they had planned the campaign meticulously and thus were able to derive electoral dividends. It was a good case study for media planners in the public and private sectors. But the BJP saw in the ‘study’ enough ammunition to target Sheila Dixit.

The Lokayukta saw merit in the BJP case and his recommendation for action against Dixit soon became a PUC (paper under consideration) at Raj Niwas and Rashtrapati Bhavan. The matter could have rested there but for the fact that elections are due to the city-state’s assembly in another two-three months.

Whether one can win an election merely on the basis of media blitzkrieg or money is debatable or, for that matter, on the basis of muscle power or star power alone. Haji Mastan and Dev Anand had learnt this the hard way. When politicians have no talking points for street corner meetings, they end up as litigants before the judiciary. 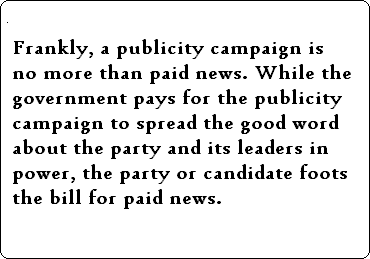 This is what had happened in the BJP-Sheila Dixit face off as well. The Delhi High Court has come into the picture after a “reluctant” police was forced to register a case by a local court.

Sheila Dixit appears to ignore the BJP leaders’ clamour for her scalp. She adopted the same stance to weather the storm created by the mess called Commonwealth Games staged in Delhi three years ago. And got away with no bruises. She may be lucky for the second time.
Firstly because the BJP is a divided house and is unable to put its best foot forward to exploit the anti-incumbency wave. Secondly, there is no threat to her from within the Congress ranks.

Like Arjun Singh, ND Tiwari and Natwar Singh, she had won the “reward points” in plenty from 10 Janpath by taking on the party establishment of the day at Surajkund’s most memorable political jamboree in 1994. Surajkund session marked the beginning of PV’s fall. Years later in 2012, Nitin Gadkari learnt about the ominous spell of Surajkund within days of holding the BJP national executive meeting in this sleepy suburb of Delhi, which was made famous by Tomar Kings in the 10th century.

This historical nugget apart, the fact is that Sheila Dixit has cemented her position in the Congress and in Delhi. Her confidence is reflected in the way she made a soft launch of her campaign for another mandate some six months ago. It is cut in the mould of the 2008 campaign that had made the BJP knock at the doors of Lokayukta.

As pointed out at the outset, government’s indulgence with public money to publicise their achievements is not a new thing. It became pronounced during Indira Gandhi’s emergency, and since then has become a mantra for electoral nirvana.

“Be clear about this home truth. Go ahead and publicise about the PM”, he said in the end. The on-going Bharat Nirman campaign reflects the wisdom of that the grey eminence what with black and white clips of Rajiv Gandhi in TV spots for added emphasis.

Over the years I noticed that the party in power falls back on the government’s publicity machinery as elections approach. It may be because of the fear of the unknown. This fear stems from the reality that the party managers have become power brokers and have allowed themselves to be surrounded by side-kicks. Posters are no substitute for cadres willing to sweat it out.

But most parties forget this maxim once they are voted to power. That is why we saw the BJP pin its hopes on India Shining and the Congress is doing today one-up on BJP with its Bharat Nirman. Well you cannot blame them when charismatic NTR as chief minister saw merit in running a government owned and funded daily to reach out to the masses.

All said and done the question that pops up in the context of BJP-Sheila face off has much wider ramifications. The so called publicity campaigns are not aimed at educating people of their rights and privileges or creating social awareness like it was done in the Nehru era. It is nothing but insuring votes. Why should the public exchequer foot the bill?

Yes, in its excessive exuberance in Delhi, the BJP can be said to have forgotten its own glass houses in Bhopal, Raipur and Gandhinagar. But it appears to be part of a larger game of trade off with the Congress that goes by the name, “No Vadra – No Vanzara”.

(The writer, a Delhi-based journalist, can be reached at mramarao2008@gmail.com)