Elders give nod to Women’s reservation in Indian legislatures 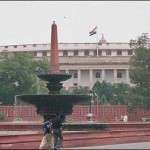 Amidst high drama, India on Tuesday set in motion the process of reserving seats for women in Parliament and state assemblies. Highlights of the Bill.

Rajya Sabha, the House of Elders approved the  Constitution (One Hundred and Eighth Amendment) Bill, 2008 to reserve one-third of all seats for women in the Lok Sabha and the state assemblies.  It is doubtful whether the Congress led government will take up the bill in the Lok Sabha during the on-going budget session.

Informed  circles opine that the the government will be content with the ‘political statement’  made from the Rajya Sabha since with opposition from allies like Trinamul Congress threatens to rock the Manmohan Singh government.

The passage of the bill in the Rajya Sabha was marked by suspension of six members belonging to SP, RJD, and LJP  for their ‘unruly’ behaviour, showing ‘total disregard for dignity of Council’ and ‘authority of the Chair’ by obstructing the business of the House. One unattached member Ejaz Ali was also suspended.

On Monday, these members had indulged in unprecedented unruly scenes and even tried to attack Chairman Hamid Ansari when the Womens’ Reservation Bill was moved by the government.

Highlights of the New Law

•    One third of the total number of seats reserved for Scheduled Castes and Scheduled Tribes shall be reserved for women of those groups in the Lok Sabha and the legislative assemblies.
•    Reserved seats may be allotted by rotation to different constituencies in the state or union territory.
•    Reservation of seats for women shall cease to exist 15 years after the commencement of this Amendment Act.

•    There are divergent views on the reservation policy. Proponents stress the necessity of affirmative action to improve the condition of women. Some recent studies on panchayats have shown the positive effect of reservation on empowerment of women and on allocation of resources.
•    Opponents argue that it would perpetuate the unequal status of women since they would not be perceived to be competing on merit. They also contend that this policy diverts attention from the larger issues of electoral reform such as criminalisation of politics and inner party democracy.
•    Reservation of seats in Parliament restricts choice of voters to women candidates. Therefore, some experts have suggested alternate methods such as reservation in political parties and dual member constituencies.
•    Rotation of reserved constituencies in every election may reduce the incentive for an MP to work for his constituency as he may be ineligible to seek re-election from that constituency.
•    The report examining the 1996 women’s reservation Bill recommended that reservation be provided for women of Other Backward Classes (OBCs) once the Constitution was amended to allow for reservation for OBCs. It also recommended that reservation be extended to the Rajya Sabha and the Legislative Councils. Neither of these recommendations has been incorporated in the Bill.