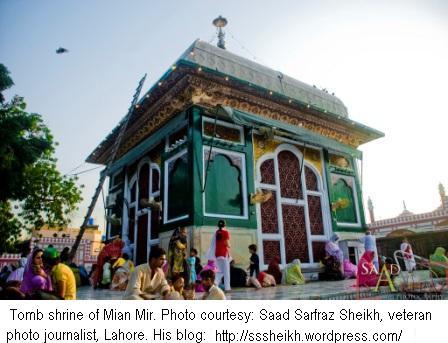 Mian Mir, a Qadri Sufi holds a pivotal rank in Sikh history for laying the foundation stone of the Harmandir Sahab at the Golden Temple in Amritsar, upon the request of Guru Ram Das who considered him the most pious man of the times. Muslim mystics and the Sikh Gurus were affectionate and respectful towards one another. Mian Mir often travelled to Amritsar to meet Guru Arjun Dev and whenever the Guru visited Lahore, he always met with the Muslim Mystic. The quest for God united Muslims, Hindus and Sikhs.

Mian Mir, a Qadri Sufi, laid the foundation stone of the Harmandir Sahab at the Golden Temple in Amritsar, on the request of Guru Ram Das who considered him the most pious man

The Qadri Order was established at Uch near Multan by Shaykh Muhammad al Hussaini al Jilani, a direct descendant of Shaykh Abdul Qadir Jilani during the second half of the fifteenth century. Mian Mir’s ancestors, a family of Qazis came from Siwistan in Sindh. Although Mian Mir did not undergo a comprehensive religious education, his mother taught him mystic disciplines. At the age of twelve the young mystic went into the jungles to practise self-mortification where he became the disciple of Shaykh Khizr.

Later, Mian Mir began to live at the mosques in Lahore, attending the religious sermons of Maulana Sadullah, an outstanding scholar of the city. After perfecting the study of the both the traditional and rational texts, Mian Mir turned to Sufism and began to spend time meditating at the dargahs of prominent Sufis. After some years, Mian Mir began to initiate disciples and drew huge crowds. Fame became a burden and he migrated to Sirhind in the pursuit of seclusion.

However, a year later he quietly returned to settle in Lahore. Avoiding contact with crowds, Mian Mir refused to accept any financial assistance and returned all gift offerings. He would say that people mistook him for a beggar, whereas he was rich with God’s company. The mystic often ventured into the forests during the day, retiring in his cell at night. In his biography of Mian Mir, Dara Shikoh records that Mian Mir never slept at night and for several years used only two breaths from night till sunrise. The Sufis’s life was based upon tawakkul, complete trust in God, epitomized by his once throwing out water on a hot Lahore evening so that none of it remained for the next day.

While on the way to Kashmir from Sirhind in 1620 AD, Emperor Jehangir learnt of this outstanding Sufi. At the emperor’s invitation, Mian Mir visited the royal camp and overwhelmed Jehangir with his spiritual discourse. The emperor was so impressed that he refrained from offering Mian Mir any gift, except a prayer mat. It is believed that when Jehangir came to pay homage to the great Sufi, his entourage and sentinels were stopped at the gate of Mian Mir’s house until they were granted permission to enter.

Along with his son Dara Shikoh, Emperor Shahjehan called twice on Mian Mir at his home at Lahore. He presented the mystic with a turban and prayer beads. Mian Mir kept the rayer beads but returned the turban. Despite attention from the rulers, the mystic remained aloof from worldly authorities. Prince Dara Shikoh was introduced to the Shaykh through Mian Mir’s foremost disciple Mullah Shah. The prince despised the religious orthodoxy of the clerics and became deeply influenced by the teachings of Mian Mir, subsequently becoming a disciple of Mullah Shah. Both Dara and his sister Jehanara remained ardent followers of Mian Mir.

Explaining the significance of the Quranic verse, ‘Pray unto me and I shall hear your prayers’, Mian Mir said that true prayer required that one must expel all other thoughts other than of God from the heart.

Mian Mir taught that Sharia was the first step towards purifying the soul was to follow Tareeqah, the Sufi way. He believed that eating lawful food and performing righteous deeds was the sole way of purifying the heart. On one occasion while explaining the significance of the Quranic verse, ‘ Pray unto me and I shall hear you prayers’, Mian Mir said that true prayer required that one must expel all other thoughts other than of God from the heart.

Mian Mir was fond of musical assemblies, but practiced a self control that stopped him from going into states of spiritual ecstasy. He did not encourage wearing the traditional patched Sufi cloak, lest it attract publicity and gifts. He wore a turban of coarse cloth and a cotton cloak, washed his own clothes in the river while urging his disciples to remain clean and tidy. Mian Mir remained an ardent follower of the Sufi doctrine wahdat ul wujood, Oneness of Being. Just before his death, Mian Mir was struck with a severe stomach ailment but he did not allow the state physicians to treat him.

Mian Mir died on 7 Rabi ul awwal 1045 Hijri/1653 AD and was buried in Lahore. Emperor Shahjehan built Mian Mir’s mausolem. Later Ranjit Singh had the tomb repaired and renovated with money from the royal exchequer. The Maharaja attended the Urs, death anniversary celebrations regularly and made handsome contributions. Mian Mir’s dargah continues to be venerated by Muslims and followers of the Sikh faith.