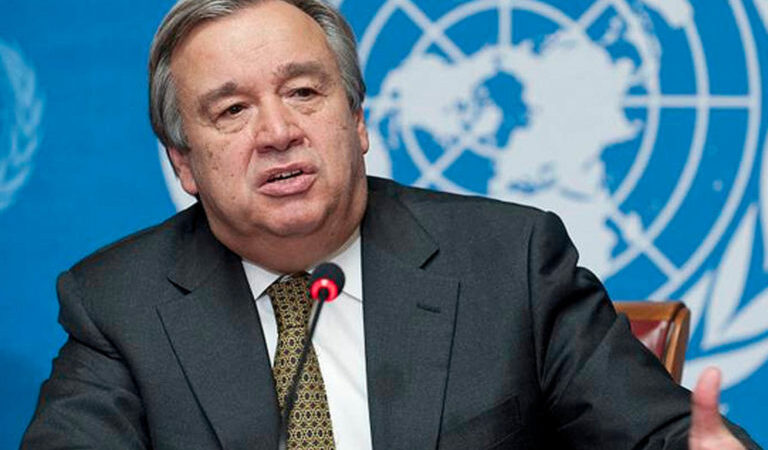 U.N. Secretary-General Antonio Guterres has called on China to follow recommendations made in a report on Xinjiang published by the UN Human Rights High Commissioner Michele Bachelet this week, which concluded that China’s repression of the Uyghurs and other Muslim groups in the region “may constitute crimes against humanity.”

Stephane Dujarric, the spokesperson for the U.N. Secretary-General, told reporters on Thursday that Guterres hopes China would “take on board the recommendations” made in the report released by the High Commissioner a day earlier, according to Al Jazeera. Dujarric said the report “confirms what the Secretary-General has been saying on Xinjiang for quite some time, that human rights must be respected and the Uyghur community need to be respected.”

Thursday’s statement marks the first time the Secretary-General has openly called on China to follow through on the recommendations in the Xinjiang report released in the last minutes of Bachelet’s last day in office as the UN Human Rights High Commissioner. Prior to the release of the report, High Commissioner Bachelet’s office had faced tremendous pressure from China not to publish it.

The 46-page report found that human rights violations documented in the Office of the High Commissioner for Human Rights’ (OHCHR) assessment, flow from “a domestic ‘anti-terrorism law system’ that is deeply problematic from the perspective of international human rights norms and standards.”

The report covers the period beginning in early 2017 during which Chinese authorities arbitrarily detained up to 1.8 million Uyghurs and other Turkic minorities in internment camps in Xinjiang, according to numerous investigative reports by rights groups, researchers, foreign media and think tanks.

The predominantly Muslim groups have also been subjected to torture, forced sterilizations and forced labor, as well as the eradication of their linguistic, cultural and religious traditions, in what the United States and several Western parliaments have called genocide and crimes against humanity.

OHCHR’s report makes 13 recommendations to the Chinese government, including promptly releasing those detained arbitrarily in vocational education and training centers, prisons or other detention facilities and releasing details about the location of Uyghurs in Xinjiang who have been out of touch with relatives abroad, establish safe means of communication for them, and allow travel so families can be reunited.

The report also recommends that China investigate allegations of human rights abuses in the vocational education and training centers, including allegations of torture, sexual violence, forced labor and deaths in custody.

China immediately condemned the release of Bachelet’s report. China’s Permanent Mission to the U.N. Office at Geneva was the first one to dismiss it.

Chinese Foreign Ministry spokesperson Wang Wenbin blamed the U.S. and its Western allies as the mastermind behind the release of the U.N. Xinjiang report.

While Wang attacked the legitimacy and credibility of the report, he went on to use it to justify China’s narrative denying that atrocities taking place in Xinjiang.

“The fact that this assessment, despite its illegality and zero credibility, did not go so far as to play up false allegations such as “genocide”, “forced labor”, “religious oppression” and “forced sterilization” shows that the lies of the century concocted by the US and some Western forces have already collapsed,” he said.

On Thursday, the U.S. and other governments welcomed Bachelet’s report.

White House press secretary Katrine Jean-Pierre said Thursday that the Biden Administration welcomed the report and stated, “The report deepens our grave concern regarding the ongoing genocide and crimes against humanity that China is perpetrating. Our position on the atrocities in Xinjiang has been clearly demonstrated with our words and in our actions.”

“We call on China to immediately cease committing these atrocities,” she said.

The White House statement followed one by U.S. Secretary of State Antony Blinken, who said Washington would work closely with its partners, civil society and the international community to seek justice and accountability for Uyghur victims and continue to hold China to account.

Joseph Borrell, the High Representative of the European Union for Foreign Affairs and Security Policy also welcomed the report and said, “As the report states, the human rights situation in the Xinjiang Uyghur Autonomous Region requires urgent attention by the Chinese government, the United Nations, in particular, its human rights bodies, as well as the international community more broadly.”

“The EU joins the call by UN experts reporting to the Human Rights Council to closely monitor, report, and assess the human rights situation in China.”

Other statements applauding the report’s findings came from the foreign ministries of the U.K., Germany, and Japan.