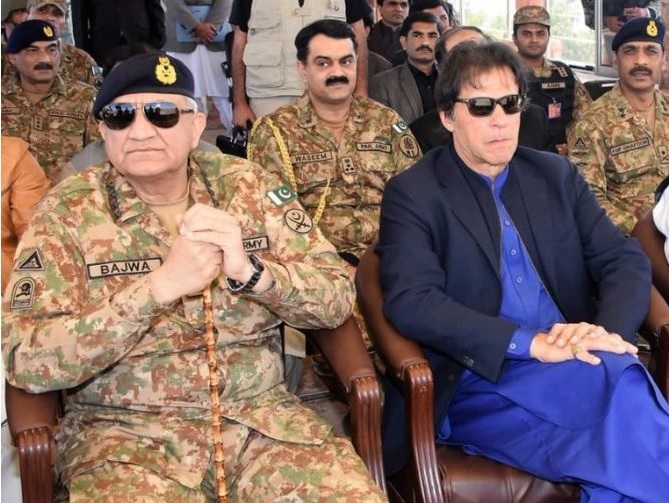 By Malladi Rama Rao
Three year extension to Pakistan Army Chief Gen Qamar Javed Bajwa does not come as a surprise though the decision has received a mixed reaction in the political circles. It is a thank you gift to the selector by the selected Prime Minister Imran Khan, who, as an in –house backgrounder to American law makers says, is an off-shoot of the military-judicial nexus. Khan could have waited to present his gift since the convention is to give extension to the incumbent or announce a successor just in time. But he did not; there is as yet no explanation either from the Prime Minister himself or his brains trusts.

So it has become a Sudoku, more so after China was quick to welcome extension to an ‘Old friend’ and declared: “We believe under the leadership of Gen Bajwa , Pakistan Army will continue to make contributions to upholding Pakistan’s sovereignty and security interests and regional peace and Stability.” The Chinese certificate signals the deep inroads the Bamboo capitalist has made into a country which is known to be governed by three ‘A’s – Allah, America and Saudi Arabia.

Leaking roofs however assert that the tenure extension was part of a deal with the United States that was struck during the 23 July working meeting between Prime Minister Imran Khan and President Donald Trump with the General in attendance. India’s plan to abrogation of Art 370 that gave special status to Jammu & Kashmir state was also decided by then with their knowledge and this is reason why, says the leaking roofs that Pakistan did not take any “concrete” action. It is difficult to verify the veracity of these claims since Imran Khan and his foreign minister Shah Mahmood Qureshi are working overtime to denounce India as the blue blooded jihadis even after they have drawn a blank on the diplomatic circuit.

Imran’s threat of a nuclear war cannot be deemed as a rhetoric or belligerent disposition to please a highly surcharge anti-India audience at home. It is an issue for a much closer examination and it does not have a bearing on Bajwa extension in the short run. As an opposition leader, Imran Khan opposed a second term for the Army Chiefs. But as Prime Minister he announced Bajwa extension without waiting for a Presidential decree as required under the Pakistan law.

Was he prompted by his natural instinct of gratitude or was he pressurized to act three months in advance and go to the town with the decision through a press release?

Imran Khan is a Pathan, and as a true Pathan he is known for his loyalty. He is not an ignoramus politician, who invites ridicule in public by demonstrating his allegiance to the Khakis. He has thus far maintained a modicum of distance from the GHQ Shura and let the impression gain by his actions like appointing the Army Chief to the newly constituted National Development Council that the Army is working in tandem with his government. This background leaves the field open to the question: Did Gen Bajwa force Imran Khan’s hand. It has sparked animated discussions in and outside Pakistan.

Doctrine of necessity is what Pakistan Army chiefs subscribe to and as a corollary of the theory, claim at least a second tenure at the helm of GHQ Shura. As Gen Pervez Musharraf writes in his auto-biography, the Pakistan Army respects and obeys the man in the chair with the winds in his favour. The August winds were favourable to Bajwa and he is the darling of the Americans and the Taliban alike.

But three months down the line with a peace deal in place, and with no guarantee of any clearly visible role to the GHQ, it will be a new ball game. The Taliban have already distanced themselves from Pakistani assertions that Kashmir issue would have a bearing on the Afghan peace plans. In the past, when they were in driver’s seat, the Taliban had refused to accept the Durand Line that divides Afghanistan and Pakistan.

The emerging scenario has the potential to dwarf Bajwa, and make the prospects of getting extension more and more difficult what with the Kashmir issue gone. The situation is compounded by FATF factor. The global watch dog on terror funding – Financial Action Task Force will take a call in October on whether to blacklist Pakistan and thus choke its finances.

The Americans have promised a veto on FATF action in return for Taliban deal, which Gen Bajwa has assured his American interlocutors. The Pakistan Army is not willing to give up its militancy option on the Kashmir theatre. It wants radical Islamists some leeway for the purpose. Flash point loomed large over civil-military relations and put in jeopardy the Bajwa extension itself.

However radicalised the disciplined Pakistani Army is an enterprise of careerists with their undiluted love for increments, promotions and cushy postings. Extension of tenure to the top man will mar the promotion prospects down the chain, and the very talk of another term to Gen Bajwa has sparked rumblings. At least twenty Lt Generals will have to go home without a promotion (seven of them will retire next December itself, four will go in October 2021 and six in September 2022) while their chief enjoys the perks and privileges of the high office till Nov 2022, as Haider Naqvi reported in The News International on 21 August.

How serious the rumblings are remain unclear but the fact remains that Gen Bajwa has felt the need to have his own loyalist at the helm of ISI to keep a watchful eye. Lt. Gen. Faiz Hameed has been given the coveted post. He had played a stellar role though behind the scenes in the victory of Imran Khan in the 2018 election by managing the non PML (Nawaz) parties.

Going by the Musharraf -speak, ‘rebellion’ against Gen Bajwa has been pre-empted by the extension announcement. Will that mean no work for Hameed?

Much depends as much on Kashmir scene as on how the Taliban moves to settle scores with the Pakistan establishment, which is blamed for the terror attack at the Kuchlak Madarsa Mosque, 25 kms from Quetta. It is a high security place and the meeting point for ISI and the Taliban. The blast claimed the life of Hafiz Ahmadullah, brother of Afghan-Taliban Chief Harbatullah Akhunzada. This is the second high profile Taliban killing, the first being of Taliban Army Chief Sadr Ibrahim in Kandahar recently after he fell out with his Pak handlers.
(Courtesy: POREG)

More from NewsMore posts in News »