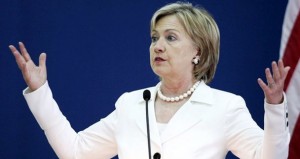 US Secretary of State Hillary Clinton tried to reach out to the people of Pakistan, share their concern and put across the US concerns during her three day visit to the country. She met student groups, politicians, journalists, and women groups. Given here are excerpts from her ’round table with radio journalists’ in Islamabad, which was broadcast live on Oct 29 tooundtable with Radio Journalists