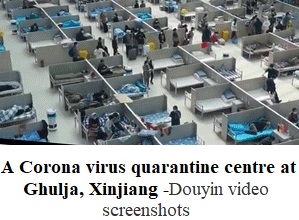 More than 600 mostly young Uyghurs from a village in Ghulja were detained by authorities in Xinjiang on Monday after they ignored a strict COVID-19 lockdown and staged a peaceful street protest against a lack of food that has led to starvation and deaths, a local police officer said.

The detention figure was much higher than China’s official number issued the same day on an official police website stating that only two people who violated the lockdown restrictions in Ghulja (in Chinese, Yining) city were sentenced to five days of detention.

Ghulja, a city of roughly a half-million mainly Uyghurs and other Turkic minorities in Ili (Yili) Kazakh Autonomous Prefecture in the northern part of the Xinjiang Uyghur Autonomous Region (XUAR), has been under lockdown since early August, prompted by outbreaks of COVID-19.

Video posted by Uyghurs on Chinese social media last week showed that strict policies were denying them medical care and preventing them from getting food, leading to starvation in some cases. RFA could not independently verify the videos.

The lockdowns, along with mandatory testing, are part of China’s “zero-COVID” approach to preventing the further spread of the highly contagious respiratory virus, but they have triggered exorbitant commodity prices, significant food shortages, and a lack of health care, especially for those living below the poverty line.

In response to the zero-COVID policy, the residents of Ghulja’s Karadong village walked en masse out of their homes and took to the streets.

“We came out because of the deaths, otherwise we would have remained silent,” a Uyghur protester said in a soundbite of a social media post on Monday. “Look at these people who took to the streets! We, the people of Karadong village of Ghulja city, took to the streets! They [the authorities] did not send any aid here; therefore, people took to the streets when they couldn’t endure it.”

The villagers demonstrated despite warnings that aired on state-run Xinjiang TV warning citizens that authorities would punish them as “separatists” if they “spread rumors” about the wave of COVID-19 infection in the area.

When asked by RFA about the number of protesters arrested, an officer at the Karadong Town 2 Police Station said 617 people from Karadong village had been detained. He also said officers from his station arrested 182 people in the neighborhood for which they are responsible.

“Most of them are misguided youths — 17, 18, 19 [years old] or even younger,” he said. “Some of them I have spoken to. They all said they did wrong and acknowledged the [Chinese Communist] Party’s and the government’s benevolence. During the interrogations, they all expressed remorse.”

“Village and township cadres are visiting and distributing flour, oil and meat,” he said. “Economically well-off families in the village are also helping the poor.”

“Those handling the case know this. We don’t know. They haven’t informed us yet,” he said.

An officer at the Ghulja City Police Command Center declined to provide information about the protesters over the phone.

“Please ask the relevant offices,” he said. “We cannot provide information about this. There is data published by the police department about this, look it up online.”

But when RFA pointed out to him that there was a difference between the information posted online and what the officer from the Karadong Town 2 Police Station said, he replied: “I don’t know how many cases have been filed in this case. The prosecutors know that.”

Many Uyghurs have posted short videos of the starvation they are experiencing on China’s Douyin video-hosting service, though some of them, including some Han Chinese, complained that censors were deleting their videos.

A warning in the Uyghur language telling residents not to post any information about the COVID lockdown on social media appeared on Douyin on Monday.

“Starting today until Sept. 18, nobody is allowed to share any news, any graphic with news written on it, or images of desperate expressions or videos on social media, especially in separate chat rooms because our country will hold its National Congress on October 18,” the message said. “We’re all fully aware of it. That is why we must strictly abide by this.”

The Chinese government wants to prevent large-scale COVID outbreaks in Xinjiang and other parts of China in the run-up to the 20th National Congress of the Chinese Communist Party, when the party’s national policy goals for the next five years will be set and its top leadership elected.

Meanwhile, Uyghur residents have complained that their residential management offices are charging exorbitant fees to deliver for food donated from outside the area, while Uyghurs from outside Ghulja say housing manager have refused to accept food they wanted to donate to help those in the city environs who need it.

Members of Uyghur organizations abroad demonstrated peacefully over the weekend to protest the starvation of Ghulja in front of Chinese embassies and consulates around the world, in the United States, Canada, Belgium, the Netherlands, France, Australia and Turkey.

Adrian Zenz, a researcher at the Washington, D.C.-based Victims of Communism Memorial Foundation and expert on the Xinjiang region, tweeted Monday, “terrible things are transpiring from Uyghur regions, including severe and potentially life-threatening conditions caused by lockdowns.”

“My heart very much goes out to the Uyghur community at this time, praying for strength in the face of what appear to be depictions of utter desperation and even death amid a ruthless COVID lockdown,” he tweeted. “Years of oppression have left Uyghurs in the region utterly helpless.”

As many as a dozen people in Ghulja country have died from starvation or lack of access to medicine since the coronavirus lockdown was imposed by Chinese authorities, RFA reported on Sept. 9, citing information from residents and local officials.

At the end of August, the United Nations’ human rights chief issued a report on Xinjiang, saying that China’s arbitrary detention and repression of Uyghurs and other Turkic minorities in the region “may constitute international crimes, in particular crimes against humanity.”