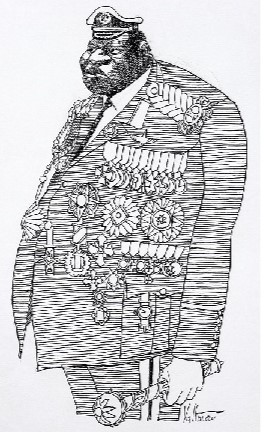 Fifty years ago – in early August 1972 – President Idi Amin summarily decreed the expulsion of Uganda’s “Asian” (that is, Indian and Pakistani) community. Over 50,000 people were given a scant three months to tie up their affairs and leave the country. There was a scramble to secure new homes for people rendered stateless by the Amin decree. For months, European and American media carried reports that dramatised the human misery of Uganda’s Asians.

All the attention paid to the plight of the Asian community has made it hard to see the much wider, much more violent history of Amin’s economic programme. It was Africans, not Asians, who were the targets of this larger campaign. Amin called it the “War of Economic Independence”; later it was named the “Economic War”.

Over the past decade, I’ve been working with Ugandan colleagues to organise, catalogue and digitise endangered government archives. This work has brought the political and organisational logic of Amin’s regime into view. The Economic War was fought by government officials who overhauled, all at once, whole sections of public life. It was a regulatory war, pursued by authorities who sought to control prices and supervise the conduct of business. It was a war in which a great many Ugandans were unwittingly made into enemies of state.

The inhumanity of the Economic War was much more widely experienced than anniversary events marking the “Asian expulsion” can acknowledge.

It was supposed to be a war of liberation. In the speech that announced it, Amin hymned the Economic War as:

The Economic War made some Ugandans feel as though they were living in momentous times.

By the end of 1972, 5,655 farms, ranches and estates had been vacated by the departed Asian community. The abandoned properties fell under the custodianship of a new bureaucracy – the Departed Asians Property Custodial Board – which allocated houses and business premises to African tenants.

Here, in the conduct of business, was a theatre where black Ugandans could fight for their freedom. The “days of bargaining are done”, read a headline in the Voice of Uganda. The public expected the “new shopkeeper in their town or village to be dedicated and very hard working”, a “man of integrity and honesty” (Voice of Uganda, 9 December 1972).

New procedures were created to superintend the conduct of black-run business. Amin himself took an active interest in the matter. In the months following the expulsion of Asians, he made surprise tours of Kampala’s businesses two or three times a week. On every tour of inspection, he would give directions: he would tell a businessman to change his method of work, rearrange the stock or keep better records.

In the archives of the Uganda Broadcasting Corporation, there are hundreds of photographs of Abdallah Nasur, the governor of central province. Canadian diplomats reported that he spent his time:

making surprise visits to the various business establishments, finding them in breach of various written or unwritten government regulations, closing their business, and allocating them to new owners.

In the photos, Nasur is always at the centre of the frame, thrusting himself into the lives and businesses of Kampala’s people.

In this way, petty brutality was made to look like vigour.

Early in 1975, Amin published the Economic Crimes Decree. It established a military court called the Economic Crimes Tribunal. Its judges were empowered to punish profiteers, hoarders and others who acted against the economic interests of the state. The penalty was death by firing squad or 10 years in prison.

By April, traders charged with selling goods in excess of established government prices were being arrested and executed. In one case, the tribunal ordered the execution of two dozen men who were found attempting to smuggle 500 bags of coffee out of the country.

The targets of the Economic Crimes Tribunal were people without connections: petty traders, market women, people whose financial strategies ran afoul of government edicts. The most emotionally affecting pictures in the whole photographic archive are from a series made in March 1975. The photos depict people brought before the tribunal at a military barracks. The cameraman took dozens of pictures, most of them close-ups of individuals as they faced the judges.

In one photo there is a girl, her arms crossed, staring defiantly at the camera. In another photo there is a middle-aged woman, wearing a print dress, staring at the ground with tears in her eyes, her hand at her forehead. The photos were made to document the identities of the people who were being judged. What they captured, instead, is their fragility, their emotion, their nervousness, their innocence. They are evidence of the arbitrariness of justice and the cheapness of life.

Out of the hundreds of pictures taken at the Economic Crimes Tribunal, only one was ever printed or published in the government newspaper. Were the image-makers of Idi Amin’s regime squeamish about the tribunal’s draconian powers? Did they sympathise with the people whose lives were destroyed by the tribunal?

In 1992, Uganda’s new ruler – Yoweri Museveni – announced that the property seized from Asian owners in 1972 was to be restored to them. Asians who wished to reclaim properties could obtain the titles from the Departed Asians Property Custodial Board; claimants were obliged to secure the eviction of Ugandan tenants themselves.

Today the board retains custody of several hundred properties. Its leadership is under parliamentary investigation: billions of Ugandan shillings have been stolen from its accounts, and its managers are accused of handing important buildings over to well-connected proprietors.

Among the many wrongs of the 1970s, among the many lives that were disrupted or ended by Amin’s regime, it is the expulsion of the Asian community that has been the focus of ongoing efforts at compensation and rectification. No one has made apology to the hundreds of innocent, terrified men and women who were pictured, in their last hour, on trial before the Economic Crimes Tribunal. ( Courtesy: The Conversation)

*The writer is Professor of History and African Studies, University of Michigan

The carricature of Idi Amin is by Edmund S. Valtman ( https://commons.wikimedia.org/w/index.php?curid=6383780)