India accuses China of ‘militarisation of the Taiwan Strait’ 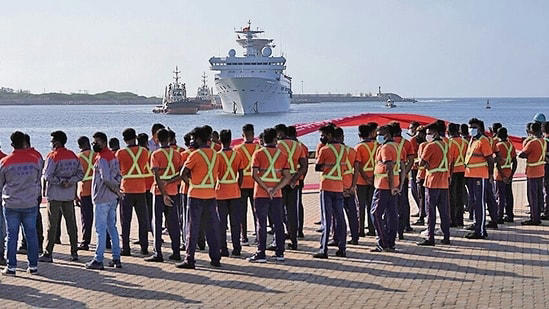 India has accused China of “militarisation of the Taiwan Strait”, in an escalating war of words triggered by a Chinese military ship docking in a controversial Sri Lankan port.

A Chinese military research vessel docked at Sri Lanka’s Hambantota port for a week this month (August). Analysts say the Yuan Wang 5 is among a group of Chinese ships operated by the People’s Liberation Army that monitor satellite, rocket and intercontinental ballistic missile launches. The docking of the Yuan Wang 5 was delayed for several days after India objected, amid fears that Beijing intends to use the port as a military base. China’s foreign affairs ministry had said the vessel was conducting maritime research, in line with international law and practice, and would not affect “the security and economic interests of any country”.

The Yuan Wang 5 left a week ago, but over the weekend China’s embassy in Sri Lanka accused India of using security concerns to conduct “de facto thorough interference in Sri Lanka’s sovereignty and independence”.

On Saturday, India’s high commission in Colombo said Sri Lanka “needs support, not unwanted pressure or unnecessary controversies to serve another country’s agenda”. It also referred to “debt-driven agendas”, in apparent reference to the Chinese-funded Hambantota port, which is often tied to accusations of Chinese debt-trap diplomacy.

Sri Lanka is currently navigating its way out of its worst-ever economic crisis, and is balancing the competing influences of India and China, both of which analysts say it needs. Chinese loans account for about 10% of the nation’s total foreign debt. But since this year, India has also lent about $3.8bn to help Sri Lanka through its economic crisis. Wen-ti Sung, a political scientist at the Australian National University specialising on Taiwan and China, said Delhi was creating “new bargaining leverages” in accusing China of “militarisation” of the strait, by normalising “tougher rhetoric” which it could offer to discontinue in future negotiations.

“Knowing that China does not want escalation on multiple fronts, India is venturing to create a new leverage where none existed before, by calling China out on Taiwan,” Sung said, noting China’s domestic pressures with the coming 20th party congress, when President Xi Jinping will seek a third term.

The ship docked at Hambantota just a week after China completed its large-scale military drills around Taiwan, in response to a visit by the US House speaker, Nancy Pelosi. Since those drills ended, China’s military has continued with increased activity which analysts have labelled a concerning “new normal”.

There are now near daily crossings of the media line, an unofficial border dividing the Taiwan Strait, but which China has recently claimed as its sovereign waters###.