Is India gaining over China in island nation? 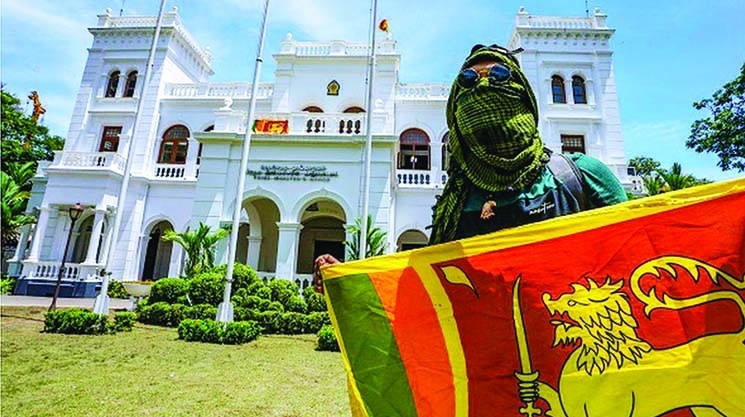 Slogans like – “Don’t sell the country to India and the US “; “India: Sri Lanka is not another state”; and “India don’t exploit Sri Lanka’s situation” – could be widely heard during the demonstrations.

But while anti-Indian sentiments like these still persist, how Sri Lankans view India might be changing as the country grapples with political and economic chaos.

When Sri Lanka suddenly found itself in a deep economic mess a few months back, it turned to India and the Bharatiya Janata Party (BJP ) government in Delhi responded with financial help.This was not the first time though – in fact, no other country or institution has helped Sri Lanka as much as India in the past year.

Experts say that Sri Lanka’s desperate financial need, in a way, has helped Delhi regain its influence in the island-nation of 22 million people after China made inroads by offering loans and other forms of financial aid for infrastructure projects in the past 15 years.

“India has played a very crucial role, especially at this critical juncture. We have gone through an immense crisis as a country, and India has come forward and supported US ,” Sajith Premadasa, Sri Lanka’s main opposition leader, told the BBC.

India and Sri Lanka share close cultural, religious and economic ties in a relationship that goes back centuries.Delhi has been a major trade partner for Colombo, which imports lots of products, especially food items, from India . The island nation’s minority Tamil population shares close cultural and ethnic links with people in the south
Indian state of Tamil Nadu.

Colombo moved away from the Indian sphere of influence starting 2005, after Mahinda Rajapaksa was elected president. The gradual shift was consolidated during his second term, which saw several agreements with China on infrastructure projects, such as a port in the southern town of Hambantota.Figures show that China has loaned more than $5bn to Sri Lanka so far, about 10% of Sri Lanka’s total external debt.

Despite Sri Lanka seeking additional loans to tackle its current problems – a crippling shortage of fuel and soaring food prices – Beijing is yet to commit on any new loans.India, on the other hand, has provided around $3.5bn as credit and currency swap. As part of the credit line, it has dispatched several shipments of much-needed fuel, food and fertilisers to Sri Lanka in recent months.

In addition to the loans by Delhi, the government of Tamil Nadu, led by Chief Minister MK Stalin of the DMK party, has also sent shipments of food and medicine to Sri Lanka.

Experts say that India ‘s multi-billion-dollar financial assistance has led to a shift in public perception among Sri Lankans.

“India has provided timely help by sending us fuel and food. Without India n assistance it would have been difficult for Sri Lanka,” Tyronne Sebastian, a private sector employee says.

Melanie Gunathilake, a social activist, says she is grateful to the people of India for “the amazing show of solidarity and support”.

Experts say that India ‘s decision to offer assistance to Sri Lanka also has strategic significance – one that gives Delhi leverage over its neighbour.

After the initial credit line by India was announced, both countries in January agreed to jointly operate 61 giant oil tanks built during World War II in the north-eastern Trincomalee harbour. For over 30 years, India has been trying to access the British-era facility which will enable it to store strategic oil reserves.

Similarly, last September, the Indian conglomerate Adani group was given a majority stake in a contract to build and operate the Western Container Terminal at the strategic Colombo port.

“I don’t think any country will help us without wanting something in return for themselves. India will, of course, be looking after their interest,” Harini Amarasuriya, an MP from the Left-wing National People’s Power Alliance, told the BBC.

Ms Amarasuriya says that just like India , Sri Lanka too needs to make decisions that are in its best interests, and that it remains to be seen whether the country would have to give up control of its economic and strategic locations.

Experts say that the question of Sri Lanka’s Tamil minorities and their demand for rights would also continue to impact diplomatic negotiations with India .

Colombo accused Delhi of providing arms and training to the militants, who were fighting for a separate homeland for the Tamils in Sri Lanka.

The civil war ended with the defeat of the rebels in May 2009, and India stood with the Sri Lankan government during the war.

Sri Lanka is, however, yet to fully implement the 1987 India -Sri Lanka Peace Accord which promised new laws to devolve powers to all provinces, including where the Tamils were in a majority.

“In the past there was always a worry that there was a direct intervention by India in political terms,” Ms Amarasuriya says.

The current economic crisis, however, is expected to override political concerns between the two nations for now.

Already, several Sri Lankans, particularly from the Tamil-dominated north, have sought refuge in Tamil Nadu due to the economic crisis and their numbers could increase if the economic situation worsens in the island nation.

Sri Lanka’s minority Tamil and Muslim communities have always looked up to India as and when they faced problems and wanted equal rights.Despite the past irritants, many from the majority Sinhalese community also appreciate India ‘s help in recent months.

“The Lanka-Indian Oil Corporation is still providing some supply that keeps us going,” says IT professional Mohammed Suffiyan.”If not for India , our fuel stations across the country would have shut down completely###