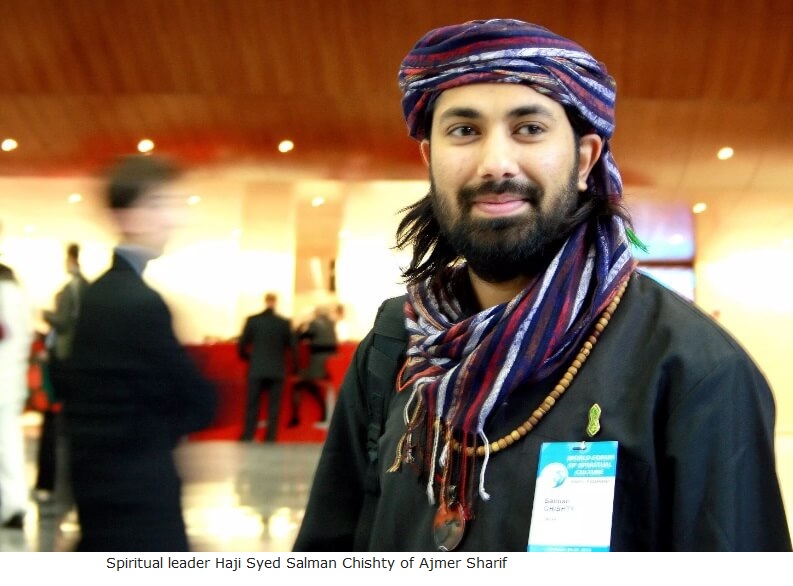 Haji Syed Salman Chishty, scholar- saint, whose lineage goes back all the way to the Holy Prophet of Islam, sees no merit in Islamabad’s criticism of New Delhi’s decision to abrogate Art 370, a British media report said.

Pakistan criticism of India is “misplaced”, and “misinformation”, he said in an address at the University of Geneva on Friday, and remarked that Art 370 of the Indian Constitution gave “only a sense of superficial security to Kashmir”, British Herald said in a report.

Haji Syed Salman Chishty is the hereditary custodian of the renowned Ajmer Sharif– the mausoleum of the 11th Century Sufi Grand Master Hz. Khwaja Moinuddin Hasan Chishty in Rajasthan, India. Thousands from all communities from all over South Asia and beyond visit the shrine every day to invoke the blessings of Sufi saint, hailed as Khwaja Garib Nawaz. For Kashmir, known as the land of Sufi saints, the connection with Ajmer Sharif is deep.

Observing that Pakistan’s own blindness restricts them to see “the full picture”, Salman Chishty said Art 370 of the Indian Constitution had given only a sense of superficial security to Kashmir. “The government of India made a very bold decision to take away a temporary provision known as Article 370, which had given a sense only of superficial security [to Kashmir]. The stipulation was only provisional”, the report quoted him as telling his audience.

On Pakistan’s contention that abrogation of Article 370 and 35(A) were a deliberate attempt by New Delhi to sabotage the Muslims of Jammu and Kashmir, the spiritual leader said, “Pakistan has their own ideas, their own language that they can use and justify whatever they think about 8 or 9 crore Muslims in Kashmir. When they put these numbers, do they become blind to see 180 million Muslims across India living peacefully, happily contributing to the nation-state building for over hundreds of years? It is their own blindness which restricts them to see the full picture that India is”.

He said that people in Jammu and Kashmir have a prosperous future ahead. “Kashmiris they know for sure that the future for their children, for themselves couldn’t better anywhere else than India. Every Kashmiri on the ground knows by their heart and they know for sure that this is where they belong, which is India”, the Sufi spiritual leader said.

Saying that the age-old syncretic beauty of Kashmir cannot be taken away from Kashmir, Syed Salman Chishty commended the Kashmiriyat as a great virtue. “The Kashmiriyat is in true essence which is lived by these people who believe in the syncretic and puristic value of being Kashmiri and really realizing the values and the importance in their daily lives of these traditions which have been passed on from their fathers, grandfathers and generations. And that is true Kashmiriyat is!”

Going forward, Haji Syed Salman Chishty expressed a wish for dialogue to continue. The youth, in particular, he emphasized, should be integral actors in discussions, negotiations, and peace movements as they are the ones who will lead future generations in Kashmir and beyond.

“These voices will not only be heard across India,” he declared, “but they will make a mark globally.”

Salman Chishty went on to say that openness, integration, and newfound opportunities that could not previously be reached because of the forces of hate, fear, and division have become attainable with the revocation of Article 370.

“India is a land where everyone can not only see but experience the freedom of religious expression; the constitution of India gives this right.”