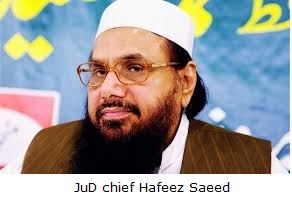 by Sanchita Bhattacharya
On August 27, 2019, the Lahore High Court reportedly issued notices to the parties concerned on a petition seeking to quash the First Information Reports (FIRs) against Jamaat-ud-Dawah (JuD) ‘chief’ and Lashkar-e-Taiba (LeT) founder Hafiz Muhammad Saeed and 65 others. The Court sought replies in the matter from the Federal Government, Punjab Government and the regional headquarters of the Counter-Terrorism Department (CTD) within two weeks.

Significantly, Malik Zafar Iqbal, Secretary, Al-Infal Trust (a subsidiary of JuD), contended in his petition that there were 23 FIRs registered at different Police Stations against Hafiz Saeed and others, under false charges. He claimed that the impugned FIRs described the petitioner as the head of LeT, which, Iqbal asserted, was both factually and legally incorrect. The petition sought the quashing of all the FIRs.

On July 3, 2019, CTD had registered 23 FIRs against JuD leaders, including Saeed, on charges of terror financing, in different cities of the Punjab Province, specifically, Lahore, Gujranwala and Multan. The FIRs contained allegations of collection of funds for terrorism financing through assets/properties made and held in the names of Trusts/Non-Profit Organisations (NPO) including Al-Anfaal Trust, Dawatul Irshad Trust, and Muaz Bin Jabal Education Trust.

Saeed was arrested on July 17, 2019, by the Counter-Terrorism Police in Gujranwala, Punjab, under charges of terror financing. On August 7, 2019, the CTD of Punjab Police declared Saeed “guilty of terror financing” in the Anti-Terrorism Court (ATC) in the Gujranwala District of the Punjab Province. Presently, Saeed is being kept at Lahore’s Kot Lakhpat prison amid high security. May 15, 2019, reports indicate that the Pakistani Government had also arrested JuD’s ‘second-in-command’ or ‘Naib Emir’, Abdul Rehman Makki, Saeed’s brother-in-law, on charges of making an extremist public speech and terror financing.

Nevertheless, given Pakistan’s past record, Saeed is likely to be freed soon.

According to various media reports, Saeed has, so far, been ‘arrested’ nine times (including the latest occasion) and released thereafter. He was last arrested on January 30, 2017. However, predictably, the Judicial Review Board of Pakistan’s Punjab province ordered his release on November 22, 2017, on the grounds that “the government was not able to present any evidence to justify [Saeed’s] continued detention.” There is little reason to believe that the Government will abruptly present any decisive evidence to the courts this time around.

Meanwhile, JuD was banned on March 7, 2019, along with seven of its affiliated groups. The organisations which were proscribed included Al-Anfaal Trust, Idara Khidmat-e-Khalaq, Al-Dawat ul Irshad, Mosques & Welfare Trust, Al-Medina Foundation, Muaz Bin Jabal Education Trust and Al-Hamad Trust. All these groups are Lahore-based. Apart from these, the Lahore-based Al-Fazal Foundation/Trust and Al-Easar Foundation were also banned for having links with the Falah-i-Insaliyat Foundation (FIF), another JuD front. The FIF, like JuD, had also been banned in March 2019 by the Pakistan Government.

The Government also ‘took control’ of JuD and FIF properties, including seminaries and mosques across the country. According to the Punjab Police, as reported on March 7, 2019, the Government seized control of 160 seminaries, 32 schools, two colleges, four hospitals, 178 ambulances and 153 dispensaries associated with JuD and FIF in Punjab. The Punjab Home Department later disclosed that the seized properties, spread across 36 Districts of the Province, were ‘taken over’ by the respective district administrations. The district administrators took control of the management and operational conduct of the properties. There was, however, no report of any change of staff in the establishments and they continued to be run by the same people who were running them previously, indicating that the takeover was a sham. Indeed, it was further clarified that the administrators’ role would only be that of a ‘supervisor’.

Significantly, Saeed was asked to keep a low profile at his Jauhar Town residence in Lahore and was barred from entering the JuD headquarters in the Markaz-e-Taiba complex in Muridke and Jamia Al Qadsia in Lahore.

The ban and the subsequent action, however, had no major impact on JuD’s functioning. Notably, soon after the ban, JuD joined hands with other groups to carry out terrorist activities on its behalf. According to an August 12, 2019, report, intelligence inputs suggested that JuD was using fringe groups for terror financing and money laundering. JuD has also been misleading the United States and global anti-terror watchdogs by using Jihadi ‘tanzeems’ (organisations) who are not on the banned list to carry out its terror-related operations.

This is not the first time that the JuD has collaborated with other groups. In the year 2011, more than 40 Islamist and right-wing parties and groups in Pakistan joined together to establish the Difa-e-Pakistan Council (DPC) or the Defense of Pakistan Council, led by the JuD, including the Ahl-e-Sunnat Wal Jamaat (ASWJ), the new name of the sectarian terror outfit Sipah-e-Sahaba Pakistan (SSP). The presence of JuD and the ASWJ in the DPC, where most of the other parties and groups were those who openly participated in national politics, was worrisome as it signified the radicalisation of Pakistani Civil Society. Indeed, the DPC openly held several anti-Shia, anti-Barelvi, anti-Ahmadi, anti-Christian public rallies in various cities of Pakistan, including, Karachi, Lahore, Rawalpindi and Multan, to promote Islamist extremism. In one such incident, as reported in February 2012, the DPC vehemently campaigned against a mosque in Rawalpindi run by the Ahmadiyya community.

Overtly, JuD acts as a socio-religious, cultural, spiritual and educational force, but underpins its armed wing, LeT. JuD’s funding sources include charities, state sponsorship, and businesses. Funds are transferred from various sources through banks, use of hawala (illegal money transactions) and by couriers. Funds are used for dawa (preaching), khidmat-e-khalq (provision of social services), and jihad, including recruitment, training, and procurement of equipment and weapons. JuD has also used social media to collect funds. According to officials, JuD’s network includes 300 seminaries and schools, hospitals, a publishing house and an ambulance service. JuD and FIF have about 50,000 volunteers and hundreds of paid workers.
Actions against externally directed terror formations in Pakistan, including the JuD led by Saeed, have long been a mere eye wash, intended to safeguard Pakistan from punitive action by international agencies and the West. In the immediate context, the Financial Action Task Force (FATF), during its meeting on June 16-21, 2019, retained Pakistan, as expected, on its ‘grey list’, along with seven other countries. A FATF spokesman categorically stated, “The FATF has decided to continue to keep Pakistan on its compliance document (i.e. Grey List) for the ICRG [International Co-operation Review Group] monitoring…” Pakistan has been on the FATF grey list for the second time since June 2018. Pakistan was first put on the grey list in 2012 and remained there for three years.

More recently, on August 23, 2019, FATF’s Asia-Pacific Group (APG) placed Pakistan on its Blacklist for its failure in meeting required global standards and its failure to combat terrorism and money laundering. Pakistan was put in the Enhanced Blacklist because the country was non-compliant in 32 of the 40 compliance associated elements of the FATF and ranked low in 10 of the 11 Effectiveness Parameters. FATF’s 40 recommendations are related to money laundering, terrorist financing, targeted financial sanctions related to terrorism & terrorist financing, financial intelligence units, etc.

Pakistan is now under pressure to avoid its entry into the FATF Blacklist in October 2019, when FATF will hold its Plenary meeting in Paris to decide on Pakistan’s status. This final FATF meeting is crucial, as it would be decided either to exclude Pakistan from the grey list, keep it there, or put the country into the blacklist.

If Pakistan lands on the list, which indicates that the country concerned is “non-cooperative” in the global fight against money laundering and terrorist financing, the FATF members could, as an ultimate recourse, even agree to restrict, target or prohibit financial transactions with Islamabad. This would not only negatively impact foreign investor sentiment but also lead to a downgrading of the country by multilateral lenders like the International Monetary Fund (IMF), World Bank, Asian Development Bank (ADB) and the European Union (EU). This would have grave consequences for Pakistan’s financial sector and its economy, which are already reeling under severe stress, with foreign investment dwindling, and funding avenues to keep the country afloat drying up. Pakistan is expected to grow at less than 3 per cent in both 2019 and 2020, according to the IMF. As of March 2019, the country’s outstanding debt was more than USD 85 billion. It has taken loans from a very large number of countries, the largest creditor being China.

In his recent visit to the US, in the month of July, Pakistan’s Prime Minister, Imran Khan admitted that about 30,000 to 40,000 “armed people”, who fought in Afghanistan or Kashmir, were in Pakistan. He also stated, “There were 40 different militant groups operating within Pakistan…” Reiterating Pakistan’s ‘commitment’ to fight terrorism, he said, “There was a watershed in Pakistani politics. In 2014, the Pakistani Taliban slaughtered 150 school children at Army Public School (in Peshawar). All the political parties signed the National Action Plan and we all decided after that, that we will not allow any militant groups to operate inside Pakistan.”

Khan’s formulation “we will not allow any militant groups to operate inside Pakistan”, is crucial. Islamabad has no doubt gone after domestic terror formations operating within the country, but has studiously protected groups operating from Pakistani soil and targeting other countries, particularly Afghanistan and India. Terrorist formations such as the JuD-LeT complex and its affiliates, Jaish-e-Muhammad, the various groupings operating under the United Jihad Council, and of course, the Taliban and Haqqani Network, continue to flourish in Pakistan, under state protection and patronage. Despite Pakistan mounting internal difficulties and looming economic catastrophe that would follow a FATF blacklisting, Islamabad remains a minimal satisfier, going through the formal motions of some elements of compliance, even as its favoured terrorist formations continue to operate with impunity.