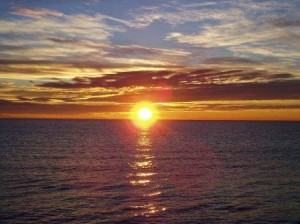 Yes that is supposed to be a question but with time I think it has settled into an incomplete saying. Everyday when we get up to start a new day we have an aim, whether it is signing a multimillion dollar contract or going to college just to attend one 45 minute lecture or just reading the newspaper early in the morning (something I personally look forward to).

And we all have our share of squabbles if things don’t go in an expected manner …like the lecture getting cancelled, the contract to be signed refusing to materialize because of new conditions set by the other party or in my case, tantrums my parents by now are well-accustomed to, during the national holidays when the newspaper is not printed.

Once I started thinking that whether it was karma watching us keenly, but then if it was so he must be darn bored by now. But then again isn’t Karma God’s little assistant?

Not everyone starts their day with an aim. They just get up and go about their work of the day. Sometimes some new changes come along but otherwise it’s as monotonous as watching the same movie over and over again sometimes with different advertisement breaks.

Frankly, I dread for my life to have such a time again as the first time I was searching for my college and ended up sitting at home for almost a year, I went crazy with nothing to do! I mean how many days will I spend with friends? I simply felt miserable and nameless.

Either way, are the people with ‘aims’ and people with ‘no aims’ any different? ’Cause in the end who are we doing this for? Who is out there waiting to applaud when we achieve something great or who is there to criticize when we make a mistake? God! Oh no, He is the director of this show, the puppet master. So who is sitting on the stands and silently observing us as we play our parts?

Once I started thinking that whether it was karma watching us keenly, but then if it was so he must be darn bored by now. But then again isn’t Karma God’s little assistant?

Often it is said people with ‘aim’ bring about success and growth to the economy. If it is indeed so, what are the ‘aimless’ doing? How are they contributing? A friend jokingly said that an empty mind is a devil’s workshop and so they must be the ones who play major politics and backbiting games and indulge in unforgiving criminal acts.

It’s not in my nature to portray idle minds as devil’s babies. Because, they are not. They are the people with no aim; they must get out of their homes and try to contribute to the society in any manner they can. At least, these idlers must try to do some work just to be occupied. People with no aims may realize this and start doing something or at least think of some action when they get up in the morning.

As I said before they all have their roles to play. In fact I have presented this in a very black in white manner as surely grey exists in the world but it was done only in order to find out who the audience is? Could it be that there is a ministry of followers beneath God who are quietly sitting on the back seats and smiling down at some of us who are wondering about their identity?