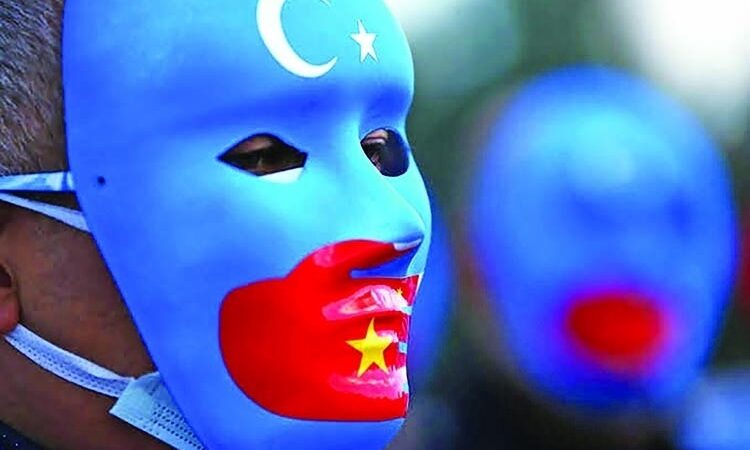 The Uyghur people have been subjugated by their own state in the Chinese province of Xinjiang for many years. Since 2014, this persecution has become worse, and more recent events pose a danger to the whole civilization.

Muslim-majority nations have turned a blind eye, and the COVID-19 pandemic and the present crisis in Europe have mostly consumed the attention of the world, leaving the Uyghur community to suffer in silence.

The Uyghurs are Turkic-speaking ethnic minority, mostly Muslims, with historical and cultural links to Central Asian nations. The Xinjiang area in northwest China is home to estimated 12 million Uyghurs, who have their own language and culture. Xinjiang is larger than France, Germany, and Spain combined, and along with Tibet, is one of the five supposedly “autonomous” regions in China. In reality, however, Communist Party exercises absolute authority over Xinjiang.

To rid the Turkic Muslim population of Islamic radicalism, China has been implementing the ‘Strike Hard’ Campaign in Xinjiang since 2014.

Since then, activists, journalists, and academics have drawn attention to the plight of the Muslims in Xinjiang, who are being forced to give up their ethnic, religious, and cultural identities. The Belt and Road initiative of China includes Xinjiang, which is bordered by Kazakhstan, Russia, Pakistan, Afghanistan, and India. China works to disprove separatist ideas to stop more movements for freedom like the one in Hong Kong.

The Chinese government prevents even traditional Muslim names, as well as wearing veils and growing beards too. China regularly conducts checks on the area using one of the most sophisticated and intrusive surveillance systems in the world. In some instances, the government has even put-up security cameras inside people’s residences.

Forcing women to undergo sterilization or to use contraceptive implants is a harsh measure. Since the COVID-19 pandemic, there has been an uptick in forced sterilizations.

The Chinese government has started moving children from their homes and transferring them to exclusive boarding schools where neither their culture nor Islam are taught. Only once every two weeks are their relatives allowed to visit, and they are barred from using the Uyghur language. If families try to fight back in any way, they are sent to “political re-education” camps that have been set up all over the area.

The re-education camps in Xinjiang, officially called Vocational Education and Training Centers by the Communist Party of China, were established under General Secretary Xi Jinping’s administration. Though the government denies the existence of these camps, the UN estimates that the current number of Muslim detainees is in excess of 1.5 million. In this camp, they are kept in inhumane conditions.

Every day, individuals are forced to spend hours studying communist propaganda while chanting Xi Jinping’s praises and well wishes for a long life. Additionally, they endure constant brainwashing and humiliation. This camp also witnessed a number of deaths. The camps want everyone to always follow and praise the rules set by the Communist government of mainland China.

Denying this results in penalties including being tied to chairs for hours, beaten and tortured, waterboarded, and forced to eat only pork and alcohol, all of which are strictly forbidden in Islam. Members who are women have to deal with sexual abuse, such as rape, forced abortions, forced use of birth control, and forced sterilization.

The response of Muslim-majority nations to the situation in Xinjiang distinguishes it from the plights of Palestinians, Kashmiris, and Rohingyas. For economic and political reasons, the leaders of Islamic countries have mostly ignored the screams of their compatriots in Xinjiang. What this means is that China has rapidly become an important commercial and diplomatic partner to almost all of the big Islamic states.

Most of the Islamic nations depend on China either politically or economically. Malaysia relies on Chinese investment more than any other country. China accounts for one-tenth of Saudi Arabia’s oil exports, and China purchases around one-third of Iran’s oil exports. Iran’s typically outspoken government has been rather quiet on the unprecedented internment in Xinjiang. They heavily depend on them.

With a price tag of over $60 billion, the China-Pakistan Economic Corridor is a massive infrastructural project. The Uyghur movement has been going on for decades, but the Pakistani government has said nothing about it. This is because China has invested in Pakistan and because China and Pakistan both dislike India and the US.

Turkey could fight for the Uyghurs’ rights. But Turkish officials have remained mute, though they have historical, cultural, and linguistic similarities between Turks and Uyghurs. Turkey’s economy has a persistent current account deficit, and Erdogan’s questionable policies have made Western investors much less likely to invest, which puts a lot of pressure on the local currency.

Erdogan thought that China would spend a lot of money as a result of his administration’s lack of action. This materialized in June 2019, when the People’s Bank of China sent $1 billion to support the Turkish economy and set up further agreements.

China’s Belt and Road infrastructure program has brought billions of dollars in investment and political collaboration to other nations in Asia and Africa with a Muslim majority.

Even the most influential Muslim nations have concluded it is better to align with China’s economic strength than to speak up for human rights. These nations are unwilling to criticize Chinese policy, even if it amounts to genocide, for fear of damaging ties with China or China’s veto power in the United Nations Security Council. The suffering of the Uyghurs has been ignored by all of these forces.

In the 21st century, when politics and economic growth require much more than humanity, the issue of whether or not to help the Uyghur people has become a quandary.


—-*The writer is a studying international relation at the University of Dhaka.

( This commentary first appeared on dailyasianage.com)