Myth of The Zero-Zero Tibetans questioned whether “silent sealing” or stability maintenance: RFA 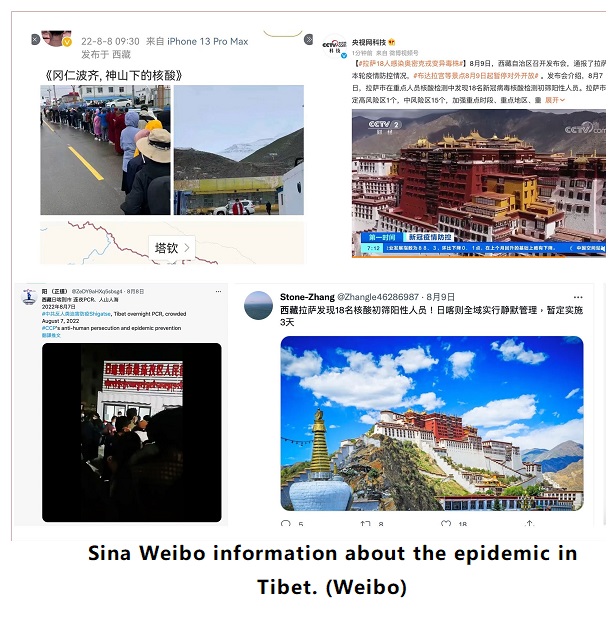 Ali, Shigatse, Lhasa and other places in the Tibet Autonomous Region have successively reported cases of new crown diagnosis, which are described as the final loss of the Pure Land after 900 days of zero.

Shigatse has entered the “silent sealing”, and some hoteliers have confirmed that the local “cannot enter, cannot go out”, has become a lockdown. The Jokhang Temple, the Potala Palace and other scenic spots in Lhasa have been closed, and Tibetans have lined up in the middle of the night to buy rice dumplings and prepare to flee, saying that they are “not afraid of the virus, but afraid of being locked down.”

Xinjiang, Tibet, Gansu, Hainan, Sanya and other summer tourism hotspots have outbreaks of epidemics, especially the official media reported that Tibet after more than 900 days of zero, re-transmission of cases the most concerned, some netizens asked: Where is the pure land in China?

Chinese state media reported on August 9 that the outbreak of the epidemic in many places in Tibet has started regional nucleic acids, 18 people in Lhasa, the capital of the Tibet Autonomous Region, have been infected with the Omicron mutation strain, and the Potala Palace and other scenic spots have been temporarily closed to the public since August 9.

Officials said that the strain of infection in this epidemic is Aomi Kerong BA.2.76, and Lhasa Has designated 1 high-risk area and 15 medium-risk areas to strengthen key epidemic prevention and control. In addition, there are 4 foreign tourists positive in ali area, all of whom are asymptomatic infected; 5 people were found positive in Shigatse.

The city of Shigatse in Tibet announced the implementation of “silent management” throughout the territory, tentatively scheduled for 3 days. The Xigaze Epidemic Prevention and Control Center announced that bars, KTV, Tibetan restaurants, bathing places and other types of space-enclosed entertainment venues and various public cultural and sports activity venues such as museums and cultural centers are temporarily suspended.

Strictly control the gathering of personnel, cancel all activities in all units in the city, temporarily do not hold large-scale meetings, forums and other activities, “happy events are postponed, funerals are simplified, banquets are not held” and so on.

Videos circulating on Twitter showed long queues at nucleic acid testing stations in Shigatse, with photographers saying, “They are all people, queuing up to do nucleic acids.”

Radio Free Asia dialled a cross-ocean call on the 10th to inquire about a five-star hotel in Shigatse, and Ms. Liu at the front desk confirmed: “Our entire Shigatse is locked down, and we cannot enter or leave.” She mentioned that a lot of people cancel their bookings.

RFA reporter: “What if I don’t eat?

Ms. Liu: “I don’t know, just inside the house, how to say it? Most entertainment venues are locked down, and some places to buy vegetables seem to be available.
RFA reporter: “How long do nucleic acids?”

China News Network reported that as of now, at least 601 people have been identified in Tibet for close contact and sub-close contact, and all of them have been isolated and controlled.

Some netizens felt discouraged, and left a message on Weibo saying: “All the trips to Tibet have been cancelled”, “I only went to one scenic spot, as if I didn’t come to Tibet”, “The epidemic has receded, Tashi Delek”.

The Potala Palace and the Jokhang Temple are closed

Radio Free Asia called on the 10th to inquire about the opening of the Potala Palace, and the operator said: “These two days are closed, and you can’t go.” “As for when it will open? “Notice is pending,” she said.”

RFA station has repeatedly called the Xigaze and Lhasa epidemic prevention and control centers, and all of them are in the state of being on the phone.

Also inquired about a five-star hotel in Lhasa, the front desk Miss Qu said: “It can be over, but it is not recommended, first slow down, or don’t come, most of the guests are rushed back.” She said that the guests “rushed” to leave because they were worried that If Lhasa became a “high risk”, they were afraid that they would not be able to enter other provinces and would not be able to leave.

Miss Qu said that at present, it takes 48 hours to enter Lhasa, nucleic acid health code, itinerary code are green codes, and you can still shop in Lhasa and eat in restaurants, but she stressed, “There will be changes in policies every day, I don’t know if there will be new notices tomorrow?”

She mentioned that in some places, you have to pay five dollars for nucleic acid.