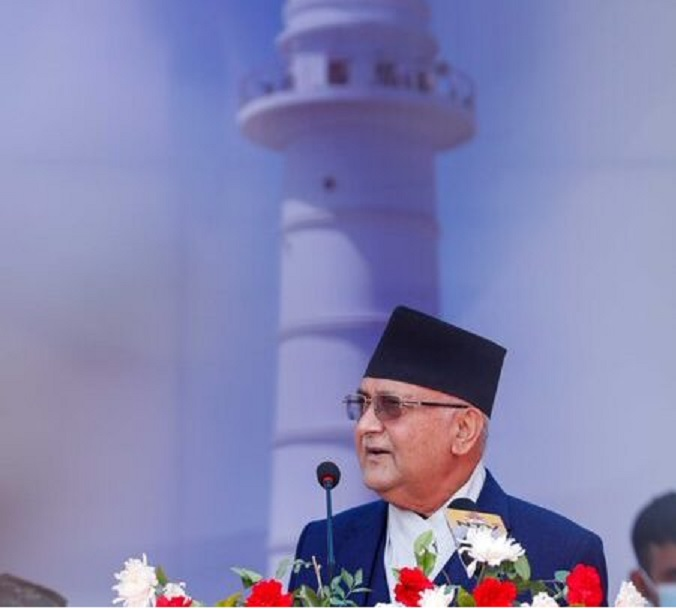 Nepal Prime Minister K.P. Sharma Oli has told BBC in an interview that misunderstandings with India have been resolved. This is no more than a complete somersault since his reign saw Nepal- India relations nose dive even as the Dragon’s shadow lengthened over the tiny Himalayan nation. The interview was broadcast on the day a faction of the Madhes based Janata Samajwadi Party, JSP, considered close to India joined his government.

Oli went on to compare India – Nepal relationship with that of Chile – Argentina. The two Latin American neighbours were embroiled once in disputes along their long border. They are amicably living now after resolving all their disputes.

In so many words, Oli contention is that if the Latin Americans can achieve a turnaround in their relations why not we two in south Asia. “Nepal has a unique relationship with India, unlike with any other country”, he remarked and quipped: “Neighbours share both love and problems.”

The Oli-speak augurs well for Nepal- India relations. But his approach to matters India does raise some pertinent questions if not doubts.

Right from the first general elections under the new constitution, Oli has adopted a strong nationalist rhetoric and made India bashing his election plank, The four-month plus border blockade (during late 2015 – early 2016) became his ammunition to fire on all cylinders at New Delhi.

As Prime Ministers he neither moderated or toned down the anti-India tirade. Any and every occasion became a good occasion to belittle India before the eyes of Nepalis.

In his first stint as Prime Minister from October 2015 to August 2016, Oli enjoyed the Maoist support. He had stepped down once the Maoists withdrew their props. This paved the way for a government by Maoist leader Prachanda and Nepali Congress Chief Sher Bahadur Deuba.

Oli returned to power in February 2018 with near two- third majority in the 275 – member Pratinidhi Sabha as the head of Communist Party of Nepal (CPN) which he had formed by merging his UML and Prachanda’s Maoists.

His style of functioning did not endear him to a section of the old UML guard and the Prachanda’s storm troopers. This coupled with the internal contradictions in CPN plunged his government into a crisis with dissidents mounting a campaign for his scalp. Step down as the party chief or else resign as PM, they told him in mid-2020.

Oli tried to deflect the attack by training his guns on India. He blamed India and its diplomatic mission in Kathmandu for his troubles; he accused them of instigating the ruling party dissidents as well as the Opposition to topple his government.

Chinese envoy HouYanqi sprang up in his support and held shuttle politicomacy (political diplomacy) to cajole disgruntled leaders like Madhav Nepal, Jhala Nath Khanal and others. She also had a good word with Prachanda and other Opposition leaders. The cue for her mission came from none other than President Xi Jinping who had reportedly offered some gyan to end the political crisis.

This outsourced “over soul” effort offered no breather to Oli nor did it stop Oli – Prachanda break- up. It exposed the overarching inclination of Oli towards China.

Throughout last year (2020) Oli worked overtime to cling to power but gave little political space to dissident leaders and his alliance partner. Finding himself pushed to the wall, he did what any beleaguered leader would do – dissolve Parliament and order fresh elections.

President Bhandari allowed his whim in December last but the Supreme Court struck down her act. It is thus the Parliament had a second life but it gasped for breath in a short while as Oli and Bhandari unexpectedly found the tide turn their way.

All this is history and is worth no more than a quick recap. The short point is that Oli is still in the driver’s seat as Prime Minister till the elections are held. Much would depend on the verdict of the Constitution bench of the Nepal Supreme Court, which is hearing the case against the second dissolution of Parliament.

Giving a new twist to the Nepalese politics, China has once again busied itself in saving Nnepali communism from becoming the new amoeba. It has played its cards at the highest level. President Bidya Devi Bhandari rang up President Xi Jinping and soon afterwards she summoned Prime Minister Oli for an urgent “briefing”.

For the record the three-way communication was said to be about the fight against Covid-19 pandemic. But the giveaway was Oli’s conciliatory gestures towards his bête noire, Madhav Nepal, who is leading the 27-strong dissident UML lawmakers. They are all among the politicians who have knocked at the apex court to thwart Oli plans.

Peace parleys failed to the dismay of the Dragon. The dissidents are unwilling to trust Oli. “Oli cannot be trusted”, according to them.

Oli knows, even if he is unwilling to admit on record, that there is no anti-India sentiment at play today and all his efforts to whip up anti -India mood have by and large floundered. Some time ago, he had pump primed a row over Kalapani, carto-graphed a new map, and poked fun at the Indian Ayodhya. These issues have faded out as speedily as they appeared on the headlines.

Wily Oli is a quick learner, undoubtedly and he may be rearranging his act with an eye on the ballot box. The ball is in his court; if he really means what he says Nepal and India can hope to “move forward, looking at the future.”

Otherwise, his new avatar will remain no more than an India friendly façade.

And the Oli speak will be taken as a jumla with an eye on the voters’ pulse.

Nothing more nothing less.