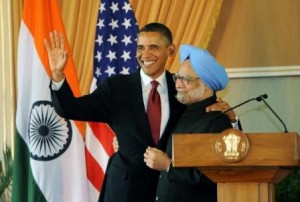 US President Barack Obama has endorsed India’s longstanding bid for a permanent seat on the United Nations Security Council.

Obama announced the policy shift in his Monday (Nov Eight) afternoon speech to India’s parliament—a speech that was planned as the climax to his three-day visit to India. Obama used the occasion to make Washington’s case for a global strategic partnership between US imperialism and the Indian bourgeoisie.

“In Asia and around the world,” declared Obama, “India is not simply emerging; India has already emerged. And it is my firm belief that the relationship between the United States and India—bound by our shared interests and values—will be one of the defining partnerships of the 21st century. This is the partnership I have come here to build.”

Obama’s support for India’s bid for permanent UN Security Council membership was widely and correctly interpreted in the US media as a step calculated to aggravate China, against which the Obama administration has adopted an increasingly provocative stance over the past year. The Washington Post called Obama’s backing for India “a powerful endorsement of India’s growing economic power and global aspirations, but one likely to anger China.”

India and China have rapidly growing economic ties. But their relations are strained by a fractious border dispute, competition for oil and other resources to feed their expanding economies, India’s fears of China’s close relations with Pakistan, Beijing’s expanding influence throughout South Asia, and Beijing’s concerns that New Delhi is being drawn into a US-led Asian-Pacific military-strategic bloc.

Washington is anxious to harness India to its drive to contain and, if need be counter, a rising China. Toward that end, it has aggressively courted New Delhi for the past decade, including spearheading a successful campaign to lift a three decade-old international embargo on civilian nuclear trade with India.

“The United States,” Obama told the parliamentarians, “not only welcomes India as a rising global power; we fervently support it, and we have worked to help make it a reality.”

In the run-up to Obama’s India visit—the first leg of a 10-day, four country Asian tour from which China has demonstrably been excluded—several key figures in the previous administration of George W. Bush called for the US to do more to cement the Indo-US partnership. Among their proposals was that Washington publicly support New Delhi’s campaign for permanent Security Council membership.

Obama’s announcement leaves China as the odd-man out. It is the only one of the five current veto-wielding UN powers not to have publicly supported India’s bid to join them as a permanent member of the Security Council.

But important as was Obama’s announcement—hitherto his administration had endorsed only the bid of Japan, the other pivot of its China containment strategy, for permanent UN Security Council status—it was largely symbolic.

Any reform of the UN Security Council would call into question the powers and prerogatives of the existing permanent members—the US, Russia, Britain, France and China—many of whose relative economic and geo-political power is much diminished from what it was when the victors of World War II created the UN. Moreover, the raise of new states to the status of permanent members would not only dilute the power of the current members, it would change regional geo-political dynamics and thus stir up a hornet nest of opposition.

Obama’s announcement was also short on specifics. He did not say whether the US supports India having a veto as do the existing permanent members. (There have been various proposals for a second-tier of permanent members). And he tied Washington’s support for India’s bid for permanent Security Council status to a broader, that is to say even more potentially contentious, reform of the UN—a reform that does not figure anywhere near the top of US diplomatic and geo-political priorities.

Speaking to reporters about the US’s support for India gaining permanent Security Council membership, the US Under Secretary of State for Political Affairs William Burns conceded, “This is bound to be a very difficult process and it’s bound to take a significant amount of time.”

That said, under conditions of world economic crisis and rising geo-political tensions, symbols can have major significance. Obama clearly wanted to send a message to both New Delhi and to Beijing as to the lengths that the US is ready to go to strengthen its relations with India.

The first country to respond to Obama’s speech was Pakistan. Its Foreign Ministry issued a statement that warned that the attempt to make India a permanent member would add “complexity to the process” of reforming the Security Council and urged the US not to follow the “exigencies of power politics.”

Throughout his three-day visit, Obama sought to balance the assiduous courting of New Delhi, with the need not to overly antagonize Islamabad. The US depends on Pakistan for its continued support for the Afghan War.

Obama began his visit in Mumbai, staying in and delivering a speech from the Taj Hotel, which was one of the targets of the November 2008 terrorist attack. India has charged that sections of the Pakistani military-intelligence apparatus helped organize the attack. But to the widely-voiced dismay of the Indian media and Bharatiya Janata Party (BJP), India’s official opposition, Obama made no mention of Pakistan in his Taj address condemning terrorism.

Obama did denounce “terrorist safe havens” in Pakistan in his speech to India’s parliament Monday. But he also encouraged India to pursue a peace dialogue with Pakistan, while making clear that Washington has no intention of mediating between the two states, let alone seeking to impose a settlement. India has spelled out in the strongest terms that any attempt by the US to intervene in its dispute with Pakistan, especially the explosive Kashmir dispute, would jeopardize the Indo-US partnership.

Prior to Obama’s visit, Pakistani officials had said that that they were looking to the US President to raise the question of Kashmir but in deference to the wishes of his Indian hosts, Obama appears to have made not a single public mention of Kashmir during his entire visit.

Nevertheless, India was not entirely satisfied. At a joint press conference with Obama, Prime Minister Manmohan Singh justified India’s refusal to resume the composite peace dialogue with Pakistan that was suspended after the 2008 Mumbai attack, accusing Pakistan of continuing to practice “terror-induced coercion.” Said Singh, “You cannot simultaneously be talking and at the same time the terror machine is as active as before.”

Obama’s speech to India’s parliament was full of rhetorical flourishes meant to flatter the Indian elite and encourage its appetite for increased power and influence in Asia and globally.

Thus he waxed eloquent about India having “emerged” as a world power and about the “economic marvel” that “has lifted tens of millions from poverty and created one of the world’s largest middle classes”—this is in a country where hundreds of millions are malnourished and where three-quarters of the population survives on less than $2 per day.

Obama made clear that Washington aims for a multi-dimensional partnership with India. This includes an ever expanding commercial relationship, in which US companies will be given access to key sectors such as financial services, multi-brand retail, and agricultural where they are world leaders; and a military-strategic partnership, aimed at what Obama called preserving “peace and security” and “strengthening (international) democratic governance and human rights.”

During Obama’s visit, Indian and US officials announced several major military contracts, including the largest every Indian armaments order from the US, an agreement to purchase 10 C-17 Globemaster III military transport aircraft.

Washington is determined to wrest large military contracts from India, to boost major aeronautics firms and other US arms manufacturers, but also in order to make India’s military dependent on US supplies and technology.

While Obama did not make specific mention of it in his address, the US has also made clear its support for India assuming a greater role in the policing of the Indian Ocean and regional disaster relief and other emergency interventions.

But for all the phrases from Obama meant to convey the idea that the US and India are now “two global powers” and two “great democracies” acting together as equals, he gave a brief but pointed indication of the true relationship that the US seeks with India. Near the conclusion of his speech, he baldly declared that with “increased power comes increased responsibility,” then went on to affirm that India has a “responsibility” to back US policy in regards to Iran and Burma.

Ignoring the fact that the US has arbitrarily sought to rewrite the rules of the world nuclear regulatory regime as part of its campaign to bully and subvert Iran, Obama urged India to join with the US to ensure “every nation” meets “its international obligations—and that includes the Islamic Republic of Iran.”

Obama explicitly criticized India for not slavishly following Washington’s self-interested and selective human rights campaigns. Routinely governments that are viewed as obstacles to US interests, be they Iran, Cuba, or Zimbabwe, are pilloried for their repressive polices so as to isolate and destabilize them, while the crimes of authoritarian regimes that are US allies, are excused and covered up—to say nothing of the horrific crimes perpetrated by the US military, most recently in Iraq and Afghanistan.

“Faced with … gross violations of human rights,” said Obama, “it is the responsibility of the international community—especially leaders like the United States and India—to condemn” them. “If I can be frank, in international fora, India has often avoided these issues.”

The Indian ruling elite is gambling that it can secure the benefits of a close partnership with the US, while not becoming ensnared in a subordinate relationship to the US that makes it a proxy in Washington’s drive to maintain, through bullying and war, its domination of the Middle East and Asia.

This is a dangerous wager, one with potentially catastrophic consequences for the people of South Asia and the world.( By Keith Jones, wsws.org)