New Delhi: The Obama –Hu Jintao speak on India-Pakistan ties, particularly vocal support to ‘the improvement and growth of relations’ between India and Pakistan has not gone down well with Delhi. While Indian spokesman Vishnu Prakash has curtly stated ‘A third country role cannot be envisaged nor is it necessary’ in resolving all outstanding issues with Pakistan, noted American experts like Ashley Tellis termed the Obama – Hu Jintao remarks as ‘most unhelpful and counterproductive’. There is a general agreement in diplomatic circles that the new stand of US would cast a shadow over Prime Minister Manmohan Singh’s visit to Washington from Nov 21.

Vishnu Prakash statement reiterated India’s commitment “to resolving all outstanding issues with Pakistan through a peaceful bilateral dialogue in accordance with the Simla Agreement”. He also made it clear that a meaningful dialogue with Pakistan can take place ‘only in an environment free from terror or the threat of terror’.

US appears to have quickly reacted to the mood in Delhi because Under Secretary of State for Political Affairs Bill Burns has said ‘nothing much’ should be read in to the joint statement.

‘US relationship with China’, he clarified, ‘will not be at the expense of India’.

Burns also said the United States’s interest in perusing ‘the best and healthiest possible’ partnership with China, will not come be ‘at the expense of other increasingly important partnership, particularly our relationship with India’.

And he went on to add: It is for India and Pakistan to decide on the ‘scope, content and pace’ of the peace process.

Burns utilised his address to the Carnegie Endowment for International Peace in Washington on Nov 18 to outline Obama administration’s deep commitment to deepen ties with India.

“From counterterrorism to non-proliferation, education and agriculture, science and technology and women’s empowerment, our cooperation reflects the depth and breadth of the relationship between the world’s two largest democracies. It also illustrates the deep connections not just between our governments, but more importantly, between our societies and our people.
Let me conclude with a simple observation”, he stated.

Remarking that few relationships around the world matter more to our collective future, or hold greater promise for constructive action on the challenges that matter most to all of us, than the partnership between the United States and India, the US official stated ‘That doesn’t mean that we will always agree, because we won’t. That doesn’t mean that we can always avoid mutual suspicions or misunderstandings, because we can’t. But together we can build, on the solid foundation that already exists, an even stronger partnership that serves not only the interests of our two countries, but of the rest of the international community’.

Text of Burns speak at the Carnegie Endowment for International Peace 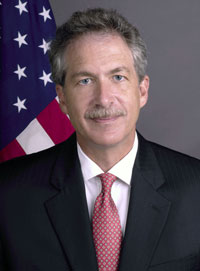 Economic Growth
Since India’s sweeping liberalization of the early 1990s, whose chief architect is now India’s Prime Minister, economic cooperation has always been a driver of progress between our two countries. Today is no different. India has weathered the global economic downturn better than most, with growth projected at more than 6% this year. Such growth can be a stabilizing force within the global economy when other economies are stagnating. We appreciate the leadership role that India has played in the G20 and look forward to an expanded role for India as the international economic architecture adapts to new challenges and new realities.
India’s growing workforce, with the largest pool of English speakers and ambitious young entrepreneurs in the world, presents another immense opportunity for India and its partners to capitalize on globalization. We’ve been negotiating bilateral trade frameworks with India with the aim of bolstering our commercial activity in areas such as infrastructure, health care services, information, communications technology, and education services. As India continues to enhance its business climate, I’m confident that more American companies will be drawn to its dynamic market.
We’re also trying to leverage the private sector by re-launching a CEO Forum of top American and Indian business leaders during the Prime Minister’s visit. Our hope is that the Forum will inform the choices of government leaders, as it has in the past, and thereby enhance our joint competitiveness and ingenuity. The CEO Forum can also complement our work in industries and disciplines where private sector interests play a prime role in both countries – in education, science and technology, and on the full range of global economic policy issues facing us. We need to harness their creativity to find new solutions for sustained economic growth, which will greatly depend on the move away from old fossil-fuel development to more low carbon, energy efficient alternatives.
Clean Energy and Climate Change
Development of clean energy and the contributions it can make to climate change have been a third area of cooperation that we have pursued intensively over the past several months. Much has been made of differences in Indian and American positions leading up to the Copenhagen Conference. While those differences are real, we are working in the spirit of our partnership toward a successful outcome at Copenhagen.
At the same time that we develop common ground in complicated multilateral negotiations, we are pursuing bilateral and regional cooperation on a range of green initiatives that draw on our joint scientific and technological resources. These initiatives include work in solar and wind energy, second generation biofuels, forestry management, and on a range of energy efficiency initiatives. We are also exploring a joint clean energy research center to foster innovation and accelerate deployment of clean energy technologies.
At a practical level, Indian and American scientists work together on a daily basis to enhance India’s capabilities to generate clean energy. In solar and wind power, our National Renewable Energy Laboratory exchanges data and cutting-edge research with counterpart centers in India. We also want to help India meet its National Solar Mission target of producing 20 gigawatts of solar power by 2020. Given the magnitude of capital investment it takes to reach even the first solar gigawatt, we hope work with the private sector will make investments less risky in the short-run. On the adaptation side, our National Oceanic and Atmospheric Administration is helping India’s Ministry of Earth Sciences to more accurately forecast monsoons, and thereby reduce risks associated with climate change and to protect people and crops from the adverse effects of extreme weather.

Agriculture, Science and Technology
Just as a new green initiative in clean and renewable energy can benefit both our countries in the years ahead, so too can renewed cooperation in agriculture contribute to a second green revolution in Indian food production. And just as the United States was proud to play a role in the first green revolution, through the good work of the late Norman Borlaug and many committed Indians and Americans, so too are we ready to join our Indian partners to help expand India’s agricultural sector for a new era.
Secretary Vilsack and his counterpart Dr. Montek Singh Ahluwalia will meet next week to discuss the future launch of a ministerial-level Agriculture Dialogue, which will include a strong private sector component. On a global level, we see India as an important partner in helping to spur agricultural revolutions beyond South Asia to Africa and other parts of the world where food security remains a serious and persistent problem.
Our long-standing scientific collaboration extends beyond agriculture to other areas such as health, where our best scientists, innovators, and labs are coming together to share knowledge and find breakthroughs on some of our toughest challenges. We’re working together in a number of areas, including research in HIV/AIDs, detection of emerging infectious diseases, and maternal and child health. Such initiatives are critical to saving lives and resources, and strengthening human development in India, which brings me to the fifth and final area of cooperation that I’ll highlight today.
Education and Human Development
Education and human development, including women’s empowerment, are important platforms for both our countries to invest in our greatest asset – our people. In the 1960s, educators and institution builders from our two countries collaborated in the establishment of the Indian Institutes of Technology. Today, Indian leaders are once again grappling with how to best position their university system to prepare an ambitious workforce for the demands of a changing global economy. We are hopeful that part of the Indian education system’s evolution will bring about closer collaboration with American universities.
We welcomed Indian Education Minister Kapil Sibal’s visit to a number of top U.S. universities last month. As a reflection of Indian interest in further cooperation between our institutions, over 30 Indian university leaders accompanied the Minister. There is equal, enthusiastic interest among American university leaders in establishing lasting university-to-university partnerships. The U.S. and Indian governments have tried to do their part, too. We nearly doubled the Fulbright-Nehru program of academic exchanges this past year, and hope to expand opportunities in higher education in the near future.
Of course, we’re committed to working with India to improve all levels of education, to boost literacy and expand vocational training. I had the privilege last summer in Mumbai to visit a visionary NGO involved in this work, Teach for India, and I found a spirit of volunteerism that underpins much of the incredible social work that goes on around the country. It was a further reminder that both our relationship and India’s progress are rooted in the dynamism of the Indian people.
Our programs pay particular attention to women. The United States can learn a great deal from India’s examples of a woman president, a woman leader of the nation’s largest political party, and more women in parliament than ever before. Beyond politics, women are making important contributions to all areas of human endeavor, from education to the arts to science and technology. But more work needs to be done to empower the disenfranchised and the marginalized. Our Ambassador-at-large for Global Women’s Issues, Melanne Verveer, was in India last week to launch our dialogue on Women’s Empowerment, and I know she found her engagement with entrepreneurs, activists, educators and policymakers quite productive.
Conclusion
From counterterrorism to nonproliferation, education and agriculture, science and technology and women’s empowerment, our cooperation reflects the depth and breadth of the relationship between the world’s two largest democracies. It also illustrates the deep connections not just between our governments, but more importantly, between our societies and our people.
Let me conclude with a simple observation. Few relationships around the world matter more to our collective future, or hold greater promise for constructive action on the challenges that matter most to all of us, than the partnership between the United States and India. That doesn’t mean that we will always agree, because we won’t. That doesn’t mean that we can always avoid mutual suspicions or misunderstandings, because we can’t. But together we can build, on the solid foundation that already exists, an even stronger partnership that serves not only the interests of our two countries, but of the rest of the international community.
That is the sense of possibility that awaits Prime Minister Singh in Washington next week. And that is the sense of possibility that the Obama Administration is determined to make an enduring reality in the new era unfolding before us.