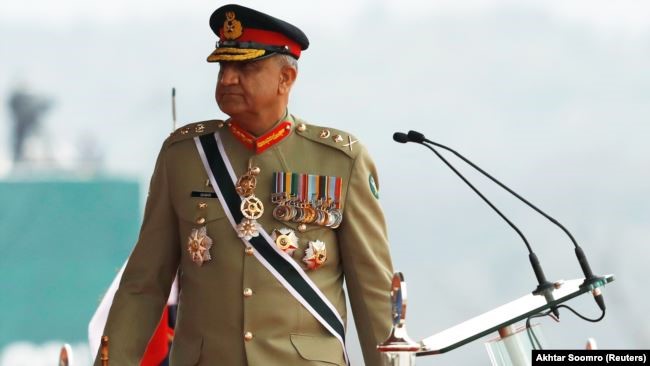 Pakistani opposition parties have mounted the most significant challenge in years to the country’s all-powerful military, publicly calling out the institution for its alleged meddling in politics. It’s a red line that few have dared to cross.

The Pakistan Democratic Movement (PDM), a newly formed alliance of 11 opposition parties, has accused the army chief of engineering the ouster of former Prime Minister Nawaz Sharif. It is demanding the removal of his successor, Imran Khan, who is closely aligned with the army.

The allegations are unprecedented in Pakistan, where the army has directly or indirectly ruled for most of the country’s 73-year history and has staged three coups.

The allegations are unprecedented in Pakistan, where the army has directly or indirectly ruled for most of the country’s 73-year history and has staged three coups. Pakistan’s military maintains a chokehold on domestic and foreign affairs in the South Asian nation of about 220 million.

The PDM has staged large rallies in two major Pakistani cities during the past week, attracting tens of thousands of demonstrators. The movement has vowed to continue protests until its demands are met.

Experts say opposition leaders have been emboldened by rising public discontent over the deteriorating economy and by rare divisions within the army.

The military has remained silent in the wake of the opposition rallies while Khan’s government has arrested an opposition leader and piled pressure on local officials to detain protest organizers.

“The army will respond the way it is used to — by using force,” says Ayesha Siddiqa, a Pakistani author and expert on the country’s military.

“It’s not going to be an easy run for the opposition,” Siddiqa says. “This is a longer-term battle that will likely drag on for months. Much will depend on how cohesive the opposition is in consistently striking at the hybrid regime.”

Criticizing Pakistan’s military has long been taboo. For decades, the military and its intelligence services have been accused of silencing opposition through intimidation, censorship, and even assassinations.
But the PDM leapt into uncharted territory with its direct attacks against the army.

The exiled Sharif, one of the leaders of the PDM, accused army chief General Qamar Javed Bajwa of rigging the 2018 elections and orchestrating his ouster in 2017 when the Supreme Court disqualified him from office over corruption charges.

Pakistan’s military maintains a chokehold on domestic and foreign affairs in the South Asian nation of about 220 million.

Sharif, who was sentenced to seven years in prison, denies wrongdoing and says the charges were fabricated.

The army fell out with Sharif when, as prime minister, he attempted to curb the military’s traditional dominance over politics.

“You, Mr Qamar Bajwa, forced our fully functioning government out of power and sacrificed the country and the nation at the altar of your ambitions,” Sharif said on October 16.

He made the remarks via video link to a mass demonstration in Gujranwala, a city in the eastern province of Punjab that is a stronghold for Sharif’s Pakistan Muslim League–Nawaz (PML-N).

“You bought and sold loyalties of the parliamentarians,” Sharif said from London where he has lived since his release from prison earlier this year for medical treatment. “You forced judges to ink verdicts. Mr. Bajwa, you will have to answer for this.”

Sharif is already facing sedition charges over his criticism of the military’s role in politics. But experts say his latest criticism has crossed a new line.

“This is the first time that a mainstream Punjabi leader has spoken against, or even about, how the military leadership exploits the people, exploits politics, and hijacks politics,” says Siddiqa, author of the book Military Inc: Inside Pakistan’s Military Economy.

Punjab is the largest and richest of Pakistan’s four provinces. It is home to about 60 percent of Pakistan’s population and is the wealthy industrial and agricultural heartland of the country.

Significantly, most of the military’s rank-and-file also comes from Punjab Province.

Khan denies that the army helped him come to power. He has defended the military and threatened a new crackdown on the opposition’s critical leaders.

Opposition leader Muhammad Safdar, a member of the PML-N and the son-in-law of Sharif, was arrested on October 19 following a protest in Karachi — the capital of the southern province of Sindh.

His arrest came a day after Safdar led a crowd in chanting “Give respect to the vote!” — a slogan that is viewed as criticism of the military.

He made the remarks during a visit to the mausoleum of the founder of Pakistan, Muhammad Ali Jinnah.

Police said an initial report was registered against Safdar that accuses him of violating the sanctity of the mausoleum.

Officials in Sindh have also alleged that the province’s top police official, Mushtaq Ahmed Mahar, was abducted on October 19 by paramilitary troops who forced him to sign an order for the arrest of Safdar.

Authorities in Sindh said they had not ordered Safdar’s arrest and that police had been pressured into taking the action.

Bilawal Bhutto Zardari, leader of the opposition Pakistan People’s Party that is in power in Sindh Province, has called for the army and intelligence chiefs to investigate the matter. Zardari says the incident had gone too far.

Michael Kugelman, South Asia senior associate at the Woodrow Wilson International Center for Scholars in Washington, says the big question looking ahead is whether the Pakistani state will continue to give protesters space, or if it begins to crack down.

“If it opts for crackdowns, that could fire up the movement even more,” Kugelman says. “In this regard, it’s worth watching to see if the protestors scale up the anti-establishment messaging, or if they largely keep it grounded in populist and politically safer terms of trying times for the masses because of economic stress. Crackdowns are less likely if the protestors emphasize the latter.”

‘Not On The Same Page’

The opposition protest movement entered the scene amid growing discontent with Khan and his supporters in the military.

Under Khan, the military’s influence has become more overt, with former army officials taking over key government positions.

During Khan’s two years as prime minister, there also has been mounting censorship and crackdowns against dissent, critics, and opposition leaders.

Khan has also been criticized for his handling of Pakistan’s faltering economy, which was in crisis even before the coronavirus pandemic.

“Alarming rises in food prices and broader inflation are angering the masses and giving protest leaders something powerful to exploit and use for mobilization purposes,” Kugelman says.

“In the coming weeks, with the weather getting colder and many Pakistanis struggling to pay heating costs, anxieties could rise even more,” he says.
Experts say the opposition is also trying to seize on divisions with Pakistan’s army.

“The military is not on the same page as far as how its future is being planned,” Siddiqa says.

She notes the controversial extension of Bajwa’s term in January by three years and the army’s plan to install Lieutenant General Faiz Hameed, the current ISI chief, as Bajwa’s successor.

“This is one of the reasons that the opposition has found it opportune to strike,” Siddiqa explains.

The PDM has vowed to stage more protests across Pakistan to turn up the pressure on authorities.

Kugelman says he envisions two possible scenarios: “either some major change in leadership at the top, or, more likely, some type of deal between the opposition and the military that enables each side to claim victory.”

The opposition movement also could simply “lose steam, and nothing changes,” Kugelman says. “But I don’t anticipate a loss of momentum for the protests any time soon.”

By  Frud Bezhan
The writer  is a correspondent for RFE/RL https://gandhara.rferl.org/a/pakistan-s-powerful-military-faces-biggest-challenge-in-years/30909240.html