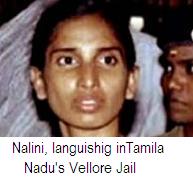 Nalini, serving a life term in the Rajiv Gandhi assassination case, will not get a remission of her sentence, though Sonia Gandhi and her daughter Priyanka Gandhi have favored at least a reduction in the term.

The Tamilnadu government made this clear before the Madras High Court on Monday, March 29.

The state’s advocate general told a division bench that the government had rejected on March 24 the plea of Nalini for a premature release. This was for the second time Nalini’s request for early release has been rejected

The Prison Advisory Board, constituted by the government to consider Nalini’s representation, has rejected her plea on eight grounds and the state government has accepted the recommendation, advocate general, P S Raman told the division bench comprising Justices Elipe Dharma Rao and K. K. Sashidaran.

Nalini was sentenced to death by a special court along with 25 others in January 1998 and the Supreme Court had confirmed the capital punishment for her and three others.

However, entertaining a clemency petition, the state government commuted her death penalty to life on April 24, 2000.

Priyanka Gandhi met Nalini at the  Vellore jail, where she is held, last year.