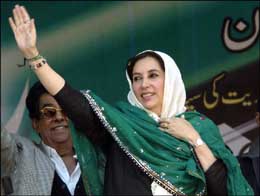 As Pervez Musharraf, the highly opinionated military dictator of yester years, is cooling his heels in the snow storms hit London, one thought is upper most in his mind. And it is how to bounce back on the centre stage at home and how to get a good epitaph ready in time. Such thoughts are normal to self-anointed rulers from Zimbabwe to Burma. Generally, Generals have a short shelf-live. Second innings is rare but Musharraf wants to be that rare exception. Whether he will succeed or not is something 2011 will tell us.

At the dawn of the New Year, this much be can be said without fear of contradiction that this Mohajir, who was given to the tendencies of a bull in a china shop, will be remembered by posterity. All because of a gift he had bestowed on Pakistan, though inadvertently. If his worthy predecessor Zia-ul-Haq’s contribution was Shariaisation of Pakistan, his free gift was activist judiciary. But for Musharraf, Pakistan could not have reinvented the long forgotten judicial wheel.

Iftikhar Muhammad Chaudhry was a part of the Pakistani judicial system that had the temerity to come up with justification for the most indefensible over the years. The doctrine of necessity was one such award delivered by the apex court. A decade ago, no one had imagined that the very judiciary could be rewriting history of the country with its ‘Mission Clean –up’.

What is gratifying is that judicial activism has not remained a flash in the pan, and for the third year in a row, it has remained committed to putting the fear of god in lawmakers with fake bachelor’s degrees (again a Musharraf gift- he had decreed that a law maker must be a graduate), and pursuing vigorously the missing persons’ case. Well, the missing persons were a Musharraf creation as he went on obliging his American buddies on the al Qaeda trail, and helped his Sancho Panzas to indulge in some abracadabra in Balochistan and NWFP. To his discomfort, they ended up as his nemesis and placed him in direct confrontation with an uncharismatic Ifthikar Chaudhry, who led the march of the nation against the Khakis.

Like Musharraf, his successor at the Presidential Palace, the Mr. Five Percent, has contributed to strengthening the judicial edifice, yes, unwittingly. Because of Asif Zardari, the Supreme Court has found itself in a new avatar – of crusader against graft. Interestingly, the Zardari government has not observed the International anti-Corruption Day even once in the three years it has been in power.

The Chaudhry Court not only recovered some of the looted money but also exposed the villains, who were making their homes shine even as the homes of average citizens are denied power and gas for close to 15- hours at times. The brew that cheers them has no sweetener since the sugar price has gone through the roof because of bungling bureaucracy and political bosses.

List of mega scam cases taken up by the apex court is long, money involved is huge at over (Pakistani Rupees) 400 billion and personalities exposed are truly colourful not merely because of the colour of their clothes and caps but because of their direct linkages with the ruling peers. Topping the list are friends of the President, like Ahmad Riaz Sheikh, who had the privilege of sharing the Zardari cell in a Musharraf jail; Riaz had been rewarded with the post of additional DG, FIA (Economic Crime Wing).

Premier Gilani emulated his leader and made his ‘cell-mate’ Adnan A Khawaja the managing director of government’s milch cow – the Oil and Gas Development Corporation (OGDCL). Today he stands convicted and sacked from his job, courtesy the activist bench. Others who faced the Chaudhry firing squad were also from the Multan (Gilani’s) gang – Religious Affairs Minister Hamid Saeed Kazmi, his Secretary Afga Sarwer Qazalbash, and former Haj Director General Rao Shakil. The last word on the Haj scam is yet to be heard. And when it comes, the Saudis too may squirm as the focus has shifted for the first time to the flip-side of arrangements in the Holy City.

Judicial wrath has fallen on PPP leader turned Attorney General, Sardar Latif Khosa, Prosecutor General Irfan Qadir, and acting chairman of national accountability bureau (NAB), Javed Zia Qazi. NAB was a creation of General Musharraf as the weapon to selectively target the corrupt amongst his interlocutors. NAB Chairman Naveed Ahsan, its prosecutor general Danishwar Malik and additional prosecutor General Abdul Baseer Quershi also exited on the directives of the Supreme Court. A beneficiary of PPP largesse, Ayaz Khan Niazi, was swept aside by the judicial broom as he institutionalised corruption at the National Insurance Company Limited (NICL) as its head.

A Rs. 22 billion scam in Pakistan Steel Mills and a Rs. 9 crore scam in the Bank of Punjab were not small change; the dogged pursuit of the bench has brought out skeletons after skeletons, and claimed several heads. The trail in most of these cases led to the door of Zardari house. Logically, the court should have indicted the President and his government in that order, which could have meant end of Zardari Darbar. Surprisingly, the superior court did not walk its own talk. It, however, rewarded the opposition with a talking point by pointing the needle towards Zardari’s shelter under the National Reconciliation Ordinance.

Suo Motto the CJP stepped into a scheduled sale of 240 acres of land with the Evacuee Trust Property Board and stalled it. There were many more such cases like the Punjab Land Allotment scam, New Murree Project, and the ‘Roll Call’ of loan defaulters (since 1972) made the high and mighty of the political and military spectrum to run for cover through out 2010. Lawyers and judges and politicians who had played ball with President Musharraf were expectedly at the receiving end. One of these victims was law minister Babar Awan, who worked overtime to buy judicial survival kit for Gen Musharraf. .

Justice Jawad S Khawaja and Justice Khalilur Rehman Ramday at the apex court and a section of judges at the Lahore and Sindh High Courts have acted as perfect foil to CJP Chaudhry and brought smile to the average Pakistani. Justice Khalil-ur-Rehman Ramday’s comments were acerbic at times, like, for instance, when the case of a sweeper from Punjab came before him.

‘Is the Punjab government left nothing to do but pursue a poor sweeper’, he asked, as Advocate Salma submitted that her client, Riaz Masih, served as a sweeper for 20-years in a government library and yet was sacked in September 2006 owing to a short absence from duty. The judge converted the sack order into compulsory retirement.

Superior judiciary is aware of what has been afflicting the judiciary and police at the cutting edge of criminal justice system. Weak and often half-hearted investigations and absence of protection to witnesses as also judges are responsible for case pile-up as well as ‘speedy’ acquittals. So the message from the bench to the police is simple and clear: ‘Buckle up. Do your job’.

Elaborating on the theme, CJP Chaudhry told the police as recently as Dec 27, that weak probe and not courts were to be blamed for the acquittals. ‘We do not want to award unnecessary punishments but police failure in producing evidences against accused persons compels us to release them unpunished,’ he observed while expressing displeasure over the delay in wrapping up investigations into a grenade attack on a Taxila church in 2002. Four women were killed and 25 people injured in the attack. His advice: police must adopt modern techniques of investigation.

2011 will show whether the police have paid heed to the Chaudhry advice. Whether the police listen to him or whether the political class mends its ways, one this is clear: the voice of judiciary will be heard more stridently as the country hurtles ahead with the lame duck PPP government limping through the reminder of its term. And history will acknowledge Musharraf, Zardari and Iftikhar Chaudhary as the ‘co-authors’ of modern Pakistan history.