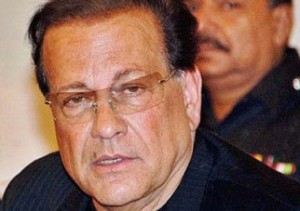 Pakistan’s religious extremism has claimed a liberal’s life on January 4. The assassination of Punjab governor –a self-confessed Benazir Bhutto loyalist and a former classmate of Nawaz Sharif – Salmaan Taseer in broad day light in the heart of Islamabad’s posh Koshar Market is as much a shot in the air to keep the dwindling tribe of secularists at bay as a signal to the West not to put pressure on Pak army for action in the border belt with Afghanistan.

‘Religion is in danger’ has been the war cry in Pakistan every time Rawalpindi and Islamabad come directly under Washington’s pressure. Aasia Bibis of Pakistan have given the perfect ruse in the past as now.

Only on Dec 31, as the world was bidding good-bye to 2010, vigilante extremists, religious parties and groups and the Islamists poured into the streets holding aloft the banner that read ‘We sacrifice our lives, we will save the sanctity of the prophet’.

The assassin of the 46-year-old Taseer was his own security guard from the Elite Force of Punjab Police. The guard, Mumtaz Qadri, shot at him at least nine times in the neck and chest from close range. Police quickly arrested Qadri; some reports said he had surrendered after his shooting spree, which left five other persons injured. Eye witness account said the governor was shot dead as he was leaving his vehicle; he fell down and died.

Taseer had been in the news for all the wrong reasons in recent weeks- first for his unscheduled and unacknowledged visit to Colombo as a player on the local stock exchange soon after the visit of President Asif Ali Zardari to Sri Lanka, second with a visit to Dubai which has emerged as the political capital of Pakistan, and third by adopting an adversarial role vis-à-vis PML (N) government in Lahore.

More than these spats and spites, what pushed Taseer into the firing line was his open and unreserved support to Aasia Bibi, a Christian woman, who has been convicted of blasphemy. The 45-year-old mother of a 10-year-old daughter was given the death sentence in a Nankana Sahib district court of Punjab on November 9, 2010, on charges of committing blasphemy. A local cleric, Qari Saleem, had dragged her to the court alleging that she had passed derogatory remarks against the prophet.

Governor Salmaan Taseer went to Sheikhupura Jail, where she was lodged, on Saturday Nov 20, heard her patiently and addressed a press conference with the lady in distress sitting beside him. In front of the media, she put her thumb impression on a mercy petition and the governor assured her of taking of her plea to President Asif Ali Zardari. And he appeared to have succeeded in his mission. Till the religious groups sounded the bugle and decibel level drowned sanity and Fazl-ul-Rehmans upped the ante and ‘deserted’ the ruling coalition.

Beleaguered Zardari did what he is always best at. He rolled back his plans of pardon; and as misgovernance appeared as his albatross, pushed his dapper Prime Minister Gilani to face the cross. Directly from the Presidential office and house and from the Minister for Religious Affairs, Islamic parties were assured that the government would not dilute the blasphemy laws that belonged to Zia era of Shariaisation of Pakistan.

And the People’s Party of Pakistan, whose creed is liberal, secular, left of centre politics, quickly distanced from the amendment moved by veteran parliamentarian and a former party spokesperson, Sherry Rehman. “The government has no plans to remove the blasphemy laws … to ensure respect of the Holy Prophet is part of our faith,” said Kursheed Shah, the minister for religious affairs. He quietly glossed over President Zardari’s publicly stated intentions to pardon Aasia Bibi and to amend the Blasphemy law. In fact, Minister for Minorities Shabahz Bhatti was engaged in drafting the changes the President himself had suggested.

What else made Taseer emerge as the target of religious extremists is unclear. Because, in the past couple of days he had been active in fire fighting to save the Gilani government. He had turned on all his charms to win over chief minister Shahbaz Sharif and re-activated the back channels with London based MQM supremo Altaf Hussain.

The talk of political instability at the federal level has pushed to the back burner the Governor-chief minister row and the resolution against Governor Taseer moved by the PML-N member Dr Yasmin in Punjab assembly. The resolution said Governor Taseer went abroad without notifying the government, due to which his office remained vacant for several days, which was unconstitutional. ‘Since Governor Taseer was guilty of violating the Constitution, the President should dismiss him forthwith ‘, it said

Salmaan Taseer was the 26th governor of Punjab. He was sworn in as the constitutional head of the most important province on May 15, 2008. The gubernatorial post was a reward for his loyalty to the First family of Pakistan. Then President Pervez Musharraf made the appointment at the request of the PPP leadership.

Taseer started his political career in his student days after he came under the spell of charismatic Zulfiqar Ali Bhutto, the founder of Pakistan Peoples Party (PPP) in the late 1960s. He authored a political biography on Bhutto titled Bhutto: A political biography (1980).

Taseer dabbled in business through a string of chartered accountancy firms and the First Capital Securities Corporation (FCSC), a full service brokerage house with equity participation by Smith Barney Inc USA and HG Asia Hong Kong. He founded the Worldcall group with a payphone network in 1995. The group has since become a major telecom operator. His other business interests include an English news channel, a children’s channel, and English language Daily Times.

He made his electoral debut in 1988 and was elected to the Punjab Assembly from Lahore. In 2007, he joined the caretaker cabinet of Prime Minister Muhammad Mian Soomro as Minister for Industries, Production and Special Initiatives.

Taseer’s assassination came a day after Karachi was rocked with five politically motivated killings which local media terms as targetted killings by armed gangs controlling the commercial capital of Pakistan. After one of these shootings, angry crowds took to the streets and set fire to two buses, and a hotel. In Peshawar, militants used a remote-control device to detonate a bomb that destroyed a NATO oil tanker truck on the highway to Afghanistan.

There is no magic wand that could undo the damage inflicted on the Pakistani society with space shrinking for traditional Bhuttoites like Sherry Rehmans. The brutal killing of Taseer will make the spineless PPP leaders to more openly toe the Islamists for sheer survival even as they agree that Pakistan’s blasphemy laws and rules are cruel, unfair and open to abuse. Unlike in Pakistan, most Muslim countries, Indonesia including, deal with blasphemy under normal laws, which are mild.

Thirteen years ago, Bishop John Joseph of Faisalabad shot himself dead on the steps of the Sahiwal district court protesting at the abuse of blasphemy laws. Little has changed since then. No body has dared to change the Section 295-C of the Pakistan penal code which was introduced by Gen Zia-ul Haq as the most deadly weapon in the hands of the State and its lackeys against blasphemy. Yes, there were no official executions for blasphemy in Pakistan either under Gen Zia or his successors, but at least 30 persons have become a prey to the arbitrary actions of vigilante extremists.

The law requires no evidence other than an accusation made by anyone even when living hundreds of miles from the alleged scene of Blasphemy. The Aasia Bibi case bears this out. The cleric, who had invoked the Blasphemy laws against her, was not an eye witness to the derogatory remarks Bibi allegedly made against the Prophet during a brawl in her village. The argument itself was the off-shoot of a refusal by two women to drink water from a glass Aasia Bibi had touched because, according to them, it had been defiled due to her faith and caste.

The politicization of Aasia Bibi’s trauma and Taseer’s assassination will mark requiem for Benazir’s dreams of reconciliation and religious harmony in her country. In her book ‘Reconciliation: Islam, Democracy and the West’, which was published posthumously, Benazir said Pakistan had become ‘the most dangerous’ place, and it faced increasing threats of ‘both Talibanisation and Balkanization’.

Sadly, the government headed by her husband, Asif Ali Zardari is ill-equipped to meet the challenge from the forces of Talibanisation. He is also unmindful of the Jinnah legacy and the visions of his wife. He is the proverbial Mr five percent, ever willing to live with and do business with the Islamists.

Will he survive and if so for how long.

Lahore, Rawalpindi, Karachi and Washington hold the key, though not necessarily in that order.