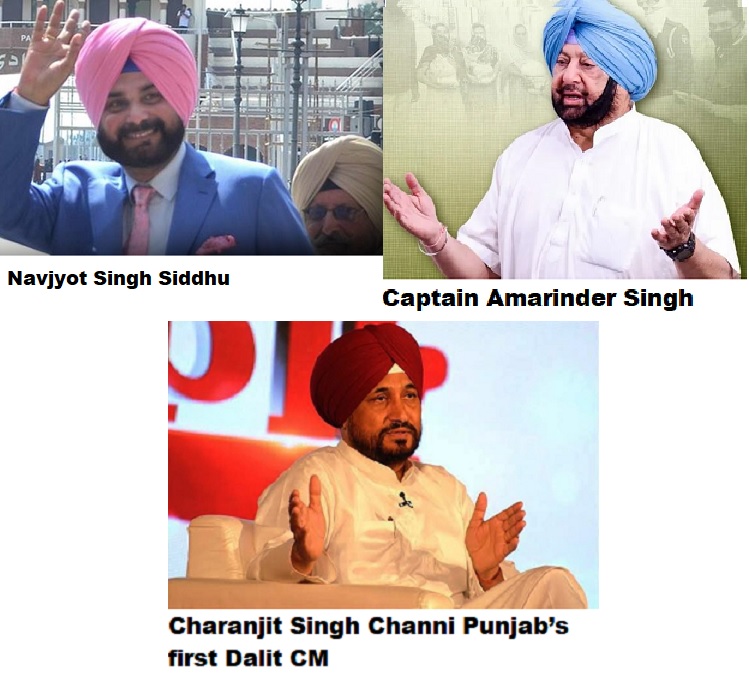 Navjot Singh Sidhu, who as former Indian opening batsman knew where his off stump is, succeeded in hitting his rival, Chief Minister Capt. Amrinder Singh, out of the ground in Punjab. But now he must brace himself up for a tough test in the weeks ahead.

He has backed Charanjit Singh Channi, a Dalit, to replace the former ‘Fauji’ as the chief minister. The retired Captain of the Indian Army who saw action during the 1971 Bangladesh war already looked bruised before he was declared out. But his wounds would heel while the new chief minister struggles to prove himself in the short time before the state assembly polls early next year.

Amrinder Singh spoke of many ‘options’ that he may explore to keep his political innings going. But his joining, say the BJP, may be good optics but no guarantor of polls success. Another option: Joining the AAP. Will the AAP welcome him effusively? Won’t his entry upset the old AAP members, many of whom nursing high ambitions which will surely be curbed with the entry of the Captain.

Many Congress MLAs in the state have alleged that Amrinder Singh was a secret friend of the Akali Dal. Assuming for a minute that to be correct, any idea of his joining the Akali Dal sounds preposterous when the Parkash Singh Badal will make sure that nobody outside their family gets a prominent role in state politics.

Finally, floating a party of his own may appeal to Amrinder Singh but he may be hamstrung by lack of resources, despite being a former Maharaja of one of the biggest princely states of pre-Independence India. His PR is not good enough to win followers in hoards and build a party edifice in the short time before the polls are held.

The Congress will be entering the polls in Punjab with some disadvantages, topping with the ‘anti-incumbency’ factor but also the fact of being a divided house. The Captain and Sidhu differences were visible publicly almost two years ago. It has left a rift that by no means can be said to have disappeared.

Disenchantment among Congress legislators with the former chief minister had spread quickly when he was found wanting on some of the crucial promises made at the time of the last state assembly polls in 2017. He was accused of being inaccessible to party MLAs and running the government with the help of bureaucrats.

The failures his detractors have catalogued relate to not only matters like jobs and farmers’ woes but more sensitive ones like no action against the previous Akali Dal rulers for their failure to curb drug trafficking and punishing those who allegedly were responsible for an act of sacrilege of the holy Granth Saheb.

His inaction on drug trafficking was mystifying when he himself, as an Opposition, leader had accused the then Akali Dal-BJP government of not doing anything about a menace that was running the lives of the youth in Punjab.

Coming days will tell how the new chief minister will deal with the issues left unsolved by the Captain. But the question is, will he have sufficient time to do so when his more immediate problem will be not only quelling dissent within the Punjab Congress but oiling the party machine for retaining power for a second consecutive five -year term.

Channi may, however, expect Sidhu to primarily take on the onerous task of ensuring another victory for the Congress. Sidhu may not have staked his claim for the chief minister post but he cannot be said to have given up hopes to be chief minister. He remains the state party chief, reportedly appointed by Rahul Gandhi on recommendations from his sister Priyanka Gandi Vadra. That makes Sidhu’s position not only secure but puts more responsibility on him to essay another Congress win next year.

Amrinder Singh has enlisted several flaws in the political personality of Sidhu—incompetent and danger to the nation for his alleged closeness to the Pakistani establishment et al. Incidentally, at one time even Amrinder Singh was accused by his critics of being friends with a Pakistani journalist. These are ‘routine’ kind of allegations made by detractors. Sidhu is not the chief minister but even as the PCC head his mettle as a poll winner will be tested now that he has vanquished his adversary.

Amrinder Singh will surely have some sympathisers in the Congress who share his sense of ‘humiliation’ by the Congress high command.  The names that were doing the rounds as the replacement of Amrinder Singh but missed the boat are not going to be quite for long.

As a Dalit leader Channi will be expected to play an important role in the assembly poll campaign. Working in tandem with Sidhu, a Jat, he can theoretically swing the electorate in their party’s favour. If the two of them succeed at the battle of the ballot they will be bucking the trend of Punjab being alternatively ruled by the Congress and the Akali-BJP combine.

The Akali-BJP alliance has been snapped but it remains to be seen how it helps the Congress. There is a new entrant in the Punjab political arena—the Aam Admi Party. It made an impressive debut in 2017 polls, sending 16 members to the 117-member state assembly to emerge as the second largest party, claiming the leader of the Opposition post.

AAP is believed to have been wooing the Dalits in the state and is even hopeful that the majority will flock to the party instead of going over to the BSP, a party founded by a Punjabi Dalit Kanshi Ram. BSP has formed an alliance with the Akali Dal which draws the bulk of its support from the Jat community. Channi and Sidhu may have to struggle to garner the majority votes of the Dalits, the largest community in the state–30 per cent (followed by Jats who constitute 25 per cent population in Punjab).

An interesting four-corner state assembly polls in Punjab at this stage appears certain, making predictions more difficult than they would have been had it been the usual two-way contest between the Congress and the Akali Dal-BJP combine.

The stakes are high for the Congress which will be judging the efficacy of the ‘masterstroke’ of changeover in Punjab and the air of optimism that has followed. The electoral challenge before two other contestants—the Akali Dal-BSP combo and the AAP—will be equally tough because of the likely split in votes of the Dalits and Jats.

Contrary to the trends in the rest of the country, the BJP doesn’t look a formidable force in Punjab. Not only the farmers (mostly Jats and Dalits) are angry with the saffron party but without the Akalis as partners, the BJP support base will be confined to urban Hindu voters. In what manner a weak BJP base in the state helps the Congress remains to be seen.  (<)