China’s economic stakes in Sri Lanka are in focus as the bankrupt South Asian nation scrapes the last of its usable foreign reserves, his despatch from Bangkok pointed out.   By late April those funds had shrunk to $50 million, a government minister revealed to parliament in a rare moment of candour.

The admission by then Finance Minister Ali Sabry inadvertently exposed the strings attached to a Chinese financial lifeline the government of ultranationalist President Gotabaya Rajapaksa had hitherto concealed to boost the official reserve figures, which were hovering over $1.5 billion during the first quarter of this year.

Nearly all of that was thanks to a hefty $1.5 billion swap by the People’s Bank of China. But Sabry’s revelation confirmed what had been whispered within private banking circles in Colombo, the commercial capital: Sri Lanka cannot readily dip into the Chinese cash to pay for desperately needed food, fuel and medicines, or even to settle its maturing foreign debts.

This week, though, China lost a man regarded as its closest ally among the Rajapaksas, Sri Lanka’s most influential political clan. Prime Minister Mahinda Rajapaksa, elder brother of Gotabaya and a former president himself, resigned on Monday amid daily public protests against the duo. It was a dramatic turn after a violent day marked by pro-government goons attacking the protesters. 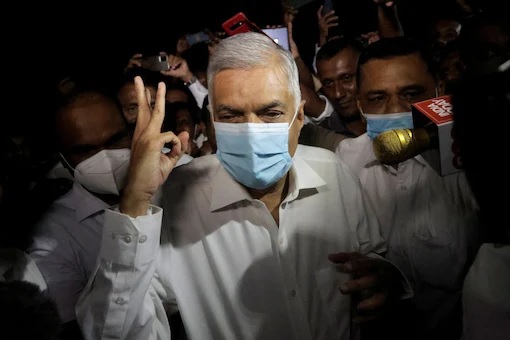 On Thursday evening, perceived Rajapaksa ally and five-time Prime Minister Ranil Wickremesinghe was appointed back to the post, replacing Mahinda.

Here are five things you need to know about China’s economic interests in Sri Lanka.

What is China’s role in Sri Lanka’s $81 billion economy?

Sri Lanka’s tilt toward a pro-Beijing foreign policy during Mahinda’s second term as president, from 2010 to 2015, paved the way for China’s rise as the island’s leading banker and builder. Over $5 billion in Chinese loans fueled an infrastructure boom after a nearly 30-year civil war ended on Mahinda’s watch. Some of the new landmarks were in southern Sri Lanka, the Rajapaksa clan’s traditional bailiwick, ranging from a new port to an airport and broad highways that cut across the rural hinterland.

China had been a key weapons supplier to Colombo as the final years of the war intensified under Mahinda, with Chinese arms sales rising to $1.8 billion.

Beijing’s financial tap, with few conditions on transparency and accountability as Rajapaksa confidants have admitted, enabled China to edge out Japan, for decades Sri Lanka’s leading development partner, and India.

China has also invested $1.4 billion in Belt and Road money in what is to be a modern business hub on reclaimed land off Colombo’s coast. Like the currency swap, this has given Beijing sway over its strategic Indian Ocean asset. The business development is to complement China’s multimillion-dollar stake in the nearby Colombo port, the country’s busiest harbour.

How do Chinese loans compare with others?

By 2020, Sri Lanka’s inability to honor maturing external debts was looming. The International Monetary Fund put the island’s foreign debt at $38.6 billion, or 47.6% of the central government’s total debt. China’s slice was 10%, as was Japan’s, placing the leading bilateral lenders after the main foreign creditors, international sovereign bondholders and the Asian Development Bank.

But the cost of borrowing from China set that debt apart. Numbers crunched by Verite Research, a Colombo-based think tank, show that the interest rates on Chinese loans averaged 3.3%, versus 0.7% for Japan’s. And the maturity period averaged 18 years for Chinese debt, shorter than India’s 24 years and Japan’s 34 years.

None of this hindered the Rajapaksas’ appetite for Chinese credit, opening the door for the Asian powerhouse to fund over a third of 313 debt-funded projects in post-conflict Sri Lanka.

China’s deep pockets enabled it to come to Sri Lanka’s rescue when Colombo needed to raise commercial loans, pushing aside the IMF as the traditional lender of last resort. By 2018, the Chinese cash flow was even tapped by the pro-Western coalition government that succeeded Mahinda’s second term as president, with Wickremesinghe as premier. The China Development Bank offered a $1 billion syndicated loan on terms that Colombo found more attractive than competing bids from Western-leaning international banks: an eight-year maturity period, with a three-year grace period, at 5.25% interest.

Thereafter, China wanted to tip the scales further with an offer to buy an entire $1 billion sovereign bond issue. But the Sri Lankan government declined, preferring to go to the international capital markets “in the interest of diversity” to limit the country’s exposure to Chinese creditors, a commercial banking source revealed to Nikkei Asia.

Yet the impact of COVID-19 in 2020 saw the Rajapaksas, back in power, turn to Chinese creditors for more syndicated loans. In April 2021, the China Development Bank approved a $500 million loan, the second tranche of a $1 billion bailout that Colombo had sought from Beijing in early 2020, as the economic pain from the pandemic spread.

The second tranche came with a maturity period of 10 years and a grace period of three.

How has Beijing responded to Sri Lanka’s crisis?

Earlier this year, with Sri Lanka having to pay off foreign debt of $6.9 billion, President Gotabaya and Prime Minister Mahinda sought financial relief from Beijing, asking that the debt payments maturing in 2022 be restructured. The amounts owed to Chinese creditors included $119 million to the China Development Bank Corporation, $232 million to the China Development Bank and $232 million to the Export-Import Bank of China, according to estimates by the Advocata Institute, another Colombo-based think tank.

But Beijing responded with a dose of tough love to its pro-China Sri Lankan allies. In April, after Sri Lanka decided to default on its foreign payments — a first for the country — and seek an IMF bailout, Beijing grumbled. “China has done its best to help Sri Lanka not to default but sadly they went to the IMF and decided to default,” Qi Zhenhong, the Chinese ambassador in Sri Lanka, told reporters.

Later, China appeared lukewarm to Colombo’s plans to restructure its debts with all its creditors, suggesting it would offer Sri Lanka a new loan to settle existing debt. The two countries have been in talks for months on a $1.5 billion credit line and $1 billion syndicated loan. China’s position threatens to scupper plans by Sri Lanka’s central bank to treat all creditors equally about an inevitable haircut during its debt restructuring negotiations at the IMF.

What are the implications for other countries indebted to China?

Beijing’s detractors in the West and in India have scrutinized the Chinese lending that has underwritten Sri Lanka’s post-conflict growth. The China-funded Hambantota Port in the south has been painted as the poster child of Beijing’s “debt-trap diplomacy.”

Now, in capitals across small Southeast and South Asian nations where Chinese loans have also poured in, officials are following how China handles Sri Lanka’s economic woes. Beijing’s debt map spans Cambodia, Laos and Myanmar to the Maldives and Nepal.

As one senior Southeast Asian government official put it, “All eyes will be on the Chinese haircut or if Beijing will balk and worsen the situation for Sri Lanka.” (Courtesy: Nikkei Asia Free article)