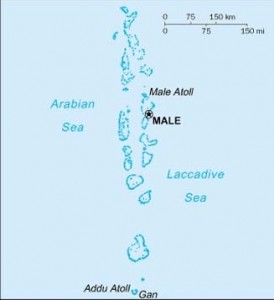 Maldives President Mohamed Nasheed’s decision to accept a request from the Obama administration to re-settle in his country two terrorism suspects from the Guantanamo Bay has regional security implications, says a POREG report .

Though President Nasheed said there was “no harm” in the offer and that it would not violate any laws. He also claimed that most of the detainees at Guantanamo Bay were innocents caught up in the war in Afghanistan. But the opposition is not buying his views and is, in fact, contemplating legal action to stall the Nasheed move, the Policy Research Group (POREG), an independent think tank, said in a post on its website, www.poreg.org

Neither of the two Guantanamo Bay detainees, who would be flown to Maldives, has been named yet. More than 180 detainees still remain in the controversial American prison in Cuba for foreign terrorism suspects.

The Opposition Dhivehi Qaumee Party (DQP) strongly believes that President Nasheed’s decision is going to turn the island nation from ‘a tourist paradise into a terrorist paradise’. The party maintains that the government is not authorised under the constitution or the country’s laws to facilitate resettlement of foreign terrorists.

Another opposition party, the Dhivehi Rayyithunge Party (DRP), has taken the issue to the parliamentary National Security Committee.

Neither the Maldives nor the US has so far revealed the nationalities of the two suspects.

Among the suspects detained at Guantanamo Bay is a Maldivian national Ibrahim Fauzee who was picked up in Karachi in May 2002 and transferred to the detention centre because he was living with an Al Qaeda suspect. No evidence of involvement in terrorism could be found against him and he was reportedly released in 2005. His present whereabouts are not known. Nor is it known whether he is one of the two suspects to be accepted by the Maldives.

But it would be a matter of grave concern if the Maldivian Government re-settles in its territory Pakistani, Afghan or Yemeni suspects. There is a strong possibility that these terrorists, given their anger against the US, would take to terrorism from Maldives as well. Already, the Lashkar-e-Taiba (LeT) has been recruiting Maldives nationals and training them at its camps in Pakistan.

Maldives, which has many uninhabited atolls (islands), could attract Pakistani and Al Qaeda terrorists interested in sea-borne terrorist attacks similar to Mumbai 26/11. This would add to India’s concerns and may make the South Indian states vulnerable.

The LeT is believed to have ‘nearly 1,000 operatives active’ in the Maldives. There are also concerns that LeT is trying to establish a ‘sleeper cell’ on the Muslim nation. The isolation and strategic location of the Maldives makes it a tempting target for groups such as LeT.

The bankrupt economy which President Nasheed inherited last year is showing signs of recovery. There has been progress in preventing movement of drugs through the country a sharp increase in seizures. In fact, this year, the total quantity of drugs seized in Maldives is equal to what had been seized over the past decade. But the addiction level continues to be high with more than ten percent of the population addicted to drugs as before.

Another area, where the government is slow in even acknowledging is religious extremism.

Maldives was once considered a liberal Islamic nation. Not any longer. There are reports that fundamentalist practices are increasingly getting currency. This has been admitted by none other than Vice President of the Maldives Dr Mohammed Waheed Hassan. He frankly stated that Pakistan and Afghanistan militant groups are recruiting young Maldivians to wage ‘jihad’.

Increasing number of young Maldivians are ‘embracing a version of Islam which is stricter than the traditional Islamic values of our country’, says Waheed and adds that some of these people are ‘going to Pakistan and Afghanistan and are waging jihad’.

Some time ago, Al Qaeda featured a Maldivian national in one of its videos. The clip was apparently shot Ali Jaleel (30) from Male killed himself in a suicide mission. The video shows him saying ‘I will wage jihad. If I die, I will die as a martyr’.

There are close to one hundred Maldivian nationals in Waziristan and in the Pakistan- Afghanistan border belt, according to information with the Maldives government. A hundred more Maldivian nationals have received military training in Pakistan to join jihad or for some other activities. Some Maldivians have reportedly returned home after training in Pakistan but their number is not known.

At least ten Maldivian nationals were killed in South Waziristan so far. Some Maldivians are said to be locked up in Pakistani jails. Neither their offence nor their number is available.

Islamic Extremism is fast emerging as a challenge to Male as the country allows unrestricted arrival of clerics, qualified and unqualified alike, from abroad, and new religious organisations are springing up under new names without any check. With Pakistan acting as a magnet for Maldivian students, Nasheed government is making rigorous background checks on any student travelling to Pakistan; it is also verifying whether the institutions they are getting admitted into are recognised by the Pakistani government. Simultaneously, the authorities have put under the scanner the claims and promises student recruiting agencies from Pakistan make to the parents. The government puts the number of unregistered Maldives students in Pakistan now at between 200 and 300.

As a part of efforts to check Islamic extremism from spreading, the Nasheed government is encouraging students to go to countries like Malaysia and India and is offering a range of Islamic scholarship programmes for studies at registered institutions in these countries.

At the security level, the Maldives is establishing a chain of coastal radars stations across the country’s atolls which will be networked with India’s own radar network, the Poreg report adds.