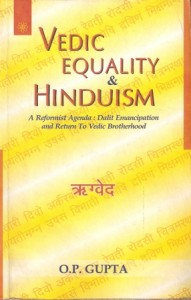 Title: Vedic Equality & Hinduism
Author: O P Gupta
Pages: 322; Price: Rs. 295/-
Publisher: New Age Books
A-44, Naraina Phase -1,
New Delhi- 110028
The author, O P Gupta was a diplomat by training and temperament, as he himself states at the outset. He wrote the book under review during his stint in Helsinki as India’s ambassador to Finland, though he traces the genesis of the book to his postings in several other world capitals. The sub-text of the book is Dalit Emancipation and Return to Vedic Brotherhood. While part one of the agenda is eminently laudable and is indeed achievable, it is doubtful whether it is fair and proper to entertain the thought of reinventing the wheel when we in India and the world at large have travelled a long distance over the past 5000 years to conquer new frontiers.

The blurb, introducing the author, says, he feels concerned about the Dalits and their emancipation as also about the ills that beset the Hindu society today, and is deeply committed to their removal.

Gupta (his full name is not given any where) hails from Varanasi (also called Kasi and Banaras) where he was educated; he started his life as a lecturer in Mathematics at the Banaras Hindu University. In July 1971, he joined the Indian Foreign Service. And it was during his foreign postings that he developed interest in Vedas and Hinduism

The author is honest to admit ‘having largely been ignorant of basics of my own religion, I started studying Holy Vedas, Holy Qur’an, and Holy Bible, (in) the primary sources, so as to understand what primary sources command rather than being guided by secondary sources or by opinions of other learned authors’.

What prompted the study was the disadvantage that stared at him during lively discussions with foreigners at social gatherings or at diplomatic receptions and dinners. Some of the questions that Gupta says he faced were: Who are Dalit Hindus? Why Dalit Hindus are opting out of Hinduism? Do Vedas sanction birth – based castiesm? Why Hindus don’t take beef? What is the status of women in Vedas and Hinduism? How old are Vedas? What is their antiquity?

Veda literally means divine knowledge. And the shlokas of Vedas are ‘revelations’ to the blessed ones from time to time by God. Rishi Vedvyas arranged them subject-wise into four books – Rig Veda, Yajur Veda, Sam Veda, and Athervan Veda.

The famous Gayatri mantra is a Rig Vedic mantra; it appears as the tenth shloka of the 62nd Sukta in the third chapter (RV III.62.10). Since it is still chanted daily as was being done during the Vedic times, it shows ‘the unbroken continuity of Vedic traditions among Hindus’, according to the diplomat – author. He has a wonderful narrative style which is the main strength of the book. At least the first few chapters hold the attention and make a compelling reading.

Gupta occasionally sounds as a Hindutva campaigner. He appears to get carried away by his arguments to ‘liberate Hinduism from the shackles of ignorance’ and to ‘jettison he excessive baggage of castiesm’. He has a point. Most Hindus, particularly English speaking middle classes have a limited exposure to religion and for them religion mostly stands for rituals like pooja at home or in a temple on auspicious days, and occasional attendance at ‘satsang’ and bhajan sessions.

In the Indian political lexicon, the word manuwadi implies the one who supports birth-based castiesm. Because the general impression is that the Manusmriti that dates back to around 200AD says so. The impression is a result of ignorance. Says the author: ‘It may come as a complete surprise to many people that there are many shlokas in Manusmriti which lay down that it is the qualification (karma of the present life, acquired knowledge and skills in the present life), which is the basis of categorization into four classes. However, such shlokas have largely been ignored’. (Page 73)

Quoting a shloka (X.65), Gupta argues that the Manusmriti has clearly provided for upward social mobility based on education and qualification. Based on two more shlokas (II.157 and 158), he contends that Manusmriti has declared that a brahamana by birth is truly speaking not a brahamana if he did not know the Vedas.

The translation of the two shlokas reads: “Just as a wooden toy elephant cannot be a real elephant and a stuffed deer cannot be a real deer, so without studying scriptures and the Vedas and the development of intellect, a brahamana by birth cannot be considered a real brahamana. As a eunuch is unproductive with women, as a cow with a cow is unprolific, and as a gift made to an ignorant man yields no reward, even so is a Brahamana useless who (does) not (know) the rikas”.

Manusmriti has laid down the bar which one must pass to be included into a particular class, according to Gupta, who also disputes the general perception that Purusha-Sukta of Rig-Veda (90th Sukta of 10th chapter) sanctifies birth based caste system. Instead of sanction, it preaches just the opposite. ‘It preaches total equality, perfect unity and complementarity of all the four professions – brahamana, rajnya, vaishya and shudra.’

By using primary sources, though in English translation, ambassador Gupta demolishes myths like Vedic sanction to sati, and opposition to widow’s marriage, and provides full text of the original Vedic shlokas in Sanskrit ( in Devanagiri) to let the readers draw their own conclusions.

Commendable effort, indeed, the book is.