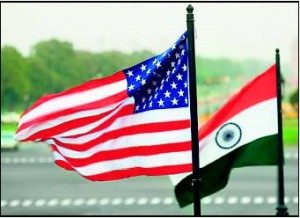 With the conclusion of the first India-US strategic dialogue, and in the light of the euphoria it has generated, the views of a well-known American journalist about why the USA, or any other country for that matter, does not exhibit the kind of respect that India, with its traditions, deserves become relevant.

To talk to J. Edward Murray is to understand the greatness not of the USA but of India! A habitually soft-spoken and mild-mannered person, he seemed to lose his temper only once during the two-hour-long interview, when he expressed a sentiment the whole spirit of which was very much that of, if I may say so, the vindictive psalmist invoking curses on the ungodly to suit an age which professes itself eager for the healing of animosities and the growth of better feelings between people.

“When if ever, will you Indians understand the spiritual greatness you are heir to? Should you wait for foreigners like me to make you conscious of it?” he asked angrily.

What is the greatness he is talking about? Is he speaking as a journalist or does he have some special qualifications for talking about it?

His bulging eyes flickered behind thick glass frames and he began to fumble with a pin cushion. I froze, imagining the sharp mind marshalling a lacerating answer.

“The honest answer is both”, he said quietly. “As a journalist, I have had many opportunities to understand India and Indians, and as a practicing Buddhist, not a faddist, mind you! I have arrived at the conclusion that the seeds of both Judaism and Christianity came from Hindu scriptures.”

The thesis, no doubt, sounds like music to the ears of the Indian interviewer, but can the interviewee prove it? For 15 minutes Murray rattled off facts much faster than I could take them down. Suffice it to say that, after hearing him, nobody could question the thesis. He led an outward life of sybaritic meagerness but a mental life of plenty. Besides, he had admittedly read more books than becomes a journalist! Yet, only occasionally did he, in that sense, defy his interviewer, nudging me, like a jovial examiner, into admission of my ignorance.

If, very often he was diffuse, mischievously leaving the hunt to run after any scent that promised intellectual adventure, he was always absorbing. He did not beguile with brilliantly apt and symbolic illustrations. Neither did he chloroform criticism with a well-placed metaphor. He looked more interested in hearing others than in speaking.

What were the major stories he covered? “The death of Mussolini, the Paris Peace Conference in 1946 and the D-Day landing,” he answered in a tone that suggested that they were not earth-shaking events! The coverage of these events also marked the beginning of the humble arrogance that most journalists have, knowing that it is hardly likely that they will ever do anything really good, and yet not wanting to be judged by standards that will accept anything less.

From Rome he went to Los Angeles in 1948 to start “Los Angeles Mirror”, and was its managing editor for 12 years. Then he moved to Phoenix, Arizona, to become Editor of “Arizona Republic”, and held that post for 11 years. From there he shifted to “Detroit Free Press” with which he remained associated for five years. But by then he had become President of the American Society of Newspaper Editors (1972-73). About that time he led an Editors’ delegation to China. Earlier, he had gone to Russia. “I have reported, in all, from 35 countries,” Murray said with a grin.

Since 1950 Murray had been a Zen Buddhist, and still meditates every day. “I retired in 1982 as Editor and Publisher of ‘Daily Camera’ at Boulder, Colorado, after a six-year stint.” Since then he had been concentrating on Asia and working for World Press Freedom Committee.

“Among all the non-English-speaking countries, the English press in India is the best. This is what I have been saying all along, be that in Kathmandu where I went in 1982 to address a one-month seminar for Third World journalists, or at Dhaka where I spent a month training journalists,” Murray said with conviction.

He had had more occasions than one to visit Delhi, Agra (“your Taj Mahal must be seen to be believed”), Mumbai, and Kolkata.

“India, China and Russia are the three countries that the world can learn a lot from. Since India is the mother of all religions, mankind can benefit a great deal from it. And even the worst critic of India must, at one time or another, marvel at the way such a populous country has worked democracy after becoming an instant democracy following centuries of colonial rule. And the holding together of so many communities and linguistic groups is no mean achievement.” There was genuine admiration in Murray’s voice.

Another thing about India that seemed to fascinate Murray was the “prevalent and traditional views of poverty”. The nexus between “poverty and karma is an entirely new concept for an average Westerner”. His conversion to Zen Buddhism did mean the swapping of one convention for another, but it was much more than, to adapt Yeats, the fascination of what is different.

Now it was time for me to exhibit my perversity. While his admiration for India and its democracy was heartening, how come successive US Administrations had shown a “tilt” against India and toward other countries that had discarded democracy?

Murray did not pause before saying: “Speaking as a middle-of-the-road Democrat, I would say only one thing. You cannot expect other countries to respect yours until you learn to respect it yourself. Both the United States and Russia are courting China because one of the many assets of that country is its people’s national pride.”

Well, I nodded in agreement. That was in the year 1984. Today he is no more. Murray died in 2005 shortly after his mother land elevated him to the Hall of Fame.

Did anyone of his entourage bring to Minister Krishna’s attention the views of Murray as he landed in Washington? We don’t know, as yet.