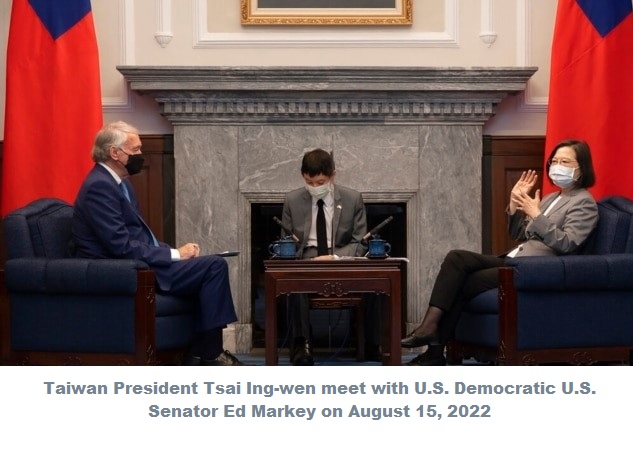 The United States said the visit of U.S. lawmakers to Taiwan was in line with Washington’s long-standing bipartisan policy and urged China not to overreact to “peaceful visits” by members of Congress or unilaterally change the status quo in the Taiwan Strait.

On the occasion of a meeting between a U.S. congressional delegation and members of Taiwan’s President Tsai Ing-wen and the Legislature, the Chinese military said Monday (Aug. 15) that Chinese troops were conducting more exercises near Taiwan’s Penghu Archipelago.

The latest U.S. congressional delegation to Taiwan was led by Ed Markey, chairman of the Asia-Pacific subgroup of the Senate Foreign Relations Committee. A few days ago, Nancy Pelosi,000 speaker of the U.S. House of Representatives, infuriated China.

Senior U.S. officials say China has overreacted. Washington said Beijing used this as an excuse to try to change the status quo in the Taiwan Strait.

“Members of Congress have been to Taiwan for decades, and they will continue to do so,” State Department spokesman Ned Price said monday at a news conference about the latest congressional delegation to Taiwan. “Ten or more congressional delegations have visited Taiwan this year alone. The visit of members of congress to Taiwan is fully in line with our long-standing ‘one-China’ policy. “The core fact is that these are peaceful visits by members of Congress who go there to express their support for the people of Taiwan.” “It’sclear that for some time now there’s a party seeking to change the status quo,” Price said at a news conference Monday. Not the United States. Not Taiwan. It is the PRC (People’s Republic of China) that is challenging the status quo and trying to erode the status quo.

Sen.Markey and four other members of the U.S. congressional delegation said in a statement that they had the opportunity to exchange views with members of Taiwan’s Legislative Yuan on a number of issues, including “support for peace and stability in Taiwan, as Taiwan faces “increasing authoritarian pressure from Beijing.”

But China said the visit by the U.S. congressional delegation “violates China’s sovereignty and territorial integrity.” Government representatives in Beijing once again said that China will take resolute and forceful measures against the visit of acting members of the US Congress to Taiwan.

“They [U.S. congressional visiters] should not go further and further in the wrong direction,” Zhang said Monday. Zhang Jun said: “The whole world can see very clearly, who is provoking, who is challenging the status quo, who is creating trouble in that part of the world.” As far as China is concerned, we will do everything in our power to defend our sovereignty and territorial integrity. For decades, the United States has made it clear that the U.S. decision to establish diplomatic relations with China in 1979 was based on the expectation that Taiwan’s future would be determined by peaceful means, as stipulated in the Taiwan Relations Act.

Earlier on Monday, the Eastern Theater of China’s People’s Liberation Army announced the organization of a joint combat exercise of multiple services and arms in the sea and airspace around Taiwan Island.

The Eastern Theater said the exercise was “a solemn deterrent to the United States and Taiwan continuing to play political tricks and undermine peace and stability in the Taiwan Strait.”

State Department spokesman Price said monday at a news conference that Washington’s response to the Beijing military exercise was restrained and responsible.

“The PRC is completely overreacting,” he said. Our response to PRC provocations has been restrained and responsible. We made it clear that we have no intention of escalating and that there is no reason for a crisis, but we also made it clear that, as the White House said friday, we will not be intimidated and will continue to fly, sail and operate in the region under international law. That’s why, as you heard on Friday, President Biden instructed the USS Ronald Reagan to stay in that area longer, and he also announced that he would do more to support Taiwan. Yang Yongming, former deputy secretary-general of Taiwan’s

National Security Council, told VOA Chinese department that one of the purposes of Senator Mackey’s delegation to Taiwan was to show that China’s attempt to blockade Taiwan might not be effective.

Yang Yongming, former deputy secretary-general of Taiwan’s National Security Council, told: “The first is to express the continuity of political exchanges and interaction between the United States and Taiwan through five parliamentarians. The second is to break the impression that the Plato Force (PLA) had both blockaded Taiwan militarily and diplomatically during the last military exercise. The third is also a political test of U.S. arms sales to Taiwan and warships crossing Taiwan.###