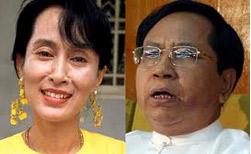 By M RAMA RAO
New Delhi (Syndicate Features): President Obama’s announcement Friday Nov 18 in Bali that he was sending Secretary of State Hillary Clinton on a visit to Myanmar next month is recognition of the steady transition that the country has been making over the past one year. His announcement has coincided with the decision of ASEAN member nations to let Myanmar take over the chairmanship of their grouping in 2014. These two decisions though apparently unrelated are a signal that the long years of diplomatic isolation of the predominantly Buddhist country is about to end.  In a way, it is a triumph of ASEAN’s policy of engaging the military junta much against the will of the US.

Only through dialogue and constant interaction will it be possible to change the course of events in the 21st century. Vietnam yesterday and Iraq today are shining examples of the failure of policy prescription based on satellite imagery.

As Myanmar’s next door neighbour, India has every reason to feel elated at the turn of events. Conventional wisdom had suggested that Delhi should, as a democracy support the Burmese icon of democracy, Aung Saan Sui Kyi, and keep away from the Junta. But India has not hesitated to engage with the military junta. Not because China has become a big factor in Yangon ( Sino-Myanmar trade has zoomed to $4.4 billion and Chinese investments in Myanmar have crossed $12 billion mark in 2010) but because of the considered view that people of the impoverished country should not be made to suffer and any engagement with the ruling establishment would ultimately percolate down to people.

Now, the Obama announcement and the ASEAN decision are a vindication of the stand. Whether the American President was prompted to see Myanmar in a new light by Dragon’s shadow there is not relevant even if he had factored in the China factor. Because, China is no longer having a smooth run despite its first mover advantage.  And the Communist neighbour is made to accept the terms of Yangon’s choice as is clear from the quasi-military regime’s decision to halt work on a major dam project that has generated grassroots opposition.

The road ahead for Myanmar is very long and the journey may not be very smooth in the short to medium term.  Both the people and the government of the day have the will and determination to go forward hand-in-hand.  A clear indication of this is the reported plan of Suu Kyi to stand for Parliament in a by-election. She boycotted the election held around this time of the year last year after her party, National League for Democracy, was disqualified from contesting on one pretext or the other. Some of her colleagues entered the fray but did not do well in what was certainly a one-sided contest at the hustings. In the past couple of months, however, the regime has tried to put the clock back and opened a dialogue with Suu Kyi.

Highlighting the seriousness of its intent, the government, led by a former general, Thein Sein, has put in place a series of reforms that are designed to make freedoms a little more meaningful and life a little more relaxed. Several political prisoners have been freed. Liberalisation of the heavily state-controlled economy has been set in motion.

As President Obama said while announcing his decision to send Clinton, after years of darkness, ‘we’ve seen flickers of progress’ in these last several weeks. He said: “For decades Americans have been deeply concerned about the denial of basic human rights for the Burmese people.” And noted: “The persecution of democratic reformers, the brutality shown toward ethnic minorities and the concentration of power in the hands of a few military leaders has challenged our conscience and isolated Burma from the United States and much of the world.”

So, while not minimising the progress noticed, his message to the Myanmar leadership is: ‘There is far more to be done’. When Hillary Clinton becomes the first US Secretary of State to visit Myanmar in fifty years, she will notice that Yangon itself is duly conscious of the work to be done.  Also its resolve to move forward at its own pace and to its own agenda.

As New York Times reported, Myanmar has long coveted the rotating chairmanship of ASEAN. It had an opportunity in 2006 to head the most effective regional grouping but renounced its turn in the face of western pressure over human rights abuses. Indonesian foreign minister, Marty Natalegawa put the issue in perspective by saying, “It’s not about the past; it’s about the future.  We’re trying to ensure the process of change continues (in Myanmar) (Syndicate Features)