December 23 is the death anniversary of former Prime Minister P V Narasimha Rao. There will be official functions in Delhi’s Andhra Bhavan and elsewhere to pay homage to the Telugu bidda from Karimnagar. For the likes of me, who love our ringside seat, these mandatory exercises are a grim reminder of the final humiliation PV suffered in death. The tall leaders, who are going around chanting the FDI mantra today, were mute witnesses to that sad spectacle. PV was no Charan Singh. Nor was he Inder Kumar Gujral. Yes, the three were accidental prime ministers but unlike them, he had carved a place for himself under the Indian sun. Yet, he was denied the state funeral in Delhi, which was accorded to the Jat leader and the refugee from Lahore.

Indian tradition demands respect to the dead man even if he is your worst enemy and expects you to walk the extra mile to honour the sentiments of the bereaved family. PV’s sons were keen on conducting the last rites if not on the banks of Yamuna, the final resting place of most political leaders of modern India, at least in the Delhi Cantonment. The ‘messenger’ of the day conveyed the ‘wish’ to the family that mattered. And came back with ‘official no’.

Aided by a Chief Minister, who had been made to fly into the capital, cutting short his Christmas Day preparations, the messenger convinced the bereaved family to opt for Hyderabad. ‘I am forced to miss the Christmas at my native place for the first time in my life because of PV’, the Chief Minister told me. 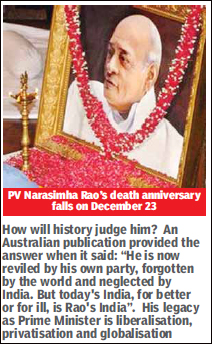 The Congress has a long tradition of placing the body of a departed leader at the party headquarters to enable the workers to pay their respects. This tradition was also given a go-by. In fact, what we heard was that the powers that be clearly stated that the body of Narasimha Rao was not welcome inside the AICC headquarters at 24, Akbar Road. This building was just a few yards away from the Motilal Nehru road residence of the former prime minister.

‘Insider’ was the title of the book PV had written. ‘Outsider’ would be the appropriate title for a book on the way the Congress treated him after his death.

How the history will judge him? An Australian publication provided the answer when it said: “He is now reviled by his own party, forgotten by the world and neglected by India. But today’s India, for better or for ill, is Rao’s India”.

His legacy as prime minister is liberalisation, privatisation and globalisation.

The nation, in fact, the Congress Parivar, which swears by Rajiv Gandhi, must remain grateful to PV. So should be the followers of Mandal Messiah, V P Singh.

Rajiv could not sell his ‘Panchayati Raj’ dream to Parliament. Suffering a loss of face in the Rajya Sabha, he went for a snap election and lost the ballot. V P Singh turned to Mandal report in order to checkmate the dreams of Devi Lal and created mayhem across northern India, particularly Delhi.

PV educated both on how to get parliamentary approval without creating divisions in the society. The way he invoked the consensus mantra and highlighted his own rural roots to make all shades of opinion in Parliament to agree to give a push to democracy at the grass-roots level is a lesson in floor management. And the way he had handled the Mandal card was a demonstration of how social engineering should be achieved.

Sitaram Kesri was so impressed by the PV feat that he declared he would touch the feet of Telugu bidda. He did not stop there. He chided the Congress MPs from Andhra Pradesh that they did not know how to show respect to their leader.

The occasion for Kesri speak was a function held in Parliament House Annexe to hand over the letter of appointment to the first OBC selected for government job under the Mandal Quota. Sitaram Kesri was the Minister of the day for Welfare.

Well, the very same Bihari turned against PV and humiliated him and his soft-spoken personal assistant of long years. All this is a part of folklore of Indraprastha, which, according to GVG Krishna Murthy, a former Election Commissioner, is no more than a ‘Kutra Prastha’.

Two nuggets about the former prime minister. Just to show that he was not indecision incarnate as many are made to believe. And that he was always quick to cut to size anyone indulging in bravado.

Palaniappan Chidambaram and P R Kumaramangalam learnt this the hard way. As a Minister of Commerce, Chidambaram sent his resignation to the Prime Minister one day and arrived at the office of the Principal Information Officer (PIO) in Shastri Bhavan to announce his decision. No one expected the resignation to be accepted. He spoke with the media and walked back to his Fiat car. As he was settling at the steering, the PIO came running down his first floor office and told him that Rashtrapati Bhavan had issued a communication accepting his resignation. The victim was shocked.

Ranga, as Kumaramangalm was known, was administered a similar dose. In the post- Babri demolition assembly elections, initial trends showed the Congress was doing badly. Appearing on NDTV live from his home, Ranga displayed his heroics and tried to refurbish his secular credentials that go back to his family’s Arya Samaj roots. By the time ‘byte’ was over, this junior minister joined the ranks of formers.

The political class was surprised. They were not prepared for such decisive action. Nor were they prepared for the decisive verdict from the once BJP ruled states against BJP after the Babri Masjid’s demolition. Because in their tryst with candle light secularism, they refused to see the other side of PV coin. They persist even now with their refusal to let their attention to be drawn to the other side, which is visible to the BJP though.(Courtesy: The Hans India, Hyderabad)