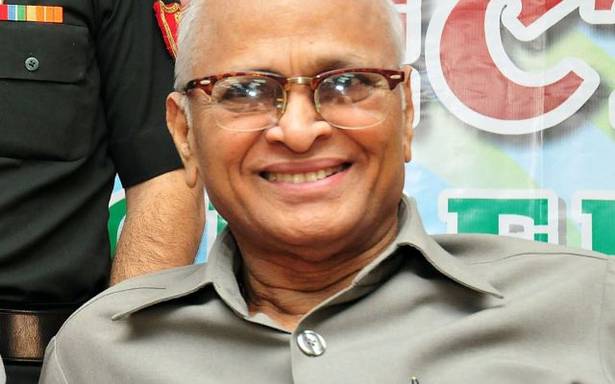 Dr GVG Krishnamurthy, former Election Commissioner of India, passed away on Wednesday, April 14 due to age related ill-ness. He was 86. He had been unwell in recent months particularly after a fall at his Kausambi residence.

GVG as he was popularly known, Krishna Murthy was a lawyer by profession and training. He had authored a book on diplomacy, which has been prescribed as a must-read text in several universities across the world.  During his long innings in government, GVG was close to Indira Gandhi, who had sent him to UN General Assembly as a member  of Indian Parliamentary delegation once.

Rajiv Gandhi government however side-lined him and shunted him to the Law Commission as Member – Secretary.   In the wake of Bhopal Gas Tragedy, he played a stellar role in the legal team that fought against American multinational Union Carbide in the American courts for a handsome compensation to the victims.

GVG- Seshan fight became a part of Lyutens Delhi’s folklore, and ended up in the Supreme Court, which gave equal status to the three Election Commissioners. It was a knockout blow to Seshan, who used to stoop low (he got the phone lines cut once) to settle scores with fellow ECs.

When the judgement came, Seshan was in the US to renew his Green Card. A reporter asked GVG if he expected Seshan to cut short his US visit and return home.

Pat came the reply: “He can cut short everything except his tongue”. At the same presser, when asked about Seshan’s telephone number in the US, he remarked: “I am not anyone’s agent. Least of all a small-time vegetable seller’s”.  The dig was a reference to Seshan promoting Safal frozen vegetables in a TV commercial.

Making Election Commission a three-member body was Prime Minister P V Narasimha Rao’s idea to cut to size “Alsatian” Seshan, who had instilled fear in the hearts of politicians of all hues.  GVG was a good friend of Rao and their friendship dates back to their time in Hyderabad. Both travelled together to Delhi and enrolled as lawyers in the High Court in the late fifties.

“No. PV did not choose me as EC.   Pranab Mukherjee and several other Union Ministers prevailed over PV to send me to checkmate Seshan”, GVG told me in a free-wheeling interview some years later. Till he entered Nirvachan Sadan, GVG and Seshan were good friends, and their two families bonded well in their cultural and spiritual quest, besides love for music.

As Election Commissioner, GVG endeared himself with the field staff – district level returning officers, who are also the district magistrates. After every election during his Nirvachan Sadan days, he wrote a personal letter to each returning officer and district police chief commending them, and made the letters a part of the personal record of the officers concerned.

Well, there is no need to say that he became a darling of the district level IAS officers across the country. It is this ability to build personal rapport at the ground level, helped GVG conduct a free, fair and fearless election in Jammu and Kashmir in the post- Rao era.  Prime Minister Rao wanted to hold the Kashmir election but he blocked the plan as a protest against Rao ways.

Whip-free Presidential and Vice-Presidential election is GVG’s lasting contribution. “A whip isn’t free and fair’, he asserted and earned the wrath of political parties in the early days of coalition era in 1997 but he stood his ground making it clear the voters (law makers) in the Prez election cannot be forced to vote to particular candidate by party bosses by issuing a whip.  This decree has since become a part of Prez election process.

GVG was born in a middle-class Brahmin family at Chirala in the present-day Andhra Pradesh. He had earned a first class with Gold Medal in his quest for a law degree.   As a practicing lawyer in Hyderabad, he taught in the local Law College. Shiv Raj Patil, who went on to become Union Home Minister and Lok Sabha Speaker, was one of his illustrious students.

A self-made man by all accounts, GVG moved in the Delhi circles as a close ally of stalwarts like Krishna Menon and Damodram Sanjeevaiah.  He was a mentor to many upcoming leaders on the social, and cultural scene in his capacity as the patron of several voluntary organisation.

He and Bhishma Narain Singh were inseparable on the cultural circuit. Death of Singh a couple of years ago affected him and his loneliness doubled after he met with an accident and became confined to bed at home.

GVG leaves behind wife, Padma, a son, GV Rao, a Delhi based senior advocate, and a daughter, who has settled with her husband in France.