*In Syria, the Islamic State will continue to lose cities and vital territory.
**The group will react to its losses by relying more heavily on insurgent and terrorist tactics, ensuring that it remains a serious threat.
***The continued disenfranchisement of Sunnis in Syria will enable the Islamic State, and groups like it, to maintain a foothold in the country. 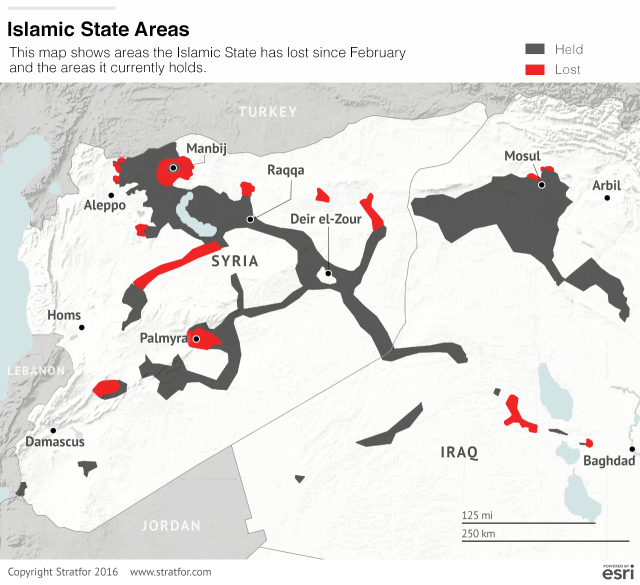 In Syria, the Islamic State is in crisis. Over the past three years, the group has managed to expand from a regional nuisance to a force with global relevance, declaring a caliphate in June 2014 that stretched from Iraq’s Diyala province to Syria’s Aleppo province. By doing so, it linked the two nations into a single zone of conflict and drew the attention of numerous powers, including the United States, Turkey and Russia. Today, the group maintains a presence from western Iraq to the Syria-Lebanon border — an impressive territorial spread.

But the breadth of the Islamic State’s holdings in Syria is deceptive. The group’s actual reach is largely limited to small, dispersed enclaves. The unbroken expanses of territory under its control are mostly empty desert. And a look at the group’s three core Syrian areas — northern Aleppo province, Raqqa and Deir el-Zour — shows how the Islamic State is steadily losing ground across its scattered, self-declared empire. Together, these territories form the foundation of the group’s power in the country and are critical to sustaining flows of revenue, fighters and materiel. Yet all three are under threat.

Even as its foundation erodes, the Islamic State will remain a significant and deadly force as it adopts new tactics. But although it will continue to win battles and take villages and cities, the extremist group’s peak in Syria is clearly past. The group’s strength will diminish despite its nominal gains. Even so, the Islamic State and groups like it will never fade completely as long as Sunni grievances persist.

Northern Aleppo
The Islamic State’s major holdings in northern Aleppo province stretch from the city of Sawran in the west to Manbij in the east. The area is one of the most highly populated regions that the militant group controls, and because it borders Turkey, it serves as a transit point for smuggled supplies, weapons and foreign fighters — the last significant one the Islamic State has left. Northern Aleppo also contains the village of Dabiq, where the Islamic State believes a final, apocalyptic battle will take place.

Now, for the first time since the declaration of the Islamic State caliphate, northern Aleppo is under siege from three sides. Rebels from the city of Azaz have been pushing eastward into Islamic State territory, although their progress has been slowed by fighting with Kurdish People’s Protection Units (YPG) to their rear. To the south, loyalist forces backed by Russian air support took the area around Kweiris air base last November, breaking a two-year siege by the Islamic State. They are now poised to advance farther north to capture the town of al-Bab. Most important, the U.S.-backed Syrian Democratic Forces have launched a significant offensive west across the Euphrates River and are set to retake Manbij from the extremist group.

Under attack from the east, west and south, Islamic State forces in northern Aleppo are also constantly harried by Turkish cross-border artillery fire as well as Russian and U.S.-led coalition airstrikes. It is no wonder that the group is quickly losing territory in the region. In fact, the Islamic State is so desperate to halt the Syrian Democratic Forces’ offensive that it has retreated from villages ahead of the Azaz rebels’ arrival to send reinforcements eastward.

But there is another loyalist offensive underway that, if it pans out, will pose an existential threat to the Islamic State’s northern Aleppo zone by completely cutting it off from the rest of the group’s Syrian territory. The operation, launched June 2, pushes toward the city of Tabqa on Lake Assad in Raqqa province, following the route of an earlier offensive that began in February but failed to make much headway. With higher levels of support and resources, the latest assault stands a good chance of blocking the road connecting northern Aleppo to the Islamic State capital of Raqqa. The loss of northern Aleppo, the route to Raqqa or smuggling routes into Turkey would be a serious blow to the extremist group. 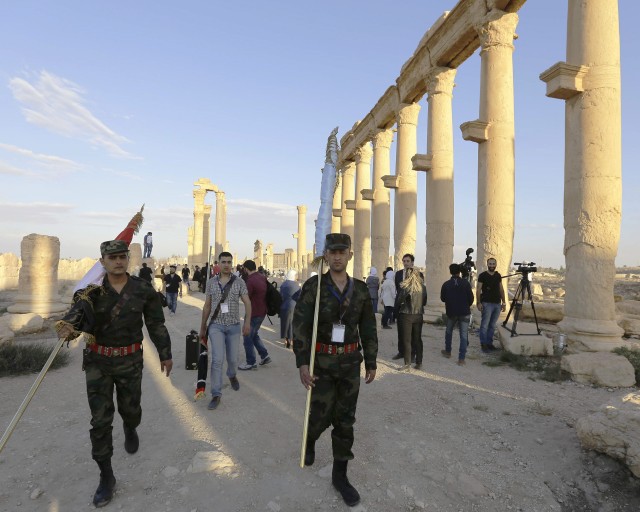 Raqqa
The Islamic State’s de facto capital, Raqqa, is also in considerable danger. As in Aleppo, the greatest threat to Raqqa comes from the Syrian Democratic Forces, who launched an offensive to take the outskirts of the city in late May. Progress has been methodical but slowed by the training of the Arab fighters expected to spearhead the final assault on the city itself.

Meanwhile, if the loyalist advance on Tabqa that threatens the Islamic State in northern Aleppo is successful, it could eventually morph into an attack on Raqqa, which lies only 55 kilometers (34 miles) east. The race for Raqqa between the Russian-backed loyalists and the U.S.-backed Syrian Democratic Forces will make the Islamic State’s ouster from the city more likely.

Such a loss would be devastating for the militant group. The city not only holds symbolic value as thecapital of the Islamic State’s self-declared caliphate, but it is also an important hub for people and supplies. Raqqa sits on the Euphrates River and is key to controlling several critical highways in Syria. It is also one of the largest populated cities in the Islamic State’s control and an important economic center surpassed only by Mosul, Iraq.

Deir el-Zour
Islamic State fighters are embroiled in a different set of challenges in Deir el-Zour than they are in the group’s two other cores. The city itself is contested by Islamic State forces and loyalist troops, but the militant group fully controls the rest of the province. Because the Islamic State has already lost its grip on the hydrocarbon deposits in al-Hasaka and Homs, Deir el-Zour is crucial both to its oil and to its position as a gateway to the group’s territory in Iraq. Although much of the province is desert, there are a number of population centers in the Euphrates River Valley.

Unlike northern Aleppo and Raqqa, Deir el-Zour is not yet under severe threat. In fact, the Islamic State even made progress recently in its effort to eliminate the remaining loyalist pocket in Deir el-Zour city. The group’s control of Deir el-Zour, therefore, will probably remain its most enduring in Syria.

Nevertheless, even in its most secure enclave, the Islamic State is not at ease. Multiple opponents are attempting to make inroads into the energy-rich region. To the north, the Syrian Democratic Forces have largely pushed the Islamic State out of al-Hasaka and have made some advances into Deir el-Zour province itself. But although these forces are focused on northern Aleppo and Raqqa, they are unlikely to stage significant offensives in the area and will instead carry out minor attacks to harass the Islamic State. To the west, government troops continue to try to advance from Palmyra toward Deir el-Zour to reach and relieve the city’s loyalist garrison before it is overwhelmed. Given the distance involved and the overstretched state of the loyalists, their efforts are unlikely to succeed anytime soon but will certainly take up some of the Islamic State’s attention.

Adapting to Survive
As the Islamic State has grown in strength, it has transitioned from being primarily a terrorist and insurgent movement to being one that deploys conventional battlefield tactics using large organized units, artillery and armor. The group’s adaptation has enabled it to capture significant territory in Syria and Iraq. But now the Islamic State could see its fortunes reversed. While the group’s three Syrian enclaves face greater pressure, conventional tactics will become less useful as attrition reduces its manpower and destroys its equipment. More pressing, though, will be the breakdown of the logistical supply chains needed to maintain large-caliber artillery and armored vehicles in the field. These logistics, after all, require a safe and well-resourced territory behind the front lines.

But this does not mean that the Islamic State threat will be neutralized. Instead, as the group loses territory it will evolve to survive new conditions, remaining extremely dangerous. Unable to effectively field and supply conventional fighting units, the Islamic State will turn to insurgent tactics and terrorist tradecraft to lash out at targets. Instead of focusing on controlling territory, the group will use insurgent methods to gain the flexibility and mobility needed to stage hit-and-run attacks on its enemies in an effort to gradually weaken them. These attacks will not pose an existential threat to the Islamic State’s foes, but they will continue to cause massive damage.

The mutation of the Islamic State has already begun. Deadly May 23 bombings in Jableh and Tartus reflect the group’s return to terrorist methods. At the same time, small bands of Islamic State fighters are waging an insurgency in the desert areas of Homs and in the Qalamoun Mountains along the Lebanese border. Mobile, dispersed and flexible units can continue to carry out operations in the Islamic State’s name even as the extremist group loses its grasp over numerous cities and provinces. Striking from the shadows, the Islamic State’s insurgency and terrorist operations will manage to exert influence in Syria long after the group’s armies are defeated in the field.

Indeed, the Islamic State and its successors will continue to thrive so long as grievances exist among the Sunni populations of Iraq and Syria. Ousting the militant group from towns and provinces is a step toward stamping it out, since residents cannot rise up without outside help. Full eradication, however, will require accomplishing the less tangible task of turning the population against the Islamic State — something that can happen only if Syria’s civil war is resolved. As in Iraq and Libya, extremists in Syria are thriving on the instability of conflict zones and the gaps in government authority. The war between the loyalists and rebels not only serves as a distraction from the fight against the Islamic State but also perpetuates the very conditions under which groups like the Islamic State and Jabhat al-Nusra flourish. And unlike the offensive against the Islamic State, resolving this broader conflict will take more than airstrikes and rebel coalitions.

(<a href=”https://www.stratfor.com/analysis/why-islamic-state-weaker-it-seems”>Why the Islamic State Is Weaker Than It Seems</a> is republished with permission of Stratfor)