A Uyghur’s Story: What It’s Like Inside a Xinjiang Reeducation Facility

Home » China News » A Uyghur’s Story: What It’s Like Inside a Xinjiang Reeducation Facility

Gulbahar Haitiwaji, 55,says she experiences nightmares almost weekly in which she relives her time inside a Xinjiang detention facility.

“I always have that thought,” Haitiwaji, 55, told VOA. “We’re locked in there, cut off from the world. I’m always worried that they’re going to kill us.”

In a high-rise apartment on the outskirts of Paris, Haitiwaji, a Uyghur memoirist whose experiences have been published in multiple languages — the English version, How I Survived a Chinese “Reeducation” Camp, was released earlier this year —recently sat down with VOA’s Mandarin Service to recount the horrors of three years in detention.

“The first word I can think of is ‘hopeless,’ because we never know how long these days will be; and ‘fear,’ because we are so worried about the days ahead,” she recalled as her eldest daughter, Gulihumar Haitiwaji, translated.

Originally from Xinjiang, Haitiwaji was an engineer in China before moving to France with her daughters in 2006 to join her husband, who had moved there four years earlier. She said she received a call in November 2016. The person on the phone claimed to be an accountant of the Xinjiang Oilfield Company and asked her to go back to Karamay for administrative retirement procedures. 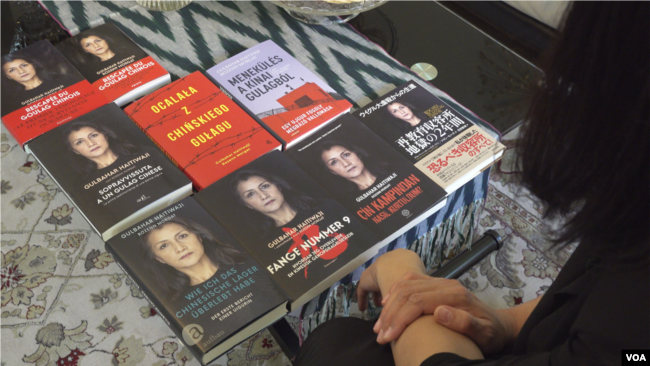 “I had no doubts because I never did anything against China in France,” she recalled. “But when I went, I realized it was a trap. Ten minutes after I got to the company, three police officers took me to the police station.”

The police questioned Haitiwaji and showed her a photo of her daughter attending a Uyghur rights rally in Paris.

Haitiwaji was allowed to leave temporarily that night, but police confiscated her passport.

Two months later, police asked her to go to a police station in Karamay to retrieve the passport. When Haitiwaji arrived, she was arrested.

Haitiwaji was placed in a cell designed to hold nine people; she said there were nine beds placed next to each other to make one big bed. She remembered 35 detainees crowded on that bed space, with metal rings on one side of the bed. Those punished would be shackled and tied to the metal rings.

Haitiwaji didn’t know why she was being punished.

“I couldn’t have a bowel movement for 10 days when I was tied to the bed, when I was tied like a dog — and the first time I did it in front of people, I cried,” she said.

The charges against her varied, but the central theme was terrorism.

“In the end, they said that my husband and daughter were terrorists, and [I’d failed to] report it,” Haitiwaji said. “As a Chinese citizen, I should report to the Chinese government.”

After being detained for four months and seven days, Haitiwaji was transferred to a “school” in Xinjiang.

“Each of us was assigned a prison number. I was No. 9. I never knew the names of the people I was locked up with,” Haitiwaji recounted.

She said fellow “students” had to march in unison back and forth under a portrait of Chinese President Xi Jinping. There were classes on Mandarin, literature, math, history and geography.

“We [were] like robots: getting up early every day, taking 11-hour classes, studying the curriculum set by the Chinese government — history, law, Chinese. … Every week we have to learn a red [Communist] song,” said Haitiwaji, recalling the names of the songs, including one called, “Without the Communist Party, There Would Be No New China.”

Every Friday was exam day, and the students were told they had to pass the exam or stay there forever.

In a 2021 press conference, Yalkun Yakup, deputy director of the Public Security Department in Xinjiang, called Haitiwaji by the name of Gulibahar Maihamutijan. He described her as a “separatist and terrorist” and accused her of lying. He said she was in China several times and “attempted to kindle riots” against the country, citing examples of her participation in various pro-Uyghur events.

In a 2021 article published by state news agency Xinhua, China described facilities in Xinjiang as vocational education and training centers that “fully guaranteed the trainees’ personal freedom and dignity.” The centers aimed to deradicalize those who were there, and all trainees had graduated by October 2019, according to the article.

Some scholars and human rights activists describe the facilities as internment camps, where anywhere from 1 million to more than 2 million ethnic Uyghurs and other predominantly Muslim minorities are arbitrarily detained.

An independent expert appointed by the United Nations concluded in a recent report that forced labor is taking place in Xinjiang.

A European Parliament resolution in June described Uyghurs in China as “systematically oppressed by brutal measures” and warned about “serious risk of genocide.”

The U.S. accuses China of forced labor and committing genocide. In June, U.S. officials started enforcing the Uyghur Forced Labor Prevention Act, banning imported goods from the Xinjiang region unless there is “clear and convincing evidence” that no forced labor is involved.

Beijing continues to dismiss the accusations as disinformation.

“Some forces manipulate Xinjiang-related issues and fabricated the disinformation on ‘forced labor in Xinjiang,'” said Chinese Foreign Ministry spokesman Wang Wenbin at a press conference in August. “In essence, they are using human rights as a pretext to undermine Xinjiang’s prosperity and stability and contain China’s development and revitalization. Their scheme will never succeed.”

In August 2019, through the efforts of her family and the French government, Haitiwaji was released and returned to Paris. She said she still thinks of the women she left behind in Xinjiang.

“They live in real prisons, and even when they are released, they are in open-air prisons because they have never had freedom of speech, freedom of criticism, freedom of thought and expression,” Haitiwaji said.

On the title page of her memoir, it says “to all those who didn’t make it out.”###