After Ayodhya’s mandir, how about Bapu’s Ram Rajya? 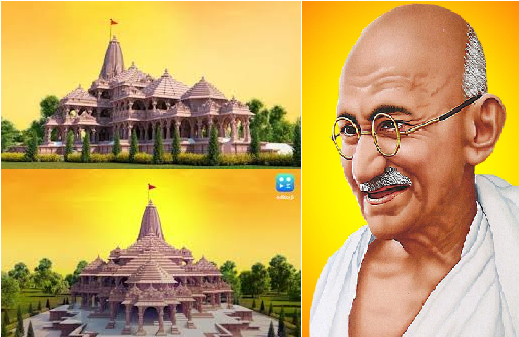 Home » News » After Ayodhya’s mandir, how about Bapu’s Ram Rajya?

By Hari Jai Singh
Amidst a galaxy of political celebrities, led by Prime Minister Narendra Modi, Ayodhya’s Ram Mandir has got rolling with a bhoomi pujan. This historic event fulfills the long awaited dream of India’s majority community after a protracted legal battle that ended with the Supreme Court handing over the disputed land to the Hindus. A site in Dhannipur, about 22 kms from the Ram Janmabhoomi site, has been allotted for the construction of a mosque. Iqbal Ansari, son of Hashim Ansari, one of the most well-known litigants in the Babri Masjid -Ram Janmabhoomi dispute, was present during the ceremony held in Ayodhya on August 5.

More than the planned majestic mandir, what matters in today’s materialistic world are the ideals that Ram represented that still have a universal appeal. The Ram Rajya dream is deeply embedded in the Hindu psyche. Its origin can be traced to the mythology, beyond the golden and not-so-golden periods of history. The sustenance for this dream, renewed by Mahatma Gandhi during the freedom struggle, is embodied in the Hindu epic, the Ramayana. An action-packed human drama, the mythological story of the Ramayana revolves around the virtuous, wise god-King Ram, who lives by high ideals and rules his kingdom by the law of dharma – ancient norms of justice, fair-play, liberalism, equality and righteousness. Ram is known to be a repository of all the virtues that make a human being sublime and divine.

During Ram’s regime in the Treta Yuga, the people of Ayodhya were said to be happy and content. All subjects enjoyed the fruits of their labour. Justice was done and seen to be done. The Sudras lived in harmony with the rest of the people, so much so that a washerman could cast aspersions on the conduct of Ram’s wife, Sita, while she was in the captivity of Ravana, the ten-headed demon King of Lanka. It is a different matter that Ram had been unjust to his beloved queen, about which he was later repentant. However, what is important to note here is Ram’s statecraft and his disposition to give ear to all members of society.

In today’s idiom, Ram was an enlightened, liberal and idealistic king. He interacted freely with his people, heard their grievances and tried to take remedial measures promptly. Rama is the heart throb of the people even today. They look towards him to lift them out of the mire of politics and social injustice they find themselves in.

Knowing the Hindu weakness for the ever-elusive Ram Rajya, Indian leaders have invariably tried to keep themselves afloat in the public esteem by promising the good old days of the mythological Ram Rajya. These leaders have, in fact, exploited the Hindu psyche politically, socially and religiously. The only exception was Mahatma Gandhi.

Bapu often stressed the need for the attainment of Ram Rajya once India had freed itself from imperialistic bondage. To achieve this goal, he expounded the ideology of a trusteeship, under which the means of the capitalist structure could be utilized for achieving social good. Mahatma Gandhi’s trusteeship system has all the ingredients to quicken the process of welfare and development. It is seen not only as a counterpoint to class conflict but also a vindication of the power of the people vis-à-vis the power of the State.

Mahatma Gandhi said: “My theory of trusteeship is no makeshift, certainly no camouflage. I am confident that it will survive all other theories. It has the sanction of philosophy and religion behind it”.

The trusteeship theory has surely survived, but only on paper. Gandhiji, however, believed that the trusteeship system would ultimately lead to Ram Rajya, where everybody is equal and no one is rich nor poor, whether he or she governs or is governed. This aspect of the Gandhian philosophy is akin to the Marxist credo that the State will “wither away”.

While the ethics concerning the conduct of rulers in the Gandhian concept may be set aside as the bedrock of equality, justice, fair-play and liberalism, Ram Rajya lives in the hearts of Indians. Mahatma Gandhi enjoined upon the rulers of free India to pursue it vigorously. However, the rulers have had their own ideas and ideals. They merely peddled dreams to get votes and Ram Rajya remains but a dream.

K. G. Mashruwala, the author of Gandhi and Marx, has spelt out ten major features of Bapu’s Rama Rajya in rather realistic terms. These are: (i) a strong sense of common nationality among the people; (ii) peace and mutual trust among Hindus, Muslims and other communities; (iii) absence of friction among Indians based on class, creed, caste and language; (iv) promoting the principle of non-violent technique of resistance to injustice and aggressive designs by internal and external forces; (v) stress on decentralization to enable people to manage their own affairs without control and dictation from above; (vi) build a society which is not divided by castes; (vii) work for the development of people’s intellectual ability, personality and social instincts; (viii) every person be groomed as robust and healthy; (ix) ensure absence of sickness, hunger and unemployment; and (x) our national march
must be towards Universal education (The Pioneer, Lucknow, January 1, 1950).

K. J. Charles, a Professor of Economics, has opined that had the country taken Gandhi’s vision seriously, intelligently applying and adopting it, it would not only have brought about impressive improvement in the standards of living of the masses but would also have introduced a new and just economic and social system.

This thought process prevails among many Indians. However, in the absence of requisite political will, Indian leaders look for easy alternatives in a quest to catch up with the West. This has led to shortfalls in dream targets and policies. Today, we find that the people have no confidence in the fairness of the system.

The Gandhian dream of Ram Rajya thus remains shattered. It is not necessary to travel from Kanyakumari to the foothills of the Himalayas to arrive at these painful conclusions even after over 70 years of freedom.

Mercifully, some of its concepts are enshrined in the Directive Principles of State Policy, mentioned in Part IV of the Indian Constitution, but we have allowed things to drift and get politicized. It is foolhardy to hide the truth. Indian rulers need only to be true to their word, honest to themselves and the people, discover their traditional roots and move on to the modern path of logic and reason to regain the nation’s greatness and make it shine in the spiritual glow that goes far beyond the narrow canvas of caste, creed and religion.

Finally, I hope that Shri L. K. Advani’s golden words, that Ram Rajya is the “epitome of good governance”, serve as a reminder to Prime Minister Modi about the tasks still ahead of him.