By Malladi Rama Rao
And yet once again it is time to get ready for the Darshan of Darshans. From early November itself, Meherabad is getting ready for the Big Day. A very large area has been earmarked at the foot of the hill, along the rail track, for parking of vehicles. In the past, cars and taxis were allowed on the hill and had exclusive zone for ‘resting’ between the Archives and the Retreat. This time also you may still be able to drive up but once you get down, the vehicle will have to go to the new parking lot.

Jal Saheb (to me, but to Jal kaka to most others), who is the master of ceremonies at Meherabad, says the new arrangement is aimed at catering to the increased rush during Amartithi. When I was there for my usual year-end recharge, I noticed support structures going up to provide ‘cover’ in front of the meeting venue. In the past, the structures used to have a temporary look. This time around, these are of semi-permanent nature; it means they will have re-use value, and it also means less recurring expenditure for the cash strapped Trust.

One familiar face that greets you as you approach the Samadhi in the morning or evening is Shridhar Kelkar. I have not seen him on a short fuse in my years of acquaintance; he is always around with a big smile. He gives patient hearing to any one and he doesn’t avoid nosy journos like yours truly.

It is always a delight to listen to this Trustee, who has spent long time in insurance business. But I find it difficult to report what he says. In fact, I feel like not reporting at all. I am yet to report the interview he gave shortly before the 2010 Amartithi.

I must say to his credit, Shridhar saheb did not ask me about the interview. I too don’t have the big heart to tell him the truth. I couldn’t avoid telling Vani though when she pestered me like plague.

‘Why don’t you write in your column, in your features service, at least in Meher Baba magazine’, Vani cornered me as we were returning to Meher Colony after the evening ‘darshan’ on Dec 11. I tried to duck the bouncer without much success.

Minutes earlier we met Shridhar saheb at the Shrine. He greeted her who was on Prasad duty, and walked unto me where I was standing, and said with a big smile, ‘My greetings to you on Vani’s birthday’.

Now this was enough reason for Vani to insist on a direct reply to her question: ‘Why don’t you be a reporter and carry the interview with Shridhar Kaka?’

Well, I couldn’t stand her inquest. And blurted out: ‘I don’t report because I don’t want to change my job every year’

‘Honestly?’ she asked me in disbelief.

I nodded my head and continued walking in silence for the reminder of the distance to the rented home at Meher Colony.

Can you guess her remark when I put her in ‘the loop’?

It was not one remark but more than one. ‘Absurd, irrational, foolish…’. All because I said my last three job changes followed my ‘reporting’ of Shridhar Kelkar’s interview on Amartithi and on the run up to the Amartithi. 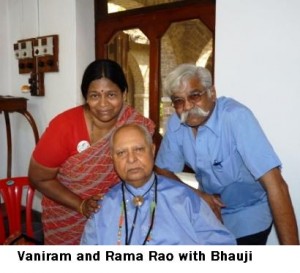 We both had a hearty laugh as she asked ‘what happened to your science’.

Still the fool in me refused to take a back seat. ‘Who is the fellow who will give a job to a 60-year-old fellow’, I asked.

Life is really funny. All these long years, I used to tell her not to worry about tomorrow and not to ruminate over yesterday. ‘Adopt scientific temper’, was my counsel. Today it is her turn to correct me. And it reminded me of a poem from Mahabharata, which a Telugu daily used to carry just above the editorial every day.

I don’t recollect the poem but I remember the meaning. It was that we should listen to advice from any quarter. Gandhiji summed up the message in his own way when he said ‘I do not want my house to be walled in on all sides and my windows to be stuffed ….’ The message greets you as you enter the Broadcasting House (All India Radio) in New Delhi, where I had spent long years.

While growing up in Narasaraopeta (Andhra Pradesh) I used to be the ‘in-house talker’ at the gatherings of Baba lovers. And I used the occasions to drive home the message Baba gave when Mehersthan was inaugurated.

Mehersthan on the western banks of River Godavary at Kovvur is the first shrine with a life-size bronze statue of Baba. It stands as a testimony to the love of Koduri Krishna Rao and commemorates the darshan Baba had given in the town in 1954 during his Andhra tour.

The shrine was thrown open to the public a year before my generation heard about Baba in 1964. And the darshan at the shrine is no mean compensation to the likes of me who are not lucky to have His physical darshan and are forced to be content with ‘replies’ to our letters.

Kovvur is not a big place but a visit to the temple will be an unforgettable experience. During the years I could not visit Meherabad because of my job in India’s northeastern border belt, Mehersthan was my consolation prize.

What strikes you at the shrine as you enter are the eight messages Baba had specially sent for display at Mehersthan. Two messages always interested me. Still do, in fact.

I don’t know whether I imbibed them or whether I tried to live upto them. Yet, I keep talking about them whenever and wherever opportunity comes my way.

One message says: ‘Tear away the curtain of set ceremonies and rituals…..’

Reads the second: ‘To clothe simple worship with garments of ceremony and rituals is to expose me to the cold winds of ignorance….’

I don’t know why I am drawn to these two messages. Probably it is because of my birth in an orthodox family where rituals are a part of every day life. May be it is His will.

Within a few years of hearing about Baba, my mother gave up her old practices. This decision of hers did not come in her way of visiting temples or attending religious gatherings. She used to say ‘every one will have their time to know. Let us not be impatient with anyone’.

I am reminded of mother today (Jan 22) as I write the column. Today is her death anniversary. And for the first time, I moved a step closer to her believes. Hopefully, in the process to lay claim to the privilege of walking up the Hill with a prayer on the lips, searching for love to fill the heart.

Not consciously, I can assure you. Certainly not after any deliberation….It just so happened – there were no ceremonies at home that usually mark a death anniversary but at the stroke of 1.30 in the afternoon, forty poor people enjoyed their lunch with no inkling whatsoever about the host.

Believe me I visited almost all major places of worship in India – in the north, south, east and the west. I was reminded of mother’s remarks every time I visited a place of worship. Every temple visit or a visit to dargah used to bring me face- to- face with the question- when will our friends learn and yearn to be with Baba.

Prof Jagadambi Rathod provided me an answer in his own inimitable way. The professor carries his intellect very lightly on his broad shoulders. Very unassuming Baba scholar he is.

‘Baba’s message’, he told me during my November visit to the Shrine of the Silent God, ‘is beyond the comprehension of the mind. It is not for every body. It is only for those few who have the privilege of hearing it’.

Prof Rathod, like his friend from Ajmer, Surinder Bhatnagar, is one of those gifted souls who can comprehend Him. And that is why every day, the Professor and his wife sing to their heart’s content sitting in the forecourt of the Shrine. Bhatnagar joins them with his own song whenever he is around.

The Professor gave me in his own handwriting an excerpt from Baba’s observations recorded in the Lord Meher. ‘Very thoughtfully’, I should say, because, I belong to a generation which reads less and less.

“My explanations are quite, quite different from the scriptures of any religion and they have nothing to do with the Shariat aspect of religions. If we find any illumination in scriptures, it is in the Hindu Shastras and Vedant. But they too are only the shadow of my explanations.

“None of the great masters in the past has given such explanations as I have. They were great masters, great prophets and they realizes so many souls. However, what they gave or left to the world was only Shariat sweet syrup. They only gave internal knowledge (gnosis) to their close disciples who were very, very few. What they said and what was written down to make books was only the knowledge and rules of rituals and ceremonies, appealing to the ordinary minds of the time.

“What I give is the explanation of the knowledge that is beyond the scope of the ordinary intellect to grasp to understand. Even though these explanations are mere shadows of the real knowledge, they are beyond mind to follow.

“What I explain is a subject beyond the comprehension of the mind and that only to those who are prepared to digest it, not to everybody. For all can neither grasp it nor tolerate it nor even bear to hear it.” -Lord Meher, Vol 3, Page 834-835 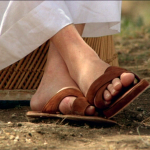 I rest my case.

This column is seeing the light because of a young girl and her expertise on computer. I call her Oopar Vali (the girl from above) because she lives in the flat above my flat with her engineer- husband. I call her Sachi because her husband is Devender.

In the Hindu mythology, Inder, also known as Indra and Devender, is the God, who rules heaven. His lovely wife is Sachi. Our Sachi is from Allahabad (pronounced Illahabad in Hindi), the city, where three rivers meet – Ganga, Yamuna and Saraswati, and which gave to Independent India its first political dynasty- the Nehrus.

Every time she drops in, she has one complaint- when will you remember my name – not by the name you want to call me. I promise her that I would next time.

Pallavi is still waiting for the next time, with patience….