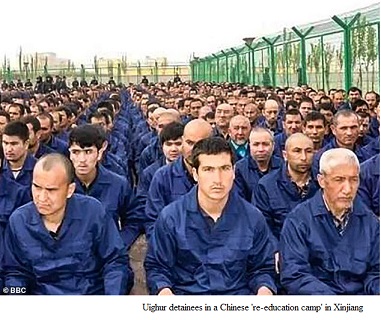 British taxpayers are providing £2.5 billion of backing to a Beijing-based bank run by an ex-member of Chairman Mao’s Red Guards, The Mail on Sunday can reveal.

Among the projects financed by the Asian Infrastructure Investment Bank (AIIB) is a firm with links to alleged abuses of Uighur Muslims.

The UK’s involvement with the AIIB dates back to David Cameron’s coalition government. At that time, the then Chancellor George Osborne was keen to cosy up to the Chinese, viewing them as potentially lucrative trade partners.

Since then, however, there have been increasing concerns about China’s expansionist policies and its involvement in key UK industries such as telecoms and nuclear power.

Britain’s representative on the AIIB board is Sir Danny Alexander, the former Chief Secretary to the Treasury who was Osborne’s right-hand man.

The AIIB is China’s answer to the World Bank, a Washington institution dedicated to helping developing countries. It has more than 100 member nations – including Vladimir Putin’s Russia – and is run by Jin Liqun, formerly of the Communist Red Guards.

Other leading Western nations including the US and Japan have declined to join the bank, which counts China as its largest shareholder. Its gleaming headquarters are just a stone’s throw from the celebrated Bird’s Nest Olympic stadium.

Questions are mounting over why British taxpayers are still backing the Beijing-based bank, given the changed geopolitical climate. These are likely to intensify following revelations the AIIB has funnelled money to Haier Group, a Chinese manufacturer with links to alleged Uighur abuses in China.

Tory MP Bob Seely, a member of the influential Foreign Affairs Committee, said: ‘If this is true then it’s simply shocking that you have got a bank in which the British taxpayer has a significant holding and a major company receiving funds that is being accused of some pretty grotesque modern slavery offences. It’s simply shocking

‘We have got to get wise and we’ve got to ensure that when we work with China, we don’t make ourselves complicit in serious and significant human rights abuses. It’s just not acceptable.’

Documents show that in July 2022, the bank handed almost £100 million to a subsidiary of Haier, which owns famous appliance brands such as Candy and Hoover.

That was despite a United Nations-backed organisation writing to Haier’s chief executive in 2021, expressing concerns over the company’s treatment of Uighur and other minority workers ‘within and outside the Xinjiang region’.

Since becoming a founding member of the AIIB in 2015, Britain has committed billions of pounds to the bank in exchange for a 3 per cent voting share. This was part of a push for closer ties with Xi Jinping’s China almost ten years ago, which was spearheaded by the Cameron government despite protests from the US.

The White House said in 2015 it had ‘concerns’ over whether the AIIB would meet ‘high standards of governance, environmental and social safeguards’.

Relations have since soured significantly between Beijing and the West.

Tensions have arisen over reports that China has detained more than one million Uighurs and over the crackdown on pro-democracy protests in Hong Kong. The UK’s stance on Chinese investment has also hardened over the last 12 months.

The Government recently forced a China-backed company to offload chip business Newport Wafer Fab, though other deals have been given a green light.

After losing his seat in the 2015 election, Alexander, who had no leadership experience at a development bank, was the surprise choice to look after the UK’s interests at the AIIB.

The last job he had before entering Parliament was as head of communications for the Cairngorms National Park. Now aged 50, he is a vice president of the AIIB and based in Beijing with his wife Rebecca and their two children. Despite the AIIB’s stated commitment to transparency and accountability, his salary remains undisclosed.

It is also unclear how UK taxpayers have benefited from their support for the AIIB. Much of the bank’s work is to fund costly projects in faraway countries – at a time when budgets in the UK are under extreme pressure.

The bank approved 44 projects last year, six of which were in China and worth over £500million.

A further £400 million is earmarked to provide a second runway at a remote airport in south west China. Other countries to benefit from AIIB-backed projects include India, Egypt and Uzbekistan.

A Treasury spokesman said: ‘The AIIB has 105 members globally and is focused on improving infrastructure and fostering sustainable growth in its region in cooperation with established multilateral development banks. The Government works closely with the AIIB and other shareholders to ensure its investments are in line with international standards and best practice.’