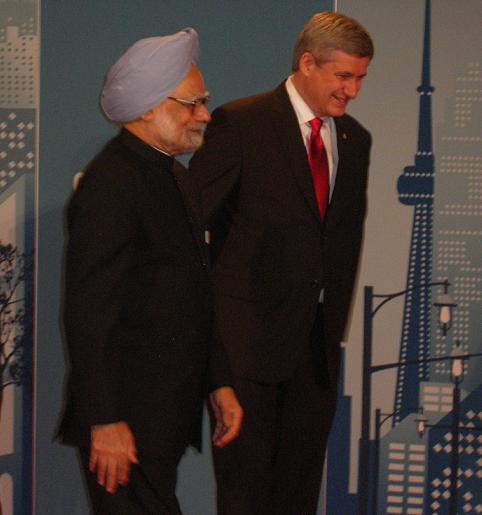 By Nick Beams
Leaders of the world’s major economies sought to paper over their differences on a series of key issues at the Group of 20 (G20) summit meeting held in Toronto over the weekend.

On the crucial question of fiscal stimulus versus austerity measures, which divided Germany and the other European powers from the US in the lead-up to the summit, the G20 communiqué called for a shift in policy toward deficit and debt reduction but added that this agenda had to be “tailored to national circumstances”.

Following the eurozone crisis in May, the German government insisted that the financial turmoil meant governments had to cut deficits and reduce debt. The US, on the other hand, fearful that austerity measures would lead to low growth or even recession in Europe and jeopardise US export markets, warned that too rapid a withdrawal of government spending could threaten global “recovery”.

The communiqué called for governments to halve their budget deficits by 2013 and for the ratio of national debt to gross domestic product to be stabilised by 2016. This was seen as a win for Germany and other countries backing deficit reduction. But the document made clear that these targets were not binding and, in a concession to the US, expressed the hope that governments would follow “growth-friendly fiscal consolidation plans”.

In a further bid to walk both sides of the street at the same time, the communiqué declared: “There is a risk that synchronised fiscal adjustment across several major economies could adversely impact the recovery. There is also the risk that failure to implement consolidation where necessary would undermine confidence and hamper growth.”

Other sharp differences were also put on hold. The planned introduction of rules to make banks increase their capital holdings in order to better withstand future financial turbulence was delayed because of conflicts between the US and Europe.

Having strengthened and consolidated its major banks, through a series of mergers and government-funded bailouts, the US has been pushing for the new rules to apply by the end of 2012. But European governments, whose banks remain severely weakened as a result of the losses incurred in the financial crisis—not least as a result of the worthless assets they purchased from US institutions—want to slow the process down. They fear that if the new rules are introduced too rapidly, stronger American banks will make further inroads into European markets. Consequently, European governments have been pushing for a delay by raising differences over what assets can be included when determining the capital base of the banks.

The G20 communiqué sought to sidestep the dispute by declaring that the previous target of the end of 2012 for the introduction of the new regulations was an “aim”. “We agreed that all members will adopt the new standards and these will be phased in over a timeframe that is consistent with sustained recovery and limited market disruption,” the communiqué said.

A proposal for a bank levy to help pay for the cost of bailout operations, initiated by Germany and other European powers, was scuttled. The communiqué expressed support for making the financial sector pay “fair and substantial” contributions toward government interventions but added: “Some countries are pursuing a financial levy. Other countries are pursuing other approaches.” Referring to the levy proposal, an official noted that the parrot was not sleeping; it was well and truly dead.

Earlier, a meeting of the Group of 8 (G-8) leaders also spotlighted the inability of the major powers to reach agreement on any significant economic issue. All references to the need to complete the Doha Round of trade talks were dropped from the communiqué issued from the G-8 meeting on Friday and Saturday. The trade round, which began in 2001, has been stalled for two years and there are no signs of progress.

In the absence of any sign of agreement on the Doha talks, the G-8 communiqué referred to bilateral deals for the first time: “We will continue to resist protectionist pressures and to promote liberalisation of trade and investment under the WTO [World Trade Organisation] through the national reduction of barriers as well as through bilateral and regional negotiations.”

The reference to bilateral and regional deals is significant because international trade experts generally consider that such agreements contain the danger of a shift to trade blocs, fracturing the unity of the global market.

The G20 resolution on fiscal consolidation allowed all sides to claim a victory even as the differences widen. German chancellor Angela Merkel said the outcome was “more than I expected”. She claimed that the views of continental Europe had prevailed. German officials noted that the US had learned its lesson about writing public letters that sought to change the position of others. In the lead up to the summit, Obama issued a letter to G20 participants warning that too rapid fiscal tightening could impede global recovery. He noted that earlier G20 agreements had pointed to the need for export surplus countries—a reference to Germany and China—to increase domestic demand.

The letter sparked a trans-Atlantic war of words. Public figures such as Nobel economics laureate Paul Krugman entered the fray, warning that German policies could lead to increased unemployment. German government spokesmen insisted on the necessity for deficit reduction in the wake of the eurozone financial crisis.

In a comment piece published in the Financial Times on June 23, German finance minister Wolfgang Schäuble defended the Merkel government’s deficit reduction program—an €80 billion cut over the next four years—as necessary to “inspire confidence in our citizens and investors that the state can cope with the current situation”.

Making clear that the austerity measures are a direct response to the dictates of the banks and financial markets, he concluded: “Without this confidence there can be no durable growth. This is the lesson of the recent crisis. This is what financial markets, in their unambiguous reaction to excessive budget deficits, are telling us and our partners in Europe and elsewhere.”

The following day, the Financial Times published a comment by billionaire financier George Soros warning of the possible consequences of austerity measures. “The policies being imposed on the eurozone,” he wrote, “directly contradict the lessons learnt from the Great Depression of the 1930s, and risk pushing Europe into a period of prolonged stagnation or worse. That, in turn, would generate discontent and social unrest. In a worst case scenario, the EU could be paralysed or destroyed by the rise of xenophobic and nationalist extremism.”

In an editorial on the conflict published on June 25, the Financial Times concluded: “Without more G20 solidarity, global politics could soon become nastier than mere bickering.”

But rather than increased cohesion, the Toronto summit, notwithstanding the best efforts of the communiqué drafters, highlighted the growing divergences among the major capitalist powers.