No free lunch, Biden must tell WHO 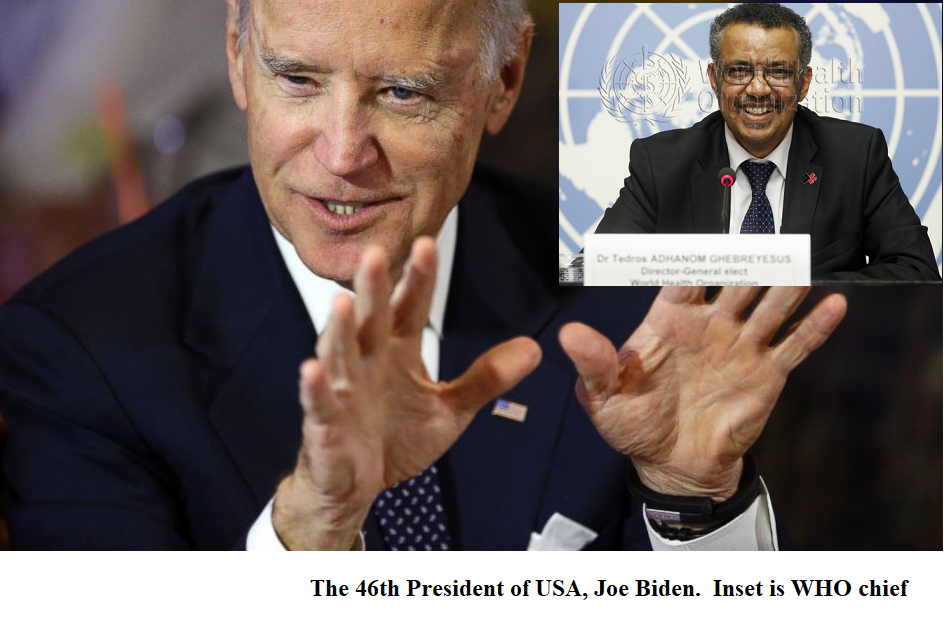 Home » News » No free lunch, Biden must tell WHO

The Biden era has begun in the United States of America. The incoming 46th President has made a slew of promises while assuring the Americans and the world at large that he would grapple with the issues left behind by his predecessor, who, while masquerading as the new age messiah with his tweets for five years, has left behind a caustic legacy.

Put simply, Joe Biden has no time to waste particularly on the Covid-19 pandemic and the consequent economic crisis that have made America appear as a pale replica of itself.  His $1.9tn rescue plan is a step in the right direction, more so as he has decided to pour in $400 billion toward combating the virus with an army of 100,000 public health workers.

Given this reality check, the new US President should revisit his plans he had announced in the run up to his inauguration that the US would re-join WHO on the first day of his office.

Neither China, from where the virus originated, nor the World Health Organisation, (WHO), which, by virtue of its mandate should be at the forefront of the anti-corona campaign, has risen to the occasion. There is indeed a calibrated attempt by China to cover its tracks; WHO, for reasons that are still wrapped in a mystery riddle, allowed itself to become an adjunct of Beijing to the dismay of the entire world.

In a manner of speaking, Director General Tedros Adhanom Ghebreyesus with his actions has offered enough justification for Donald Trump’s decision to walk out of the WHO after cutting the US aid to the UN entity.  That decision became a shining example of Trumpism which has become synonymous with reprehensible short-term pursuits.

In a manner of speaking, Director General Tedros Adhanom Ghebreyesus with his actions has offered enough justification for Donald Trump’s decision to walk out of the WHO after cutting the US aid to the UN entity. That decision became a shining example of Trumpism which has become synonymous with reprehensible short-term pursuits.

Howsoever caustic this legacy may prove to be, it is difficult to deny that Trump’s diatribe against WHO and China is justified by the latest Dragon act when a WHO team planned to investigate the origins of the Covid-19 in Wuhan.

First it delayed permission for the ten -member team led by Peter Ben Embarek, the leading expert on animal diseases that cross the species barrier.  Then two members of his team were not cleared even as the Chinese Foreign Ministry spokesperson Hua Chunying had gone on record to say “China has always held an open, transparent and responsible attitude and taken the lead in working together with WHO on virus origin-tracing”.

WHO should have sent the probe mission either in end 2019 or early 2020 – the period when Wuhan was in the grip of the pandemic.  Tedros visited Beijing in January 2020 no doubt but his discussions with Foreign Minister Wang Yi and other officials made him no wiser on how the pandemic started.

It was only at the end of October (2020), a team of WHO researchers managed to sit down – virtually – with a group of Chinese experts to kick-off a long-term in-depth study into the origins of the coronavirus and how it entered the human population. This discussion paved the way for the January visit for an in-depth “epidemiologic, virologic, serologic assessments” of people and animals.

The Peter Ben Embarek team’s terms of reference are a clear give away to the tardy response of the global health body.

“As the pandemic continues to unfold, understanding how the epidemic began is essential to prevent further SARS-CoV-2 virus introductions and help prevent introductions of new viruses in the future,” says the terms of reference. It blandly admits that “very little is currently known about how, where and when the virus started circulation in Wuhan.”

There is as yet not much data from the early days of the outbreak, including the type and number of animals sold in Wuhan as well as the travel history and other exposure factors of people who worked and shopped there. All this might make the WHO probe a ‘Mission Impossible’ to the delight of their hosts, since they have “cleaned up” the chief virus cluster, like a “crime scene”.

The WHO follies have enabled President Xi’s government to go the town with an alternative narrative, “cherry-picking data from global studies” to contend that China is Lilly-white on Corona front.

Given this reality check, the new US President should revisit his plans he had announced in the run up to his inauguration that the US would re-join WHO on the first day of his office.

The WHO track record is very much in public domain. It can neither be wished away nor ignored. WHO chief Tedros has spoiled his copybook by parroting Chinese propaganda, and by going along with their contention in the early days that China is not facing an epidemic.

Frankly, the return of the US to the WHO is not a bad idea. But it cannot be done unconditionally.

The Democratic President will do well to make Washington’s re-entry conditional to reforms in the global health body. It must be tailor made to ending the apparent stranglehold of China.

Joe Biden has the opportunity to achieve this goal. Donald Trump had correctly diagnosed the WHO ills as its deference to the China Communist Party (CCP) but his isolationist policies made the US appear as an unreliable donor, and pushed Tedros into the lap of the Dragon, which has already endeared itself to his home turf -Africa – by loosening its purse strings.

With the US money, experts, vaccines and above all his own credibility, President Biden should help the WHO to return to its basics.

And must compel the world body to   show its commitment to “putting together a credible and transparent investigation” into China’s responsibility for the pandemic that turned 2020 into a nightmare for everyone.

—By Magda Lipan
The writer is a management consultant based in Boston, US.
She can be reached at email: magda.lipan@gmail.com

BRIEF BIO
Magda Lipan Is a keen blogger but hits the blog-space at irregular intervals. She frequents Asia and Far East on business trips. Her subjects of interest are wide ranging from economy to health and from China’s debt to Philippines’s maverick rulers