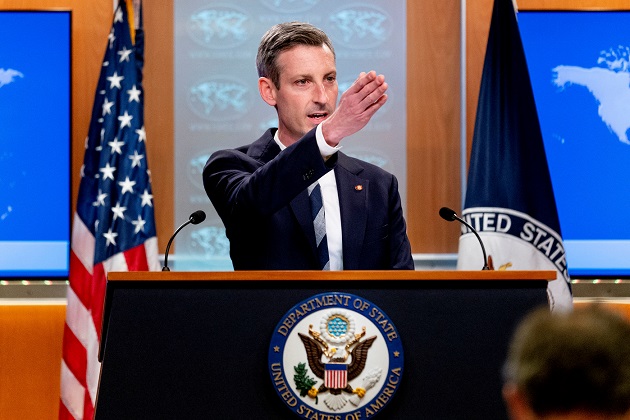 State Dept spokesperson Ned Price held a Press Briefing on January 23, 2023, and fielded a wide range of questions on India, Pakistan and Afghanistan amongst others. The Q- A on South Asian region are brought upfront by tweaking the transcript.

QUESTION:  Ned. Last week I had asked you about Narendra Modi and how the U.S. has compromised on some of its values. And the BBC just released a documentary on Modi on how he had butchered, and the report was just released. It was a government report. BBC just released it. It was made by a former secretary in which he has even mentioned higher number of deaths, higher numbers of women raped, and it was just done right under the nose of Narendra Modi. I don’t – I have never challenged the strategic interest of the U.S. with India, but I regret the fact that since last eight years that I have been covering the State Department I have not seen once an senior official standing here at your seat condemning Narendra Modi himself individually – not just as a prime minister but individually his acts. And I’m sure the U.S. officials were aware of it as well.

MR PRICE: I am not aware of this documentary that you point to, but I – what I will say broadly is that there are a number of elements that undergird the global strategic partnership that we have with our Indian partners. There are close political ties, there are economic ties, there are exceptionally deep people-to-people ties between the United States and India. But one of those additional elements are the values that we share, the values that are common to American democracy and to Indian democracy.

QUESTION: My godfather is an Indian as well, by the way, so I have all the respect for India. Don’t get me wrong or anything. But I just regret the fact that how is it possible that State Department officials who were posted there at that time did not know that this individual, who was a former chief minister, he is – it happened right under his nose. Two thousand people were burned alive.

MR PRICE: Again, I’m not familiar with the documentary you’re referring to. I am very familiar with the shared values that connect the United States and India as two thriving, vibrant democracies. When we have concerns about actions that are taken in India, we’ve voiced those. We’ve had an occasion to do that. But we want first and foremost to reinforce those values that are at the heart of our relationship.

QUESTION: One follow-up. But does – do you think that such foreign policy has affected President Biden’s Indian voters here in the U.S., though?

QUESTION: Sir, Pakistani Prime Minister Shehbaz Sharif has called for the peace talks with India. He says that he’s ready to talk about all the burning issues, including Kashmir, but India rejected that offer. They say this is not, like, the right time to talk about these issues. What are your comments on that? Because you always talk about the peace and stability in the region.

QUESTION: On the Taliban?

MR PRICE: Sure. I just want to be very clear on the premise of your question. It is certainly not the case that we have provided the Taliban with any support whatsoever. And in fact, we have gone to great lengths to continue to be the world’s leading humanitarian provider to the people of Afghanistan in a way that doesn’t flow through the coffers of the Taliban. We’ve provided about $1.1 billion worth of humanitarian assistance to the Afghan people, not to the Taliban, not to any entity purporting to represent or to serve as the Government of Afghanistan for that very reason.

When it comes to the trust fund that we established, we established a trust fund so – precisely so that this funding would not be able to be diverted to the Taliban and to use for their own ends. The trust fund – the $3.5 billion in the so-called Afghan Fund that we established is for broader macroeconomic stability, again, for the people of Afghanistan but certainly not to support the Taliban in any way. Much to the contrary, we’ve been reviewing our approach and engagement with the Taliban in the context of many of the human rights violations, the draconian edicts, the repugnant actions that we’ve seen from the Taliban in recent weeks and in recent months. I’m just not in a position to detail where we are in that process, but I can tell you we are actively evaluating with allies and partners the appropriate next steps.

We’ve been clear that there will be costs for the Taliban for these actions. Absolutely everything remains on the table. And we’re looking at a range of options that will allow us to maintain our position as – principled position as the single largest donor of humanitarian assistance in Afghanistan – again, that’s funding that goes directly to the Afghan people – while also doing everything we can to prevent the humanitarian situation from deteriorating even further. These responses take some time. They involve significant coordination with our allies, with international partners, and Afghan women themselves. We have been in touch with senior UN officials as well. There have been delegations from the UN to Afghanistan to investigate the situation and to be a constructive force vis-à-vis what we’ve seen from the Taliban. But the human – humanitarian and human rights communities, there’s no question, are facing extremely difficult options as they strive to help those in dire need while also remaining neutral, impartial, and independent in their provision of support to the Afghan people. Because, as a result of these edicts, men are not allowed to enter women-headed households, NGOs cannot reach most of the most vulnerable inside of Afghanistan, including in women-run households and mothers who must maintain adequate nutrition for their new born babies without female workers present.

As of earlier this month, about 83 percent of organizations operating in Afghanistan have suspended or reduced their operations because they came to the conclusion that they could not do their work under these new edicts. This is unacceptable to us, but more importantly to the international community, because it imperils some 28 million Afghans who need this humanitarian assistance to survive, and especially women and children, those who are especially vulnerable. So, we’re firmly committed to helping alleviate the suffering of the Afghan people. And as I mentioned before, we’ve been the world’s leading humanitarian provider – $1.1 billion in assistance since August of 2021to provide critical aid. And I have no doubt that we’ll continue to do everything we can to support the weighty humanitarian needs of the Afghan people.

MR PRICE: This money is not flowing to or through the Taliban. It is being administered by NGO partners on the ground – or I should say it has been administered by NGO partners on the ground, and I say “has” because of the challenge we’re facing now, these draconian edicts on the part of the Taliban, including an edict propagated on Christmas Eve of last year that NGOs couldn’t work with women, had to work with men. Of course, that is an unsustainable obligation, restriction on the part of many international NGOs, and we’ve seen many international NGOs come to the conclusion that they’re just not in a position to continue providing this aid to the Afghan people. We’re going to do what we can to see to it that these edicts are reversed using the leverage that we have to seek to accomplish that, but also to do everything we can to continue to provide humanitarian assistance to the Afghan people in the context of these restrictions and edicts.

QUESTION: Thank you so much. Jahanzaib Ali from ARY News, Pakistan. This is about press freedom again. Our director of news – of ARY News, Ammad Yousaf, is facing criminal charges for just doing his job. He’s also being dragged for extradition case, which can get him a death sentence. And we talked about this press freedom many times. Your thoughts on that, please?

MR PRICE: We have discussed it many times, and each time you’ve heard of the emphasis we place on press freedom around the world. Free press and informed citizenry are key for any nation and its democratic identity, its democratic future, the democratic aspirations of its own people. We routinely raise our concerns about press freedom to governments, to stakeholders all around the world. When it comes to this particular case, would need to refer you to the Government of Pakistan.

MR PRICE: We are, of course, open to and would work with any elected government in Pakistan. Pakistan is a partner of ours; we share a number of interests. We have demonstrated our desire to see constructive relations with Pakistan over the course of successive governments. As we have said in different contexts, we judge governments by the policies they pursue. It would ultimately be a question of the type of policy that any future government of Pakistan might pursue.

QUESTION: If I could follow up on that – on today’s human rights sanctions, do you have any indications that the designations of Iranian officials are having an impact internally, including on the security force’s behaviour?

MR PRICE: It is always difficult to delve into a hypothetical or a counterfactual like that. We want to send – and I think we are sending – a very clear message to the Iranian regime – two messages, really: that the world is watching, and the world is prepared to take action in response to the violence that Iranian officials are perpetrating against their own people. This is not the first round of sanctions that we have announced against Iranian officials in response to the protests that we’ve seen in Iran since late last year. If Iran continues to engage in these human rights abuses, we will continue to apply even more pressure on Iran. But of course, this is about human rights.

We have other concerns with this regime, and we are going to use every relevant and appropriate authority to hold it account on the various fronts, from human rights to its provision of UAV technology to Russia, to the challenges that are posed by its nuclear program, to its support for terrorist groups and proxies as well.#####